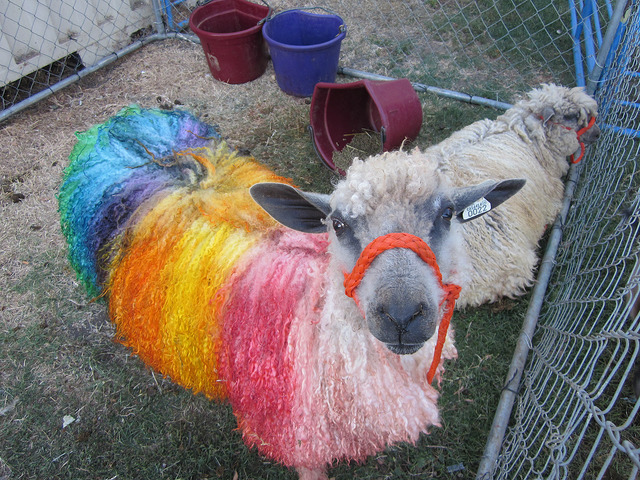 The rainbow sheep of the family

I was 18 years old when I first discovered that I was a lesbian. I think the signs were there earlier on but I wasn’t aware of what it was that I was feeling at that time. One of my earliest memories was when I was 16 and I remember having to lie about who my crush was at school, just so that I could fit in with the rest. For a very long time I was left feeling confused, isolated and so alone; it felt like I was the only one going through this internal struggle of being Muslim and lesbian. I knew that it was something that was seen to be forbidden in Islam. It felt like the two words Muslim and lesbian didn’t go together. It literally was eating away me bit by bit. It felt like I had to make a choice to either be one or the other. In my mind no matter how much I tried to suppress it, that feeling wasn’t going away.

One day when I returned home from university, something that day just didn’t feel quite right. I went in my bedroom and you know that feeling that you have when you know where everything is in your room but something that day feels out of place. That evening when my dad went out that is when it all started, my mum started to rip into me as she had read my diary and found out about my sexuality; at that time it was the only outlet that I had to express myself.

She was saying all these horrible things to me like she only had three children instead of four. I had a heart attack when I was 16 years old. She said it would have been better if I had died from it. She said a lot of things that are too painful to recall. She treated me like I had a disease and I didn’t know what to do, I didn’t know who to turn to or where to go. She threatened to throw me out of the house, I was so scared that I wouldn’t have anywhere to go. The things that she said to me that day still scar me to this day.

The honour abuse continued for over four years. I was constantly put down about my looks, my sexuality. I was mocked, criticised and made to feel like a failure. I was told that I wouldn’t amount to anything and I felt so worthless. I had hit absolute rock bottom and hardly had any self-esteem and self-confidence left.

I fell into severe depression because my mum would not accept me for who I am. A mother’s love is supposed to be unconditional, well that is what I thought – but it wasn’t. I was so isolated at home, it felt more like a prison to me. I felt trapped and suffocated. My mum used to go through my letters, bank statements, my belongings, she used to eaves drop into my conversations, you name it, she did it. No one once stepped in and stood up for me. No one once told my mum to stop.

My mum didn’t have any respect for me or my belongings and overtime I started to drift further and further away from my family. I literally felt like I was the rainbow sheep in the family.
I lived a very sheltered life. My family knew the times that I started and finished university so I didn’t have a social life. I wasn’t allowed to see my friends because my mum thought that they were gay and that would turn me gay too, when my sisters were allowed to see their friends because their friends were straight It got really bad to the point that when I even stepped out of my university I didn’t even know where I was.

I couldn’t go to my family doctor as she had made some very unprofessional comments in the past to my family members. I was scared of opening up to her in case she outed me, I didn’t trust her at all.I had to get counselling undercover. Once a letter was sent home about me getting counselling. My mum got to it first and read it, she said the only reason I could get counselling was if it was going to turn me straight. It was a real struggle getting the counselling that I needed.

Over time things were getting worse and I couldn’t cope anymore, I needed some help and support so I typed something along the lines of LGBT Muslim into Google and to my surprise Imaan, which is a support group for LGBTQ+ Muslims, came up. I joined the forum and wrote a post and from there people started talking to me. It was such a huge relief for me to have people to talk to who were in similar situations as me. When I went to my first meet-up which was for women only, I loved it so much. I finally felt like I could be me and that I didn’t have to hold back. I was amongst people who knew what it was like to be going through those issues and I didn’t have to explain myself. I went to the meet-ups as and when I could as I was living a restricted life because my mum would sabotage my plans. Whenever I wanted to go out she would get my family to tag along in order for her to keep an eye on me.

The hardest decision I have ever made in my life was leaving my family. It wasn’t something that I did lightly. My first partner was very abusive and used emotional blackmail to get me to leave home. That is a story for another day but the end result was that I went back home eventually. Over time my relationship with my family improved and is continuing to do so. I am finally being true to myself. I am finally being me.

I am very passionate about issues related to the LGBT+ community, honour abuse, domestic violence, forced marriage and mental health. I am very passionate about helping others by sharing my experiences with them so that they know they are not alone in this. I have been there and I know what it is like. It is a challenge in itself to be a minority within a minority but I am using that position to help be the voice for the voiceless.