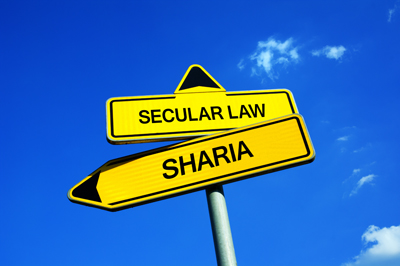 Complacency about sharia is a threat to women’s rights

Recent scenes of a British candidate wearing hijab in a beauty pageant were proudly presented by British media. To me, this seems nothing more than another façade of an ugly reality that is plaguing British society: the constant exploitation of Muslim women at the hands of religious fanatics. The ideology suppressing women and stifling their rights in the name of culture and religion is barely concealed under layers of make-up and dazzling dresses worn at beauty contests.

The exploitation of women in sharia courts in England and Wales has once again sparked fury among rights activists. They have called on the UK Ministry of Justice to stop ‘pushing minority women towards religious courts’. A letter to the Ministry addressed the issue of women being pressurised to turn to religious bodies for guidance in matters related to divorce. It was signed by Gita Sahgal, Director of the Centre for Secular Space; women’s rights campaigners Southall Black Sisters; Yasmin Rehman; Maryam Namazie, spokesperson for One Law for All; and Amina Lone, amongst others.

Form D8, the application form for a divorce in the UK states, ‘If you entered into a religious marriage as well as a civil marriage, these divorce proceedings may not dissolve the religious part of your marriage. It is important that you contact the relevant religious authority and seek further guidance if you are unsure.’

Women are often bullied into giving up their rights to register their marriage in civil court and thus feel bound to bring all their marital affairs to the sharia councils for resolution through religious guidance. Proceedings in sharia councils are costly, wearing, unnecessarily lengthy, misogynistic and cause further distress to women who are already suffering. There are around 85 sharia councils in the UK, effectively working as a parallel justice system across the country. There is no mechanism by which these councils are scrutinised. They operate with impunity and often deprive women of the legal protections of civil marriage.

In broad terms, sharia proceedings can never be consistent with UK law because secular law mandates equality for men and women. In Islamic jurisprudence, men can divorce women easily by pronouncing themselves divorced three times before they go through the formality of obtaining divorce papers. Ironically, Islamic ‘instant’ divorce (triple talaq, i.e., divorce achieved by a husband stating ‘I divorce you’ three times) is banned in most Muslim countries and considered illegal under EU law but is still practiced in Britain.

The whole sharia system is based in Islamic laws and traditions which include women’s testimony being worth half that of a man, unfair child custody practices, the acceptance of polygamy, no robust age of consent and the expectation of male guardianship. This sits alongside the prevalence of various forms of violence against women, such as forced marriage, marital rape and domestic abuse. Islamic jurisprudence doesn’t grant women equal rights. Muslim women in Tunisia are fighting for an equal share in inheritance which isn’t provided under current Qur’an based jurisprudence.

In 2017, BBC reported a ‘halala’ scandal in which a divorced Muslim woman has to pay to marry and have sex with another man in order to remarry her first husband after divorce. Many abusers have been reportedly providing these online ‘halala’ services and are thus sexually abusing Muslim women under the noses of the authorities.

This vicious cycle of sexually abusing women seems unceasing. This ritual is endorsed by some Islamic sects and some sharia councils consider it acceptable even in liberal Britain. Women who complain about men having more than one wife are lectured on the ‘scientific and biological reasons for polygamy’ by sharia clerics and forced to accept living in polygamous marriages.

The UK Home Office has rejected proposals to regulate these councils, fearing that regulation could endorse these councils’ proceedings as a legitimate alternative to UK law. Nevertheless, sharia councils are working in the capacity of a parallel judicial system that arranges hearings, charges fees, and issues judgment on marital matters.

Ignoring the existence of such a parallel system is negligent on the part of the UK authorities. We cannot even estimate how many times Muslim women have to go through religious courts that frequently endorse the sexual, physical, and mental exploitation of Muslim women. This mind-set provides impunity to some men in minority groups and allows them to ruin the lives of children and women.

People living in the free world need to respect Muslim women’s tireless struggle for justice. Only one law based on secular values can safeguard women’s human rights, regardless of their faith, caste, creed or colour. It is time to end the complacency about discrimination against Muslim women within their own religious communities.