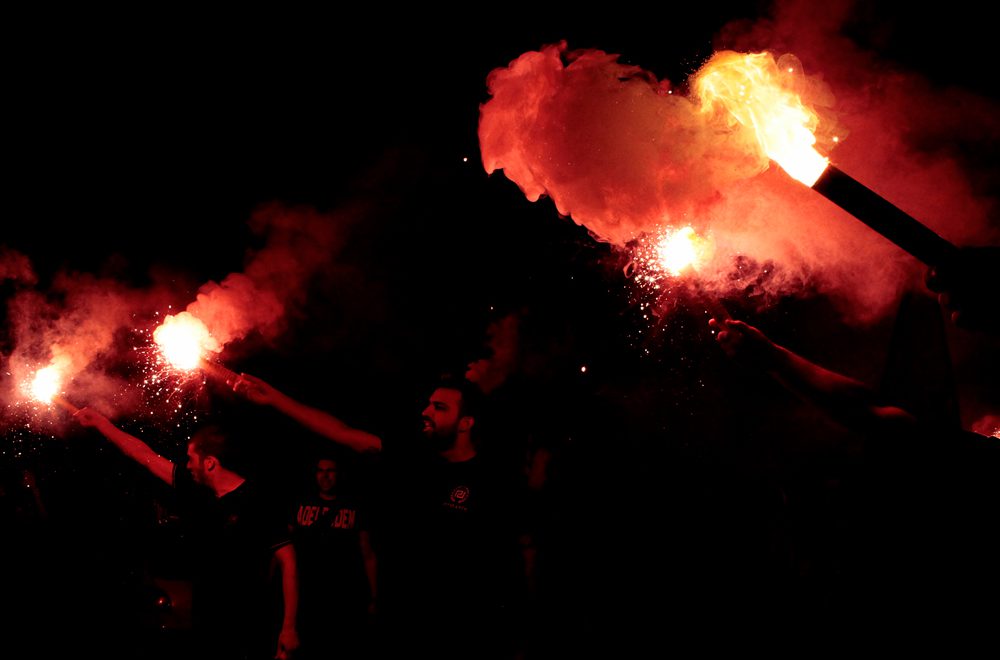 Human beings are prone to persuasion. If this persuasion has a political or religious leaning, it can be persistent to the extent of becoming equivalent to brainwashing. At first, such indoctrination may appear superficially innocuous but it can have huge potential for radicalisation when combined with hate, prejudice, racism, superiority complexes and revenge or victimhood-based propaganda. Individuals’ personal grievances shape a socio-political framework in which propaganda-based radicalisation spreads efficiently. Aggressive waves of radicalisation further polarize public opinions.

We are currently facing an imminent threat of ever-growing extremism, due to political radicalisation spread under the banners of inherently intolerant and fascist ideologies such as right-wing extremism, neo-Nazism and Islamism. These ideologies thrive on radicalizing people through hatred and prejudice. Conflating a respect for difference with political correctness is counterproductive.

The recent wave of terror attacks against Muslim, Christian and Jewish worshippers amplifies this phenomenon: those accused of targeting religious minorities were highly radicalised by their respective ideologies. White supremacist terrorist Brenton Harrison Tarrant killed 49 Muslim worshipers and wounded dozens of others in a mass shootings at two New Zealand mosques. In Sri Lanka, a well-co-ordinated Islamist-inspired attack claimed nearly 300 lives, including Christian worshipers and school-aged children on Easter Day. A devastating shooting at a California synagogue killed a woman and injured several other worshippers who were celebrating the last day of Passover.

John T. Earnest, who carried out the shooting at the California synagogue reportedly wrote an anti-Semitic manifesto praising Brenton Tarrant, the Australian gunman accused of the Christchurch massacre. Sri Lankan Islamist terrorists referenced ISIS’s propaganda, pledging their alliance to the so-called Islamic State before carrying out their bombing attacks.

These attacks showcase one common pattern: these terrorists may live miles apart, but they share similar hateful influences. They seek to promulgate their hateful ideologies by targeting as many innocent people as they can, choosing soft targets such as places of worship.

These extremists have been radicalised into believing that their ideology is superior to all others, that their efforts to impose that ideology are essential, and that this can be achieved through a rampage of horrific crimes against humanity. Ultimately all of this violence is deemed to be justified in the name of an individual, or an idea – or a God.

This demonstrates the pressing need for people to stop drawing false distinctions between these intolerant ideologies. Islamism that propagates an extremist and politicised version of religion can be just as dangerous as any other ideology which calls for the killing of innocent people on the basis of religion or race, nationality or ethnicity. Be they white or Islamist, supremacists are on the march.

We cannot turn away from these extremist ideologies by making false comparisons as to which ideology is more threatening to humanity. Yet, in the aftermath of the recent terror, commentators seem to be selectively redefining the threats of terrorism posed by different extremist ideologies, by making statements implying that right wing extremism has replaced Islamist terrorism, or that Islamic terrorism remains the world’s greatest threat to peace. Some news analysis have suggested that Muslims and Jews face a common threat from white supremacists or that the Islamist attack in Sri Lanka ‘in several ways simply makes no sense’, as if Islamism is no longer a terror threat.

The comparison between ideologies may help us find the common traits shared by terrorists across identities that draw vulnerable people on the path of radicalisation. However, highlighting one terror incident while making another appear as a lesser evil takes us down a slippery slope; the ultimate outcome becomes denial. With a never-ending blame game in ideological discourse, people start pretending that the problem of radicalisation doesn’t even exist in the first place. As Juliette Kayyem, Harvard Professor and CNN analyst rightly pointed out, ‘Ideologies don’t die. They get shamed. A simple verbal allegiance to such groups can make terrorists feel themselves to be part of a greater agenda.

Islamic state leader, Abu Bakr al-Baghdadi has reappeared in a video where he stated, ‘Truthfully, the battle of Islam and its people against the Cross and its people is a long battle. This was a clear reference to the Easter bombing in Sri Lanka. The message to fight against ‘non-believers’ and the ruthless crackdown on dissenters has been core to the agenda of the Islamic State and to those who pledge their allegiance to them. After the fall of the physical Islamic state in Syria, their ideology lives on and continues to motivate its followers in mounting terrorist attacks.

The same goes for far-right extremism. The rise of rampant right-wing extremism cannot be underestimated. It feeds on the dehumanisation of migrants and hatred towards minorities in the Western world. Far-right groups operate either as factions, or through lone attacks. The ideology of Fascism is the central point they organise around and which unites them. Radical online forums have become the main source of communication for its adherents.

European intelligence services have increased monitoring of ultra-right wing groups which are considered to be capable of carrying out attacks similar to the New Zealand Mosque shootings. France, Britain, Germany and Italy have all been warned of the growing risk associated with far right extremism. Recently, French anti-terror agents arrested ten people over a suspected plot to target mosques, politicians and migrants as part of an investigation into far-right activists. The suspects are said to be associated with a terrorist group. One of the suspects had reportedly glorified the neo-Nazi Anders Behring Breivik, who killed 77 people in a terror attack in Norway in 2011. In Britain intelligence agencies have been cooperating with police to tackle the threat posed by far-right groups. The threat of the far-right is clawing its way back in Germany, particularly since 2015, when Chancellor Merkel welcomed nearly 1 million migrants and refugees. The head of government in the central German town of Kassel, Walter Lübcke was found dead in his garden. Detectives arrested a criminal with a history of neo-Nazi activism. He blamed his actions on his anger at Germany’s immigration policies.

According to a report from the American Anti-Defamation League’s Center on Extremism, all extremist-related killing in the US in 2018 had links to right-wing extremism. That includes a high school shooting in Parkland, Florida and a mass shooting at the Tree of Life synagogue in Pittsburgh, Pennsylvania. This shows the scale of far right extremism and the extent of radicalisation. Western governments should be concerned about the growing influence of online radicalisation and take concrete measures to tackle this threat head on. We have a responsibility to prevent vulnerable people from falling prey to fascist ideology.

Nonetheless, it is ironic that there is near unanimity on the left about the kind of motivations which are manifested in right wing extremism, whilst there remains a clash of opinions in terms of scrutinizing Islamist ideology and its relationship to terrorism. Progressive Muslims calling out Islamist ideology are disingenuously branded as ‘Islamophobes’ by Muslim fundamentalists and the liberal fringe. People like Irshad Manji, Shireen Qudosi, Asra Noumani, Usama Hassan, Zuhdi Jassar, Maajid Nawaz, Raheel Raza, Haris Rafeeq, Elham Manea and Qanta Ahmed and many more are calling out the ultra-conservative mores and traditions that have proved to fuel violent tendencies within Muslim communities, yet the term ‘Islamophobia’ has been thrown around to smear dissent as hateful.

Islam is often experienced as a personal relation between an individual and the creator or as a connection to Muslim culture and history. Islamism is quite distinct: it is a political manifestation of Islam which seeks to violently impose repressive shari’a laws on to wider society. Many on the left unwittingly or purposely choose to ignore this distinction. They shout down any criticism of Islam by hurling accusations of ‘islamophobia’ at progressive people. Sadly, not only fundamentalists but also lefties vigorously blur the border between Islam and Islamism. They both tend towards shutting down dissent and labelling it as traitorous, bigoted, racist, and Islamophobic. There is an urgent need for debate on ever-growing radicalisation within religious discourse. The problem cannot be solved unless it can be described. After many Islamist-inspired terrorist attacks in Muslim countries, and on Western soil, perpetrated explicitly in the name of religion, a liberal fringe still struggle to relate these horrific terror attacks to jihadi ideology.

The shunning of people who raise questions, including progressive Muslims, reformers and dissenters to prevent a set of beliefs is disingenuous. It generates an environment of impunity upon which Islamists thrive. This selective political correctness is derailing discussion about the extremist elements within religious discourse. It comes as no surprise that the lines between ideas and people become merged in order to protect ideas in totalitarian states.

People are free to scrutinize each other’s ideas in secular societies, within the limits of human dignity. Secular freedom is fundamental to the rule of law and the protection of minorities in particular. Western secular societies may have imperfections. No system is perfect. However, these imperfect secular societies have proven themselves to be far better than theocratic Muslim regimes in which human beings right to live a dignified life is infringed upon by religious fanatics and where dissidents are treated as pariahs.

Therefore, the fight against terrorism will never be over until its ideological imperatives are challenged wherever they are being perpetuated. This is key to countering both right-wing and Islamist ideology robustly – without any ifs or buts.