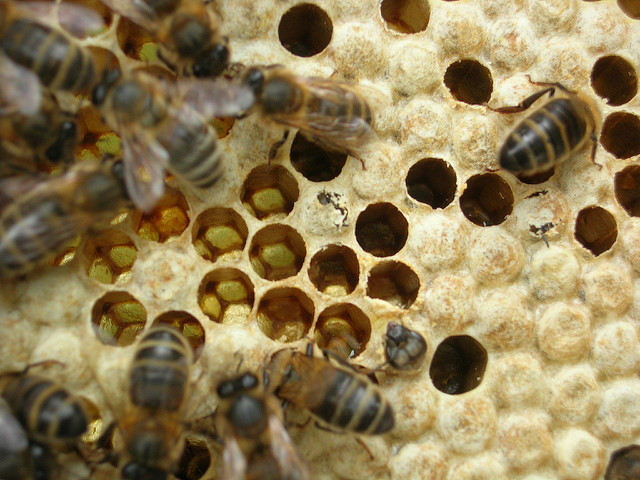 ‘Determination, persistence and good fortune had come together. We realised that what we strived for had become a reality. But when our dreams were shattered by the occupation we realized that we had to differentiate between two conflicting feelings: the ecstasy of success and the bitterness of death,’ said Itaf.

Itaf continued speaking about the pain that had hit her body and soul. She took a deep breath and returned to her memory of the time when her husband lost his legs as the result of a work injury. That incident led her to contact civil organisations and societies until one of them assisted her in establishing a small enterprise of two beehives in 2002.

Itaf tells her story with feelings mixed with beautiful and painful memories. ‘I was very happy when I founded this small enterprise, particularly because it was my only chance to have a decent source of living at the time. I worked hard to make the project a success. I had everything I wanted. After twelve years of effort the enterprise increased to 18 beehives. My business allowed me to pay the costs of my husband’s treatment, and cover the needs of my children and my household,’ she said. ‘I no longer need anyone’s help,’ she added in a dreamy tone.

‘At that time, everything was going well. In September 2013, I moved the beehive boxes to the border areas east of Al-Masdar village, placing them on the roof of my brother-in-law’s house. When the 2014 war on Gaza started, I began to feel concerned about my work… and my fears and worries came true. My brother-in-law’s house was destroyed. It was a disaster to me. I waited helplessly until the aggression ended.’

With eyes full of tears, she continued, ‘Once the aggression had ended, everyone went to check on their homes and relatives. I went to check on my bees, hoping that they had found shelter in a nearby place. I don’t know how I got there but I found some of the bees in a tree, and I wondered about the rest, wishing to find them all. My grief about my bees was like a mother’s for her children. People were weeping at the ruins of their homes or for lost children; I wept over my bees.’

Itaf said, ‘I am tired and I have a slipped disc in my lower back. I used to be able to carry the beehives’ frames with me as my source of income.’ She said that the occupying forces had confiscated them and deprived her of her source of income. ‘Hopefully God will compensate me for my loss.’ Itaf lost her source of income and thus her financial situation started to deteriorate. She could not pay for her husband’s medication nor meet the needs of her family.

From 2014 until time of writing she has not been compensated for her loss and cannot restart her project due to the high cost. She is still waiting for a new opportunity to start again. ‘All that we had built throughout our lives was lost in moments. The occupation transformed our hope into pain, and shattered our dreams.’

We hear little about the systematic destruction of small enterprises, which women struggled to build to make a living for their families and which allow them to live with dignity.

Kholoud Daher, is a 28-year old woman from Deer Al Balah, Gaza Strip, who has a B.A in Arabic Language and Media. Daher participated in several media training in media and documented various violations against women as well as addressing issues such as reproductive health and education. Her ambition is to become a famous activist in the field of human rights in general and women’s rights in particular.