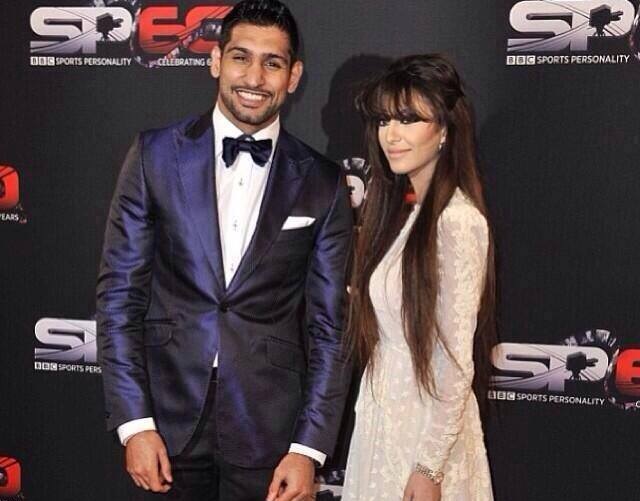 Faryal Makhdoom is a young model and activist, and wife of the two-time World Boxing Association Champion, Amir Khan. Recently, Faryal announced (via Snapchat) that she was breaking the silence surrounding the abuse she and her husband had suffered at the hands of Amir’s mother and sister. She told her followers that Amir is an amazing husband and son, and that he has done everything to support his family even in the face of the abuse. Faryal accused her mother-in-law of demanding that Amir file for divorce while Faryal was nine months pregnant with their first child. She states that Amir’s mother and sister physically assaulted Faryal when her husband was not home. This very public airing of family drama has caused an outpouring of support for Faryal on social media. Usually, she gets peppered with abuse from trolls.

There have been conjectures about family conflict in the Khan family for several years now. Faryal’s revelations are essentially confirmation of this gossip. Most of Amir’s family members are working with, or for him in some capacity, whilst others are just outright financially dependent. Amir Khan is the golden-egg laying goose. It is not a secret that his father takes care of his finances. A wife who wises him up about just how much sponging his family is doing has to be seen as an inconvenience. Faryal’s American-Muslim background contrasts with her in-laws’ British-Muslim background. British-Muslims with South Asian roots (like Amir’s family) tend to be less liberal than their American counterparts. The North of England, where Amir and Faryal live, is a particularly regressive diaspora of South Asians.

Faryal’s story encompasses all the negative stereotypes of South Asian families, including an abusive mother-in-law, violent sisters-in-law, and a jealous, underachieving brother-in-law. The sheer number of women and girls (and some men) empathizing with her and drawing similarities while disclosing their own woes is evidence that there is a real issue at hand.

Unfortunately, one of the problems is women themselves. I hate to acknowledge this, but it is women who break other women down. Maybe they unwittingly let their insecurities, jealousy and prejudices, affect them. However, it may well be as calculated and malicious as it often seems to be. The rivalry between mother-in-law and daughter-in-law has plagued a whole world’s worth of women. These two very different women are thrown together because of their connection to one man. Battle ensues for the attention, affection, and commitment of this one man. The matriarchal mother-in-law essentially feels she owns her son, and all that belongs to him. Any ‘encroachments’ (in the mother-in-law’s opinion) on her power will not be tolerated. If the daughter-in-law won’t conform to the demands of her in laws, she will either be emotionally destroyed, excluded, or worse, divorced. She feels she has bestowed her most valuable possession upon an undeserving girl who becomes her everlasting slave. You may think I am being overly dramatic, but my own grandmother didn’t mince her words when informing my mother of her ‘place.’ My own close-call with a mother-in-law is not too far away from my description. I believe this mentality stems from a time when girls were seen as commodities and burdens; less valuable – less human even – than men.

Another factor is ‘Eldest Son Syndrome.’ Amir Khan is the eldest son in his family. To those less familiar with the South Asian community, this translates into the expectation of parents for a lifelong commitment and unspoken pledge from their son. He is expected to be the flag-bearer of the family, often the financial provider, and, in some cases, a father figure. My father is the eldest son in his family, so I am all too familiar with what this role entails. The eldest son is often expected to forgo his responsibilities as a father and husband so as to maintain his status as a good son and brother. Emotionally manipulated, he has to obey the wishes of his family (mainly represented by his mother); he is threatened with curses, his mother not ‘forgiving him, her breast milk’ (a Pakistani concept), being cut off from the family and so forth.

There are conflicting opinions on Faryal’s disclosures. Some people claim she may well be exaggerating, or even lying. Another popular opinion and that of my own mother: ‘regardless of what’s happening within the family, Faryal shouldn’t have broken her silence and taken to social media the way she has.’ Within South Asian families, there is an expectation that men and especially women need to suffer in silence. Revealing injustices is considered shameful.

There are hundreds of messages of support under Faryal’s Instagram pictures, with numerous girls claiming to be in her exact position. They can now ask themselves why they should suffer in silence. Faryal shared a screenshot of her sister-in-law threatening to ‘destroy’ her if she didn’t stop sharing her truths on social media. If the accusations of abuse, violence, and threats of divorce are true, then why should Faryal stay quiet? It is high time we lift the lid on these taboos and disarm the fear of shame and disgrace. We need to realize that destroying a daughter-in-law is destroying the core of our society. We can’t expect broken women to produce strong men or women, so let’s stop this breaking and start building each other up.

I can’t say I have ever found Faryal inspirational. I would be lying if I said I suddenly find her so now. I do find her brave, however. Faryal has sparked a meaningful and overdue conversation about women oppressing women which previously has only taken place quietly, in whispers and in sobs, exclusively between women. Meanwhile the screaming and crying continues.

Public health researcher by trade, writer, activist for common sense and a lover of everything stylish.