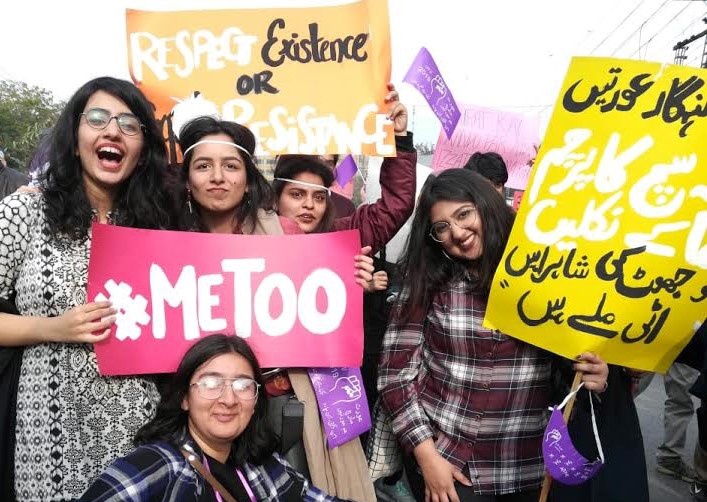 Photo taken at the Aurat March in Pakistan, 2019
Experiences

Why we marched in Pakistan

Pakistan has a rich history of women’s participation in the political and social spheres. The Pakistani movement for independence from British colonialism (1940-1947) saw women participating as actively as the men. The Aurat March was so necessary and long overdue.

This was our second year organising the March as Hum Aurtain. It’s been a rewarding, wonderful and humbling experience. Last year our focus was ‘Equality’. This year we focused on ‘Sisterhood and Solidarity’. Why? Because this is what our work has taught us. Many women, non-binary and trans activists came together – not only to call for economic, environmental, reproductive and restorative justice but also for inclusion and access to public spaces. We are all people with multiple identities, backgrounds, experiences and lives and while that brings diversity of ideas and actions, we are all united in our vision of the world we want to craft: a world without discrimination, violence, harassment, war, injustice and state brutality.

The demands we were raising were bound to disrupt the social and cultural status quo. It’s not surprising that there was a negative reaction in certain quarters. We could not have even imagined in our wildest dreams that it would be this devastating. Not to our cause, or to what Aurat March stands for, of course, but the general lack of understanding on display. There is a huge denial of the issues that affect women. The intense trolling and harassment that many faced for their participation, such as targeting placards shared on social media only highlights this further. Pakistan is still a country that is having a very difficult time grasping what feminism really and truly stands for and what equality means. For most, the word feminism is a label they don’t wish to be associated with. This unnerving ignorance is not just restricted to people who don’t have access to information. It is grossly mainstream, even within educated circles and amongst showbiz personalities. The backlash that disappointed me the most came from women: those educated, working women who were enjoying all the benefits that feminists before them had to fight tooth and nail to obtain. It also came from privileged women sitting in the West with their saviour complexes, disconnected from this part of the world and our local circumstances.

One of the most unfortunate aspects of the backlash was that it focused attention on just a few of the issues the March sought to raise in its manifesto. Important issues like the minimum wage, workplace harassment, violence against women, our anti-war stance and solidarity with the people of Kashmir and Balochistan were swept aside. This is a classic case of trying to undermine a movement fighting hard to push back and weaken the deeply ingrained patriarchy that inhabits our culture and traditions. Religion and culture are old tools that have been used to silence women for centuries. The backlash is not new: it’s predictable – and it has run its course.

Since we raised our voices against ‘honour’ killing, the right to divorce, and an end to forced and child marriages, men of more conservative backgrounds viewed this as a threat to their cultural norms and the entitlement that they feel over women’s bodies and sexuality. The right wing fanatics have openly incited hatred and rape threats against all those who had taken part in the Aurat March in their Friday sermons. They were unable to understand the slogans which were used in the protests such as ‘Khana garam ker doun gi, Bistar khud garam kero’ (I’ll warm your food, warm your own bed) – which referred to sexual exploitation and were hugely and widely misunderstood. The same went for a placard that read ‘Dick pics apne pass rakho’ – (Keep your dick pics to yourself) which caused more offence than the actual act of sending such unsolicited pictures. It is ironic that such keen offence was felt in a society where men freely use sexually derogatory language against women in public spaces and do not hesitate to use sentences laced with references to female genitalia well within the earshot of women or those nearby.

It’s been more than a week since the Aurat March which has stirred a heated conversation between people young and old. That in itself is an achievement, and one which we hoped for. We decided not to react to the charges against us but to remain proactive during these slightly trying times. Our #IAmAMarcher campaign, which trended on twitter, was very engaging and empowering. Many people expressed their concerns and their experiences, explaining why they were marching.

The online harassment and abuse that followed was perhaps the most alarming aspect of the backlash. Complaints have been filed against those who made online spaces unsafe for women. We marched to make public and online spaces safe for women, as well as queer, trans and gender non-conforming people. It’s important for us to set a precedent.

As with everything, we need to look at the bigger picture. The backlash worked in increasing our solidarity. Our aim was to bring together as many women and people with minority gender identities as possible across the classes, ethnicities, abilities, neighbourhoods and ages in order to build a sisterhood. To create a safe space for women where they are not policed or asked to tone down their anger. More than anything, it was a celebration. One we needed. One we all deserved.

I am an artist by profession, an activist by trade and a feminist by choice.