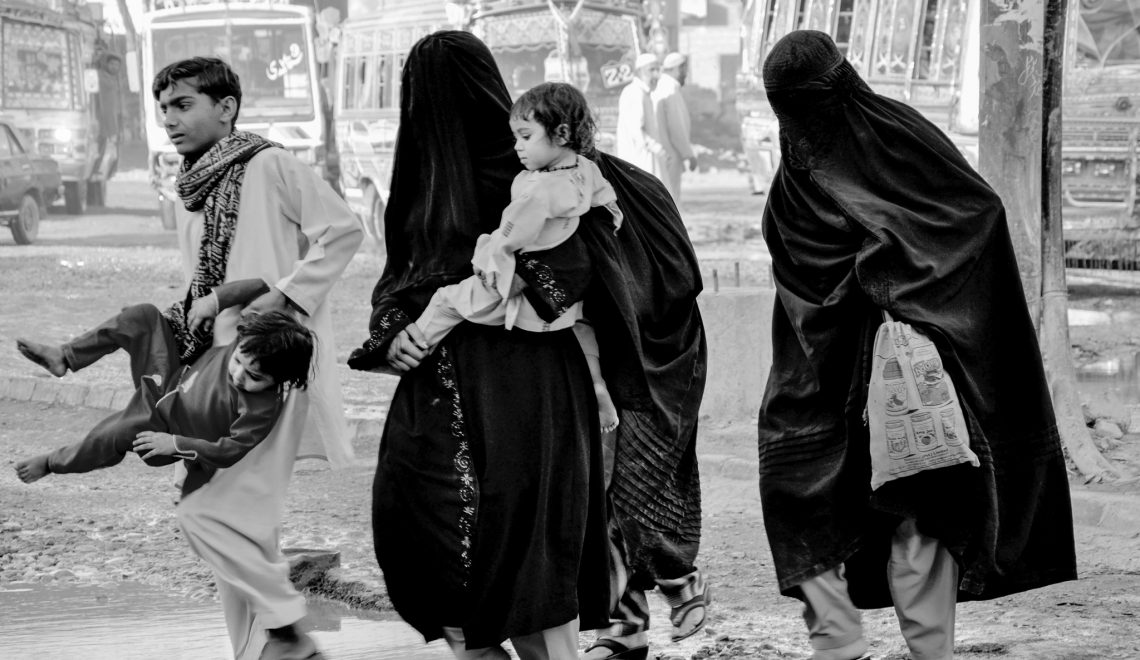 Purdah means to seclude oneself from others, to wear enveloping clothing, to veil; it also means curtains. Burqa, niqab and hijab are all forms of the practice of Purdah.

My interest in Purdah was activated after a powerful visual encounter while documenting daily life scenes in Pakistan for an ongoing series of photographic investigations. A family was crossing an unpaved, dirt road, on the outskirts of Karachi. The women of the family were veiled from head to toe. The only elements visible were the rhinestone embroidered high heels grasping their feet, along with similarly embroidered burqas on their bodies. This photograph prompted a deeper need to investigate the world of cultural and religious veiling practices, even though veiling has been practiced by women around me my entire life. I myself often veil with the dupatta when in Muslim majority countries like Pakistan.

While there are no photographic records, I learnt from my mother that both my maternal great-grandmother, Karmi Shahn, and maternal grandmother, Sarfraz Begum wore burqas. Karmi Shahn’s choice to veil did not appear to make her weak or submissive to males. Stories are told about how she ruled over her large estate from a raised wooden pedestal in the centre of the residence. From this throne she smoked hookah on a nightly basis, slept and offered her prayers, while managing servants and her family’s day-to-day affairs. No one in her family could get married or travel outside the vicinity of the estate without her permission.

My maternal grandfather was a soldier in the British army who, because of his close ties to German and British settlers in Lahore, appreciated a Western lifestyle. However, he was not able to stop Sarfraz Begum from wearing a veil. He did not appreciate her orthodox cultural and religious practices, such as veiling. He forced her to take the back seat when they drove through the streets of Lahore in his car in the 1950s, so as to not be directly associated with a woman in Purdah.

My mother faced resistance from my father when she began to dress more conservatively and shrouded her body and hair with veils. My sister, Fatima, has a reactive, on and off relationship with the veil. The predicament of living in a society where a woman is forced to veil, for example, in Afghanistan, is not so different from a woman being forced to remove her burqini, as we saw on a French beach in 2016.

Against the backdrop of this complex global and political discourse, and political posturing over practices like Purdah, I believe artists, as reflective thinkers, through questioning and material research, can bring nuance and criticality to this discourse.

I agree with Nina Simone’s definition of an artist’s responsibility when she says:

An artist’s duty, as far as I’m concerned, is to reflect the times. I think that is true of painters, sculptors, poets, musicians. As far as I’m concerned, it’s their choice, but I choose to reflect the times and situations in which I find myself. That, to me, is my duty. And at this crucial time in our lives, when everything is so desperate, when everyday is a matter of survival, I don’t think you can help but be involved. Young people, black and white, know this. That’s why they’re so involved in politics. We will shape and mould this country or it will not be moulded and shaped at all anymore. So I don’t think you have a choice. How can you be an artist and not reflect the times? That to me is the definition of an artist.