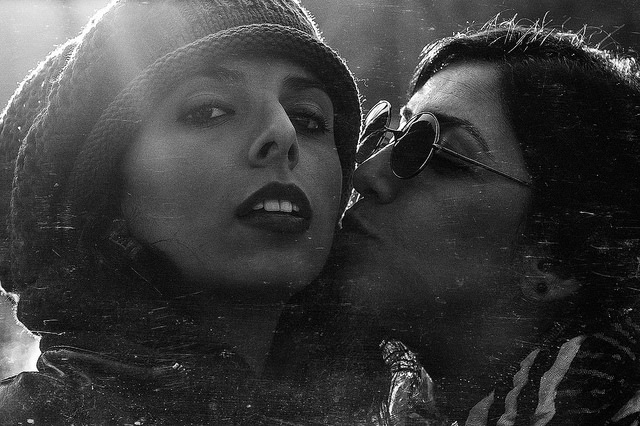 In a closet of dreams

Zehra rolled onto her side, looking at Kiran as if she was a secret worth her weight in gold. Zehra always looked at Kiran like she was treasure, but only when nobody else was watching. Kiran had enjoyed the excitement at first; the thrill hadn’t felt like a bad thing, but now it had grown tiresome – she wanted to be shown off, she wanted the person that she loved to be proud to have her as a partner. She wanted normality, a companionship that didn’t need to be a sordid secret. She was sick of pretending to be single.

Kiran’s bed was their haven, their happy place. The bedroom was softly lit with candles that left the smell of vanilla orchids and fresh laundry lingering in the air. The light of her salt lamp bounced off the cream and gold walls. It made the room glow as if the sun was performing miracles, peering in on them as the clock approached midnight. Kiran rolled on her side to face Zehra, smiling as she wrapped them both tighter in turquoise blankets that felt softer just for her being there. Everything felt softer. The world felt kinder.

They’d just watched an episode of Black Mirror on Netflix – the one called ‘Hang The DJ’. It’s about a dating app that creates a simulated version of you, and if you are brave enough to defy ‘The System’ – which tells you who to date – and run away with a person you really like enough times instead, you’ll be paired as a match in real life.

‘Would you run away with me?’ Zehra smiled as the episode ended, brushing her index finger across Kiran’s cheek. ‘Of course I would,’ sighed Kiran. ‘But I know you wouldn’t run away with me. You’d tell me to “wake up and smell the coffee.” You’d say it “wouldn’t be right” for us to do it.’

Kiran knew it was true. Zehra conformed to who society told her to be, even if she couldn’t admit it.

‘No I wouldn’t!’ Zehra exclaimed. ‘You know me babe, I don’t like being controlled.’

Kiran turned her face towards the back of the room to take a moment to smile in frustration at her delusion. Zehra’s roots in religion had blossomed into a tree of devout self-loathing and guilt. She’d had a strict upbringing in a Muslim household where make-up wasn’t acceptable, let alone boyfriends… let alone girlfriends.  Zehra wasn’t raised to believe in things like same-sex relationships; she thought they were as simple as a sin. She didn’t see their love as beautiful – she saw it as an addiction that she couldn’t give up.

Kiran was the opposite. Raised in a liberal – albeit still Pakistani – home, she had been willing to do whatever it took to make it work when, in her early twenties, she had fallen in love with Zehra. They’d known each other a long time; they’d been the best of friends. Now they’d fallen in love. It just happened one day. They often made jokes that Cupid had come along and struck them down for fun, because neither of them was sure where the attraction sprung from.

So they had had a whirlwind romance – meeting for intimate dates, going back to Kiran’s for coffee that turned into love-making that felt like a spiritual awakening every single time. They’d stay on the phone for hours every night. Home wasn’t a place anymore; they’d finally found it in each other.

Before they knew it, five years had passed and they’d still not told a soul. Their passion for one another hadn’t simmered down; not a touch. Zehra had hoped that they’d get bored, that it was a phase, that it would wear off. She hadn’t allowed herself to believe what she’d found was real – it had to be a test from God.

Kiran had always believed in an all-merciful Lord, but that belief was getting harder to hold onto as time moved on, as she stayed in limbo with Zehra. What God would keep them apart, when war was permissible, when all sorts were tolerable? Why was love with someone of the same sex such a big deal? It made no logical sense to her no matter how much she thought about it. And so resentment grew in the pit of her stomach. Resentment at religion; resentment at Zehra for letting her convictions about a Man in the Sky affect their happiness.

Kiran pursed her lips, took a long breath and turned back to Zehra. ‘I know babe, no one can tell you nothing!’ She laughed, but with no heart in it.

Kiran had given up trying to have ‘the conversation’ with Zehra. Every time she did Zehra would flip, say they shouldn’t be together anyway, that it was wrong – she’d storm out and go cold on Kiran for days. Those days were the worst. Kiran wouldn’t eat, or she’d eat too much, or she wouldn’t sleep, she couldn’t smile, she’d cut her hair. She couldn’t live without her anymore, and she didn’t even want to try.

She knew Zehra would have to leave soon, she always did – she couldn’t stay the night, she had things to do tomorrow. They still lived two separate lives. Like friends. With benefits. In love. It felt tragic. It felt amazing. They were both so full of longing, all the time. And time was of the essence.

So Kiran braided her hair back, unwrapped the dupatta draped around her and took her t-shirt off. Then her bra, and her trousers. She asked Zehra to do the same. Within seconds their limbs were entwined under the sheets and the lights from the candles danced along with them as The Lovers performed a dance of their own.

They both took a deep sigh of satisfaction at the same time, looked into each other eyes and laughed because they both knew – this wasn’t forever, but at least for this moment, they were home.