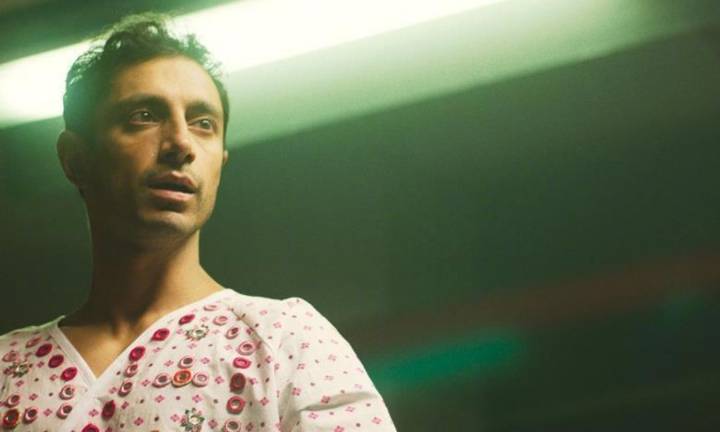 Riz Ahmed’s latest offering feels very apt for 2020, since its central theme dances around the fear intrinsic to the reality of our lives. Riz plays Zed, a British Pakistani rapper in New York. On the cusp of ‘making it’, he’s getting ready to embark on a US tour. But first, he decides to go home to London to check in with his family.

The film opens with Zed rapping venomously, spitting into the mic until his face contorts and he falls to the stage floor, every word coming from his gut. He climbs onto some stage apparatus,his energy palpable through the screen. This makes watching the decline of his physical health even more painful. Zed starts his story as if he is an immortal and we watch his mortality and in turn, his ego, breakdown as the movie progresses. The first moment of the movie where your heart drops, is when Zed, alone in the bathroom, punches his leg in an attempt to feel it. We all know what a dead leg feels like, but the scene evokes dread. It turns out that Zed has an autoimmune disease.

This movie was made for us. When I say us, I mean British Pakistanis, specifically. The references were delicious. I lapped up every single one. They say representation is important, and of course I know that it is – but that is really underlined when you actually get that representation, when you see conversations that you’ve had, smoking in the rain in a bus stop in south London, re-enacted on the big screen at the London Film Festival. When you’re the only one laughing in a (small, socially distanced) sea of white film critics who don’t get it, and who will never get it, well, it’s nice to be the one on the inside, for once.

There’s a moment where Zed goes to the mosque and when he comes out, he walks to the back alley and lights up a spliff (Riz’s lyric ‘I blaze hard after mosque’ comes to mind). A ‘fan’ sees him and Zed offers some of the joint (ah, pre-coronavirus times) and the fan chastises him for passing him the smoke with his left hand. “You should pass things with your right hand, brother,” says the fan. ‘But this [the spliff] is haram!’ Zed replies in disbelief. I laughed along with him as the fan insisted it was makruh. A deeper moment can be found in the mosque moment, where Ahmed explores the human nature of living as both sinner and saint.

When Zed goes to the mosque with his family to pray, you feel the intensity of his visit – that feeling of coming to a house of God after having not visited Him in a long time. The feelings of guilt and self-discovery hit me like a train; I could see it on his face – the way I have felt it in my gut whenever I visited the mosque for the first time after several years.

The film is set around the time of Ramadan, and the issue of identity as a child of diaspora comes up as Zed sits with his family to break their fast (Zed himself is not fasting). Zed’s birth name is Zaheer, and a family member (who was I was excited to see being played by the poet Hussain Manawer!) berates him for shortening his name to make it easier for white people to pronounce. He says that abbreviating our names is an insult to those who named us. Zaheer insists that ‘Zed’ is an identity he carved for himself, but even he doesn’t even look like he believes that. My name is Maryam but I’ve been called Maz since I was ten years old. In that moment, I couldn’t help but wonder who had given me my alternative identity. Had it really been me, or had it purely been an attempt to assimilate into a society that would never accept me anyway?

A week before I watched Mogul Mowgli, my partner happened to give me a book called The Greatest Urdu Stories Ever Told. The book featured a short story called ‘Toba Tek Singh’, written by Saadat Hasan Manto. The story centred on patients in a mental institution in Lahore. Where was the town Toba Tek Singh now? Was it in Pakistan, or India? This question was enough to inspire a spiral of madness amongst the patients. The short story remains a powerful representation of the feeling of displacement that we’ve inhabited ever since Partition. Our parents came to England and gave birth to us and yet the trauma of Partition stayed in our blood – you know, the deep sense that something is not quite right. Where is home? Anyway, receiving that book felt like a cosmic coincidence, because the story of ‘Toba Tek Singh’ played a fundamental part in Mogul Mowgli.

When Zed returned to his family home in London it filled me with a sense of familiarity I’d never felt before in the cinema – old stickers of Pakistan tacked to furniture, Natco products in the kitchen, his mother burning chillies over the stove as a Nazar (evil eye) detector. Watching Zed rummage through his father’s cassettes reminded me of when I used to rummage through my father’s Nusrat Fateh Ali Khan tapes.

Zed had a nostalgic moment when he found a jungle set on an Urdu cassette he’d recorded over called ‘songs about Partition.’ The man on the cassette cover had masked his face with hanging flowers, electric yellow and orange. This image, a man dressed in flowers haunts Zed throughout the movie as a symbol of partition and generational trauma. A man who was driven mad with a simple question: where was Toba Tek Singh post-Partition? Where was home now? We see through flashbacks that Zed’s father endured the horrors of Partition first hand, travelling from India to Pakistan on a train.

Once Zed is diagnosed , hallucinations begin. The man with flowers for a face follows him. The tremors Zed’s father relives from his train journey from India to Pakistan tremble through his son as he lays in the hospital bed. Generational trauma remains a consistent theme. Thoughts become things. A particularly painful moment came in a dream state as we see Zed’s father put on a suit and tie, then a retail t-shirt, then a restaurant apron, then, as he tries to put on overalls, he collapses. Our parents tried all types of occupations, worked themselves into the ground to try and find their place on this little grey island. Watching Zed’s father on the floor wrapped in layers of attempted occupational uniforms broke me a little. It was a reminder that we’ll never grasp the gravity of how hard our parents worked for us to be able to pursue our dreams – in Zed’s case, a rap career.

The detail in Mogul Mowgli was just beautiful. My favourite example may have been Zed’s hospital gown, which throughout the film became increasingly adorned with south Asian detailing – those tiny little embroidered circles with mirrors inside that are sewn onto south Asian outfits – I don’t even know what they are called! But seeing them made me feel closer to home… wherever that is. And that’s the point, isn’t it? Mogul Mowgli serves as a sharp reminder that the idea of home is complex. One line that sticks out for me in one of Riz’s songs (which features in the film) is ‘kidnapped by empire and diaspora fostered us.’ I rewound that part of the song back so many times I lost count.

Speaking of notable quotes, the way Ahmed portrays somebody who is trying to make a success out of their creativity will resonate with those in the sector, especially in a time where the government is telling us to retrain, as if the arts aren’t integral for the human spirit to survive. There’s a scene where Zed is in bed with his girlfriend when he starts rapping. ‘Legacies outlive love,’ he mutters into her ear. I’ve thought that myself more than once. Whilst it isn’t really true, it feels like the safest option. In a world of people who have the capability to tear you apart once you allow yourself to be vulnerable enough to put your heart in their hands, sometimes just giving your all to your legacy seems the best option. People can leave you – your legacy won’t. But your legacy won’t look after you when your body fails you. What’s a legacy worth without love?

The common – and tragic – reaction to a movie like this is that it becomes a sub-genre, niche, for a small audience. The beauty of Mogul Mowgli, and every movie that has been made with a protagonist who is a person of colour, is that whilst it is unapologetically for us, it doesn’t mean it doesn’t carry a universal theme that resonates in the pits of all of our stomachs. After all, the human experience remains the same, no matter where you are from. And that’s just the point of the film. I just hope it gets the appreciation it deserves.