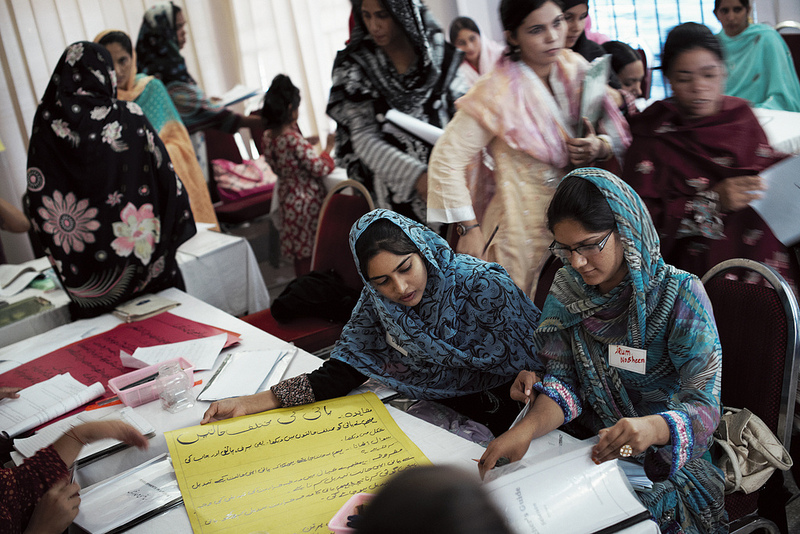 Sheroes of the Subcontinent

I was born to a family of feminists in the subcontinent where a culture of women’s subordination persists, including female infanticide. Women are left behind in all development indicators: in Pakistan the literacy rate is 55%, which includes those who can only read and write their own names. Pakistan is projected to achieve universal secondary education by 2095. Poor rural males have a 64% literacy rate, compared to 14% for their female counterparts. In Sindh, where I come from, 42% of women are literate, compared to 69% of men. Legally, women are discriminated against. Socially, they continue to suffer.

Within this cultural context, the existence of sheroes and men who champion women in my life are all the more valuable. My maternal grandmother enrolled at the University of Sydney in the 1950s, and later returned to East Pakistan to marry my grandfather. Together, they ensured that their children received a world-class education. They supported them in their careers, and never complained. This required many personal sacrifices: as East and West Pakistan waged a gruesome war in 1971, my mother and aunt were sent to boarding school in Murree. After the war was over, they had to migrate from East Pakistan (now Bangladesh) to West Pakistan. In Karachi they rebuilt their lives and sent their children for higher education to the US and the UK despite financial difficulties. To me, my maternal grandparents embody strength and dignity in war and peace.

My paternal grandmother was a teacher in Sindh, and also a staunch believer in education for girls. Despite tough financial conditions she too strived for her five children to achieve the best education they could. Today, my paternal aunts include two doctors and an academic. They are all financially independent, argumentative, loud, funny, intelligent, brutally honest, and beautiful. There are many such stories of brave women all over the country who defy norms in order to attain an education.

As a child, I spent burning summers and tender winters in our family home in Sukkur. My aunt runs a gynaecological clinic in our house. Here, I was privy to countless stories of domestic violence, honour crimes, violence against women, psychological abuse, loss, hurt, heartbreak and tragedy. As a criminologist, these stories formed my fundamental understandings of violence dynamics. Our culture undeniably privileges men, and these aspects of our ‘culture’ make me sick to my stomach. As Chimamanda Ngozi Adichie said, ‘If it is true that the full humanity of women is not our culture, then we can and must make it our culture’. My aunt’s clinic provides an extemporised safe space for women from all walks of life to vent, to express, to dissect the injustice, to collectivise, to strategise, to breathe, and to be free – if just for a moment.

Many traits of my adult identity were formed in Sukkur. In a society where women are encouraged to hide their bodies and personalities, my female cousins and I spent Ramzan in a relatively poor neighbourhood in Sukkur, playing night cricket with our male cousins and friends on the street. The older I grew, the more I realized how revolutionary these acts of equality were. Girls in my community were stopped from going to school[1], married before their second menstruation, and bought and sold. In a society that heavily emphasizes cooking skills as a woman’s role, I was never taught to cook. This was simply part of an upbringing that largely rejected social impositions: cooking did not have to be the sole basis for our identity. Instead we were encouraged to view our identity as breadwinners, earners, role models, leaders, and visionaries. I remember visiting friends in our neighbourhood where I was told women weren’t allowed to laugh in their house. I came home befuddled. Suddenly, the loud laughter in our own house was all the more valuable and precious. I remember when the madrassah next door told me and my other female cousin to stay in the house because it was immoral for us to be outside ‘uncovered’ and ‘exposed’. We laughed. We were taught to break these barriers and transcend these artificial gender binaries, to disturb the status quo and to be subversive.

This is not to say that there aren’t dissenters amongst our family, or that there is no divergence of opinions. I frequently find views around me to be misogynist, oppressive and patriarchal. Our beliefs are complicated and often contradictory, and our feminism comes in different forms. We disagree on trivialities and fundamentals. We have all faced resistance to our ideas, and much of it has been, and continues to be, difficult. But through it all has been the constant belief that we are equal. In a world where the gender gap remains criminally wide, being a woman can be tiring. Quoting Chimamanda Ngozi Adichie again, I note that, ‘gender as it functions today is a grave injustice’. I realise this increasingly as I live in diverse countries which are tied together by an underlying inequality when it comes to gender in its familiar forms and various iterations. Discrimination and gender stereotyping exists everywhere, from the legal profession in Pakistan, to academia in the UK, and to Japan’s popular narratives. The patriarchy remains alive, but I hope it is shaking.

[1] Pakistan has 25 million children out of school, with a disproportionate number being girls

Menaal Munshey is a PhD candidate in Criminology at the University of Cambridge. She is also a research assistant at the Violence Research Centre, facilitator of Learning Together at HMP Grendon, and senior research coordinator at the Legal Aid Office in Karachi. Previously, she was a researcher with the United Nations University Centre for Policy Research in Tokyo where she conducted research on terrorism, organised crime, and peacekeeping. She previously read law at the University of Warwick, with an Erasmus year at Eötvös Loránd University, Budapest. She has been the recipient of the Sir Albion Richardson scholarship at Gray’s Inn and was called to the Bar in 2014.