In this interview we talk to Abda Khan about her upcoming book ‘Razia’. Abda is a lawyer by profession. We were keen to find out how the book, which features a British Asian lawyer as protagonist, explores the themes of honour-based and domestic violence, and slavery. Her interviews highlight the importance of bringing awareness to issues faced by immigrant and minority women, which are often misunderstood.

1. Could you tell us a bit about yourself and your work?

I am a lawyer by profession. I run my own law firm in the United Kingdom, and have worked in the legal industry for over 25 years.

A few years ago, I noticed a lack of contemporary fiction depicting the people and issues I have come across through my career, particularly relating to British South Asian and Muslim women. I decided to start writing fiction. My first novel, Stained, deals with the taboo subjects of rape and ‘honour’, and my upcoming novel is, amongst other things, about modern day slavery, and bonded slavery. I also write short stories. All my work relates to the challenges faced by women of South Asian and Muslim heritage, such as honour violence, the effects of living in patriarchal societies, gender inequality, and cultural conflicts.

2. What is your new novel about and what is your inspiration behind it?

My new novel is called ‘Razia’. It is the story of a British Asian lawyer who becomes embroiled in the life of a domestic slave in London, whose plight leads her all the way to Pakistan, and into the shady world of bonded slavery and corruption. It also examines honour-based and domestic violence, gender inequality, cultural pressures and identity, all told through a gripping and inspirational tale. At its heart, it is also an endearing love story.

I came across the issue of modern day slavery in a news report a few years ago. I started to read more about it, and was shocked by what I discovered. I researched it further, and decided I would like to write about it to try and highlight the problem. There is little or no contemporary fiction that touches on the plight of modern-day slaves.

3. Why is it important for you to explore through storytelling the themes of domestic violence and honour-based violence, particularly among immigrant communities? 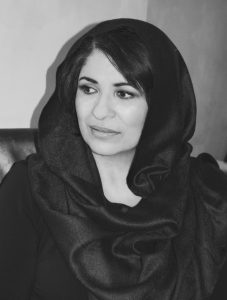 I think fiction is one of the many artistic forms available to us to draw attention to matters we feel strongly about. I think the issues I choose to write about are largely missing from contemporary fiction, or at least in Britain I feel that that is the case. Through my work as a lawyer, and in my charity work, I have come across women who have had to deal with complex family, religious and cultural problems, often because of so called family ‘honour’, but these women are rarely reflected in the fiction we read, as though they don’t exist. But they do exist. And the same can be said for modern-day slaves. They are absent from fiction, but they exist all around us.

4. What has been the response to your writing (from within and outside the Muslim community)?

On the whole I have had a positive response. Booklist in the USA has called my previous book Stained the ‘Contemporary Tess of the d’Urbervilles’. I think many people are glad that I have been brave enough (as they see it) to tackle something as taboo as rape in the book, because it has allowed discussion to take place where it would not have otherwise.

I have spoken about Stained, and the matters it delves into, at many events, and I have been challenged by a few Muslim men as to whether the problems are as severe as I convey. But this is also positive, as it allows me to give them accurate information, and persuade them as to the reality of what women are suffering, mostly in silence.

Many women have contacted me, both Muslims and non-Muslims. They have shared their stories, and some have even gone to the police to report rapes that they had previously kept quiet about.

5. What are your plans for publishing your novel Razia?

My previous novel Stained was declined for publication in the UK, as although literary agents told me they liked the writing, they did not think they would be able to ‘place it’. In other words, it was not ‘mainstream’ enough. However, it was published in the USA, and is available worldwide on Amazon, and it has received great critical acclaim. Also, as a direct result of the novel and the issues it highlights, I am a finalist in the Nat West Asian Women of Achievement Awards 2017 in the Arts & Culture category.

With my new novel, Razia, I have decided to crowdfund the book with the award-winning publisher, Unbound. It’s all about putting power back into the hands of readers; it’s up them to decide if Razia deserves to be published. By pledging, you can pre-order an online copy, or a beautiful printed book (much nicer than the version that will be available in the shops), which you’ll receive a lot sooner than it hits the high street, too. There are a number of other unique rewards you can also pledge for.

6. How can those interested support you and get in touch with you?

I would be grateful if readers could consider doing the following to help make Razia a reality:

To learn more about Abda Khan;