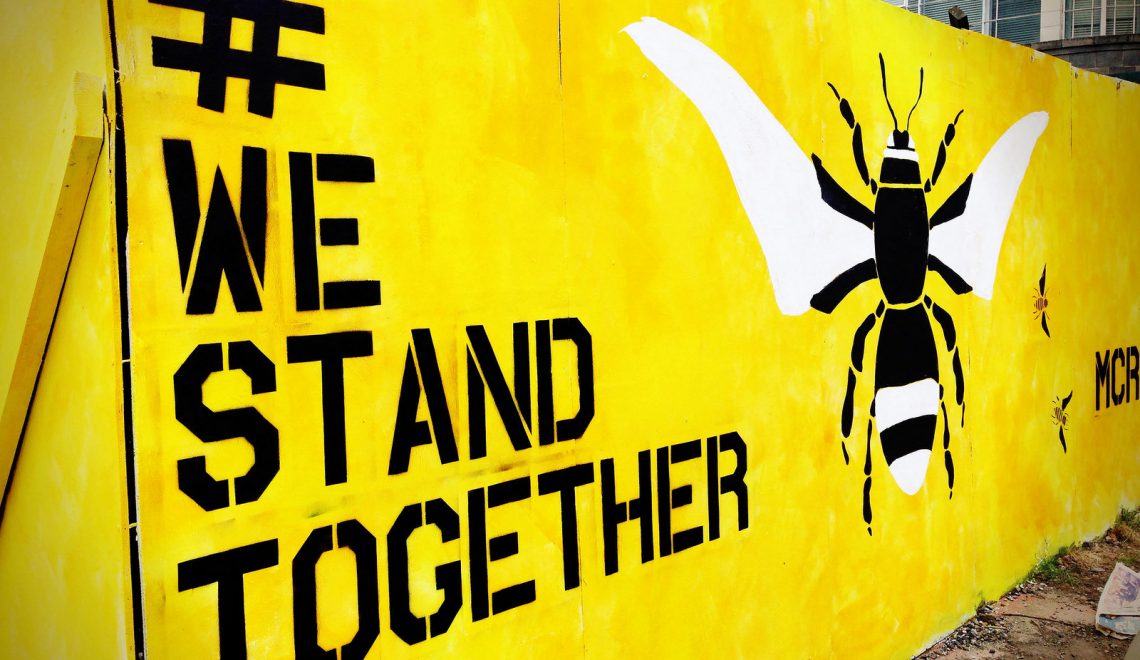 From Manchester, with love

I’m sure most of you have heard about the horrific terrorist attack in Manchester city centre on Monday night. A suicide bomber targeted fans leaving an Ariana Grande concert at the MEN Arena with a nail bomb. So far, there have been 22 fatalities and around 50 people injured. The most disturbing thing about this though, is that most of the concert goers were children.

I don’t tend to disclose my current or past locations,but it feels appropriate today. You see, I went to school in Manchester, the same school as the Pankhursts. I did my bachelor’s and post-grad degrees there. Until last year, my husband and I lived in the heart of the city centre. Manchester is where my mind and my heart were shaped. And, today, that heart is so heavy. I cannot believe what has happened.

Our first terrorist attack was in 1996, when the IRA blew our city centre to smithereens. My entire childhood was set against the reconstruction of our city, and the tireless effort to rebuild in the hope of something better, safer, and more beautiful than the destruction that sought to divide us. And here we are again. We have taken a hit this week, a jarring, horrifying hit. I cannot imagine how the victims’ families must be feeling, or what anyone who was there when the bomb went off is going through. They are in my thoughts and my prayers, and probably always will be.

But, amidst all this horror, there has been a glimmer of something, the prevailing notion that, even in the darkest of times, a spoke of light can still get through. I am so proud of our community and the acts of compassion and kindness we’ve been seeing all over the city since this attack.

Mancunians have been opening up their homes to anyone involved who needed a place to rest, eat or stay for the night; cab drivers have been offering free rides to and from the arena for victims and worried parents. Our police and emergency services have been working tirelessly – and so efficiently – to treat the injured, and get to the bottom of this. Our Mayor and religious leaders have urged people to remain tolerant and to stand together during this bitterly divisive time (despite arseholes on Twitter trying to incite us to do exactly the opposite to serve their own political agendas).

The thousands of people who came to the vigil last night and the hundreds who’ve been donating so much blood, that our blood banks are now full, are a testament to this great city and what it truly means when we talk about Mancunian spirit.

Proud of the people from all faiths who stood side by side in Albert Square Vigil tonight. Hate can’t divide us 🙏🙏🙏#silenceformanchester pic.twitter.com/3bUj50qb53

Imams and Muslim youth from around the UK drove to Manchester to pay tribute to the victims of Monday’s attack https://t.co/dAxBLd0Hs8 pic.twitter.com/caw57sNFUX

The thing is, it doesn’t matter if the perpetrators were Irish Catholic terrorists from the IRA, British Libyan Muslim terrorists acting on behalf of ISIS, or French All Hail The Banana King terrorists from Napoleon’s Bunghole. What matters, is that they are hateful, radicalised nobheads. In my experience, these particular animals are one and the same. This mentality does not have a face. Nor does it have a religion. Trust me, we’ve been here before. What we are dealing with here is pure hate. It’s a perversion of reason and rational thought. And when that level of hate and anger attaches itself to a political ideology, or system of belief, it metastasises and nothing can satisfy it. Our only response to this twisted and vitriolic aggression, is to rally as a community. Now is the time to stand together and support one another and keep showing compassion and kindness, because that’s what we Britons do best; when shit gets real, we’ll make a nice cup of tea and crack on.

This was a horrible, disgusting act that we shall grieve for many years to come, I’m sure. But we will overcome: we’ve done it before and we’ll do it again. Please don’t give in to the very thing we’re fighting. Humanity is the only card we have left to play right now.

I hope you and yours are safe.

British Pakistani Muslim writer that goes by the moniker, Nadia Hadid. Through her blog, mylifeasanimposter.com, Nadia examines cultural and religious identity, love, feminism, politics and interfaith marriage. She has been invited to speak about these issues on BBC Woman’s Hour, City Radio, and Lena Dunham’s award winning podcast, Women of the Hour. She has also written a series for eHarmony UK called, The Modern Muslim Guide to Dating. Nadia is passionate about the empowerment of South Asian and Muslim women. She believes we need open dialogue and a visible voice in order to lead the conversation on our own lives. There are so many iterations of the female Muslim experience and there is room enough for every story to be told.