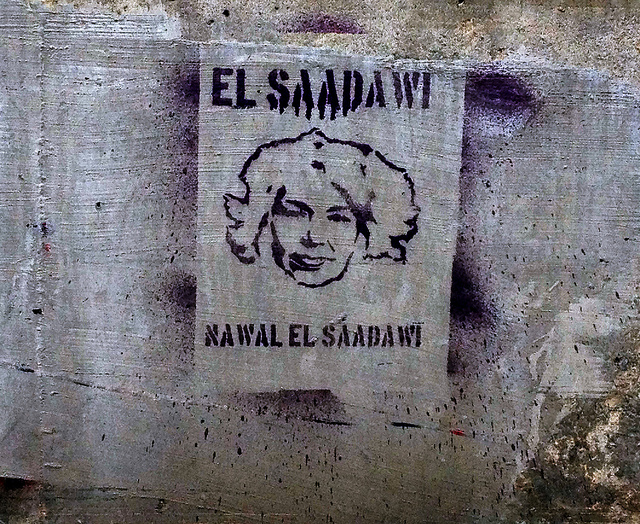 I am now 87 years old. I have never understood regret. People ask me: ‘What are your regrets in life? I never know how to answer. I ask them, ‘What should I regret?’ Should I regret being born in an oppressed colonized African country: the British colony of Egypt, ruled locally by a corrupt King and his obedient feudal minority elite? Should I regret that I was not born in London, the capital of the British Empire, built with all the riches robbed from our countries?

How could I regret any aspect of my life?

At the age of seven I went to the English school in the village. The headmistress was a racist white woman. She hated my brown skin, my Egyptian accent, and my rural, poor origin. She discriminated against me, and all the other girls like me. She only smiled upon, and gave good marks to the girls from the upper class. Her favourite was the mayor‘s daughter.

I was proud of my father. He did not collaborate with the feudal lords and King Farouk to rob the hard-working peasants of their cotton. My father was educated: teaching students the Arabic language, poetry and literature. His peasant mother had taught him pride. She was a revolutionary woman, who led the villagers to rebel against the injustices of the British colonizers and local authorities. My mother had been educated too. She rebelled against her oppressive, military father. She taught me dignity and self-confidence. I inherited her intellectual ambition.

I never had any regrets over being born in this family, who supported me, forgave my mistakes and who planted the seeds of creativity and dissidence in me. How could I regret being born in such an environment?

Becoming a medical doctor was never my own ambition. I attended medical college to please my parents and realize their dream but I never had any regrets over studying surgery and medicine or for working as a physician. My experiences of treating sick women and men, and my scientific studies in different branches of medicine opened my mind to the connections between the individual and society, between medicine and literature, between religion and politics and between men and women. Without these experiences I could not have understood the problems of gender, class, race and colonialism. I could not have written my books.

Most of my medical colleagues gained a lot of money. I did not. But I do not regret that. I see them worried and miserable despite their riches and status. They did not face persecution from the government as I did. But I feel healthier and happier than them even at 87 years of age. Medical education is based on a separation between medicine and politics. Most medical doctors do not think about the original causes of disease, which are concealed in the political, economic, social and religious systems ruling the country. I educated myself through personal experience and through reading outside my profession.

Knowledge is irreversible. I could not stop thinking about how poverty and oppression are the original causes of many diseases, and that to eradicate them we would need to liberate our country from colonialism and corruption. In fact, I was lucky to live with different types of oppression and to have challenged the ruling system. Even prison and exile were positive experiences in my life. I wrote my best books whilst in prison and in exile. Death threats only pushed me to work harder, to respect my time, and to know the value of each minute of my life.

How could I regret death threats and all the other hardships in my life? When you are able to turn negative situations into positive experiences you do not know regret.

I never dreamt of being a wife or a mother. I saw most women around me regretting marriage and carrying the burdens of serving their husbands and children. But I had the full experience of motherhood, of two children, three marriages, and three divorces, without any regrets.

In spite of different types of pain, they were still rich experiences in my life. I never felt regret. I felt the opposite: I was grateful to my daughter Mona and my son Atef for giving me deep satisfaction, pleasure, and happiness. I saw them growing in front of me; and away from me too, while I was in exile. They paid a high price for being the children of a political dissident. The patriarchal oppressive system punishes children to double the punishment of their mothers. Both my children were strong and overcame hardships, just as their  mother did. Mona is a creative writer and a poet. Atef is a talented film director. Both of them have faced obstacles and continue to do so. I feel proud when I see them fighting to get their work done. Sometimes, when they are obstructed from expressing their creativity it causes me deep pain, but not regret. Pain can be positive and constructive. It gives you more insight and energy to continue your struggle and to resist. But regret is negative, and may drain your energy, and lead you into depression and despair.

I am optimistic by nature. I inherited the energetic genes of my powerful peasant grandmother, so I never lose hope. Hope is power. Maybe this is the main reason why I have no regrets in my whole life, in spite of all the great pains and hardships I have endured.