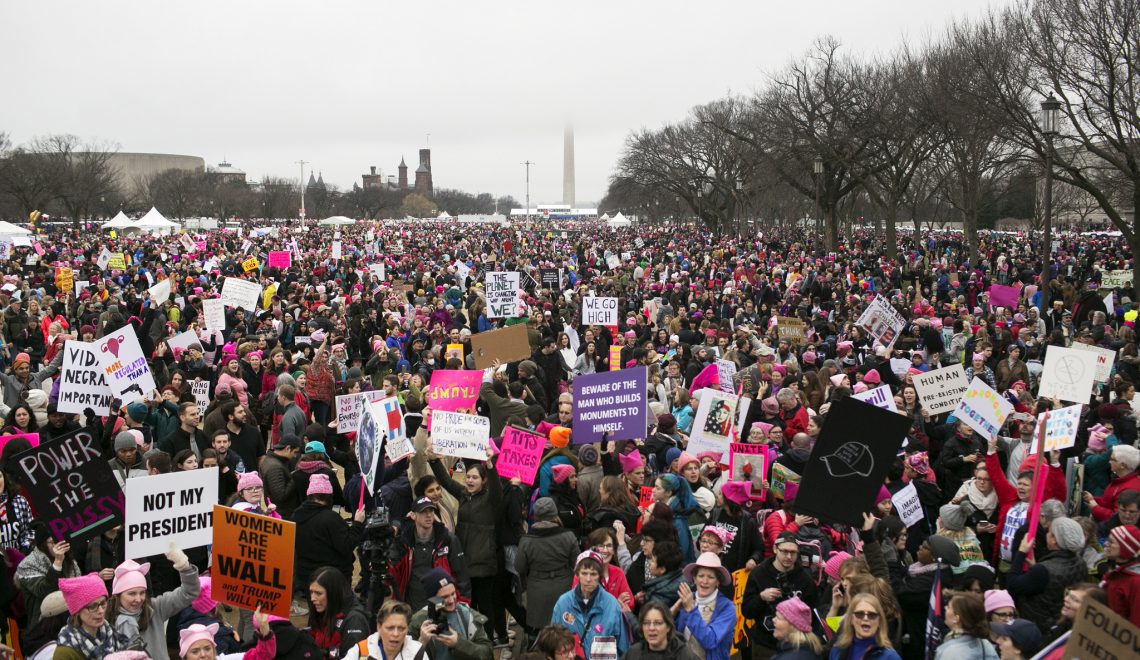 What Trump’s election means for women

I never believed in the so-called free market, free elections, democracy, humanity, peace, love, friendship, cooperation, civilization, or any of the other beautiful words which were used to hide the most brutal actions against women and the poor; actions used by ruling internal and external powers, under the capitalist patriarchal system of our globe. In our world, West and East, freedom means freedom of the powerful to deceive and exploit the less powerful, and peace means forcing people to surrender under the name of obedience to God: The Father, The Husband, The Ruler, the Invader, the Rapist or the Conqueror.

Donald Trump’s character, as I see and hear him on TV, fits very well in this capitalist patriarchal religious military world. He is much older than his wife, like most rich old men. He can ‘buy’ anything with his billions, not only women but also the votes in the election race. He can gamble at the free market of the stock exchange. I wonder why some people are astonished when he became the President of the USA. Is he worse than the others? Does he look very different from Ronald Reagan? G W Bush? Nixon? Barack Obama? Or others?

He is the product of the American system. In fact Donald Trump’s character and language remind me most of President Al Sadat of Egypt and Ronald Reagan of the USA. The three of them share similar traits, ideas and fantasies. Even their wives share some characteristics, loving make-up, diamonds, jewellery and limelight.

This kind of man loves to see his own face on TV, and to hear his own voice. He believes that some of his genes are divine. He dreams of being a movie star in sensational sex and crime films, with a gun in his hand and pretty blonde young women around him, admiring him.

As an Egyptian historical socialist feminist, I think Trump’s policies will not be very different from those of previous US Presidents. He will support patriarchal racist capitalist interests, against women, the poor, immigrants and black people. He will support Israel 100%, as he believes in the Bible, and in God’s sacred verses on the Promised Land and His Chosen People. He will oppress minorities, dismiss immigrants and build an apartheid wall between USA and Mexico, similar to that between Israel and the small remnant of still unoccupied Palestinian land.

He has already cancelled the Obama Health Care Act on his first day in office, even though it was insufficient in that it did not cover most of the poor and many women. He is not interested in climate problems, nor in any of the other disasters that may afflict the world, so long it does not touch him, or his family, or his company, or his country. For him the world is only America, and his task is to Make America Great Again, exactly as Ronald Reagan declared in 1980, with the same arrogance, conceit, super-selfish-mega-majestic-nationalistic ego.

More than 600 marches against Trump, led by women, took to the streets on 21st January 2017, on his first day as a President of the US. He ignored the demonstrations in which millions of women, men and children participated. He does not believe in the power of people. Power to him is money and pistols; like a cowboy.

Demonstrators mocked Donald Trump by showing him groping the pussy of the Statue of Liberty in New York City. He behaves like an old Roman Emperor, or a Turkish Sultan boasting of his masculinity and maleness. When I see or hear him on TV I feel as if I am going back in time to the Middle Ages.

The great women’s demonstrations, and the power of the people shook him. He started to lose some of his arrogance. I think he will be obliged to respect women’s rights, and change his policy towards them and other oppressed groups in USA and wider world.

However no one individual, even the head of the American superpower can change the global system or even the local system in his own country.

It is the organised power of the peoples in every country that can change the system. This is the lesson from human history.

I do not depend on Trump’s policy to make the world a better place to live in. I do not expect anything positive from him, or any other individual. I depend on myself to liberate myself, and on the united power of women and men in Egypt to liberate our country. To organize locally is crucial.

Global struggles should not be separated from local struggles. We use one word today: Glocal (global-local). The glocal struggle is our future, and our hope to liberate ourselves together (glocally) from the post-modern slave capitalist patriarchal colonial religious military racist system.