‘They checked our whole bodies. Everything. They took our clothes. All the men could see us in our underwear. The staff just told the men to turn their faces to the other side. All the women were checked, even under their underwear. They even checked my hair. They checked everything.’

Fatima told this story to volunteers in Bosnia and Herzegovina. She is a refugee from Iran who has been trying to reach the European Union for months. At the beginning of July she finally managed to cross the EU border for the first time. She was stopped by the Croatian border police, prevented from expressing her intention to seek asylum, and then forced back into Bosnia in a violent manner.

‘The family tried to speak to the police and ask for asylum, but the only response they got back was: “Shut up!” The police started searching through everyone’s pockets for their phones and money. They stole all of the money and any new mobile phones we had. They destroyed older models. After that, the police stripped all the men naked and frisked their bodies. When they were done with the men, the police told all the women to get naked. They touched all of their body parts, including their breasts and genitals,’ she told volunteers in Velika Kladusa.

Fatima was brave enough to tell this story. She insisted that it be spread to the world, in order to illustrate refugees’ lives today in Europe. But many refugees, especially woman, are not brave enough to tell their stories about their experiences on the refugee route and in the camps. They stay quiet, hoping they will be able to forget it one day. Some of them are trying to convince themselves that the horrors that are happening to them are normal. Violence and degradation of migrants has become normality. A majority of European citizens do not even notice that human beings are humiliated in every possible way. Due to the policy of closed borders, security issues are taking priority over humanity.

Closed borders exclude people who are searching for a safe place to live, leaving many in a very vulnerable position. One of the most vulnerable groups is women, especially those who are traveling on their own, or with only their children. Refugee camps are not pleasant places to live for anybody; for women, these places are often dangerous and degrading. In most cases, refugee camps are not constructed to make women feel safe and comfortable. One of the main problems is that there are no segregated areas for women to shower, or even just a space where they can relax and feel safe. This is only the beginning; the problem runs much deeper.

The situation makes many women keep to themselves and avoid contact with others. The unsafe environment prevents them from doing ordinary things, like going to the toilet or using the showers. The threat of being raped and sexually assaulted becomes part of the ordinary life of many women: it’s normalised, some of them say. 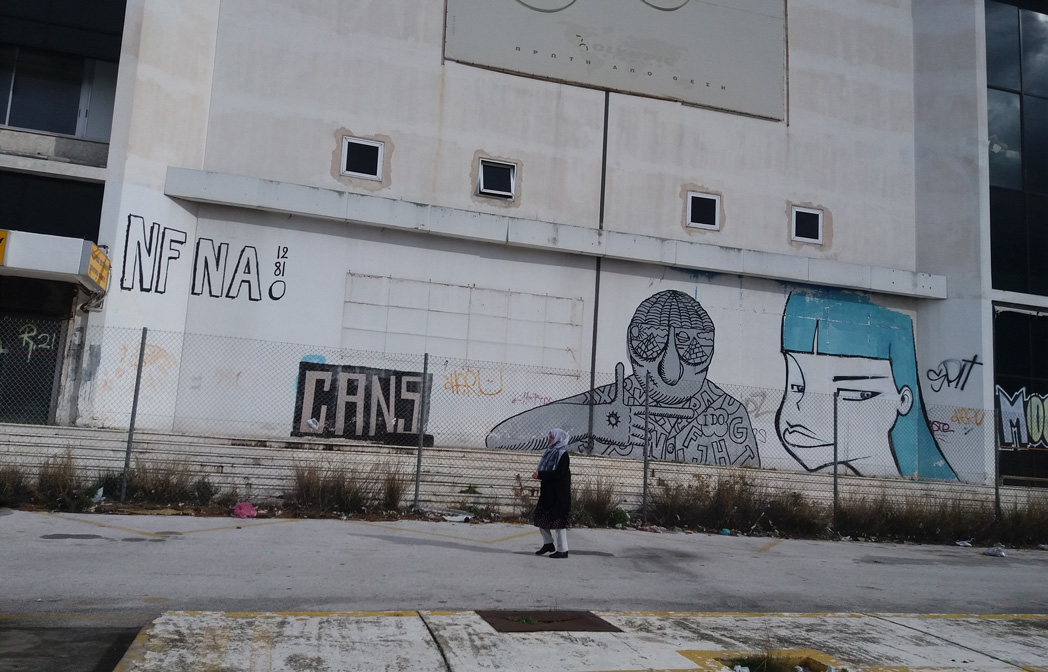 While traveling, women sometimes form groups for self-protection. Leila, Sadha and Noor, three women from Syria, started their journeys separately but met while travelling along the Balkan route. Despite feeling safer in a group, they still experienced many hardships whilst trying to reach their relatives in the European Union. In Macedonia, a smuggler took all the money they had. In Greece, one of the three was sexually assaulted. In Serbia, they all slept together in one bed in one of the big tents in Adasevci camp in fear of what could happen to them in the night. One was always awake, keeping guard.

‘Back in Syria I never wore hijab. But, on the road I do,’ Leila told us, adding that in these circumstances hijab provides some provisional protection to a woman. ‘People who are on the road come from different backgrounds. For some of them, they believe that a woman who does not wear a hijab is sending a sign that men can do whatever they want to her. At the same time, having a hijab does not mean you are fully protected,’ she explains, adjusting her hijab awkwardly; obviously something she is not used to doing.

Different human rights organisations and women’s groups around the world, are constantly warning how closed borders and the existing approach to migration is placing some groups in a very precarious situation, particularly migrant women. Back in 2016, Amnesty International issued a report saying that ‘women and girl refugees face violence, assault, exploitation and sexual harassment at every stage of their journey, including on European soil.’

A woman they spoke to told them that she felt threatened and unsafe during the journey. Many have reported physical abuse and financial exploitation, being groped or pressured into sex by smugglers, security staff or other refugees.

The same year, with the support of volunteers, a group of women wrote an open letter from the camp in Cologne, Germany, in which they described widespread sexual harassment and abuse by the camp’s security guards. They claimed that some guards were taking photos and filming women while they breastfed their children, took showers, and slept. They also claimed that rapes were taking place in the camp, and that many women were afraid to go to the bathroom alone. Unfortunately, this appeal got little attention, even though an investigation was opened.

The situation has not changed much. The only difference is that the topic has disappeared from public view. Treating refugees and migrants in a humiliating way has become normality. Being a woman in a makeshift camp is almost unbearable. In Bosnia, over 9000 refugees have arrived since February this year. There is no protection for women at all. After months of living in camps, only recently have some families been moved to a former hotel converted into a camp near Bihac, a city in northern Bosnia. Before that, the only places were two big camps in the cities of Bihac and Velika Kladusa. The living conditions in both places are extremely poor. In Bihac, the camp is located inside a building that was never completed. There are no windows or doors and the roof leaks. There are no rooms, so people sleep everywhere. The building is not safe for anybody.

In Kladusa, the camp is in a field in a swampy area, where volunteers and refugees have built shelters for people. The government, as well as agencies such as UNCHR and IOM who work with refugees, are aware that there are many women in this camp, but they have done next to nothing to protect them.

K. is a 38-year-old refugee from Iran who arrived in Bosnia in May. After being held in a closed camp for some weeks, she and her family – including a nine-year-old daughter – managed to get out. They decided to try to cross the border to Croatia but they were stopped by the border police and pushed back. The only place where they could go after this was a camp in Kladusa.

K., who was running from her country in fear that her daughter will be forced into early marriage, is on constant alert. ‘I have not been to the toilet since last night,’ she said, sitting in the plastic shelter. It is hot and almost impossible to breathe. She lives in the tent with seven other people, four members of her close family – her husband, her teenage son and daughter – and three friends. She and her daughter are sleeping at the far end of the tent, away from the doors. The tent is almost empty, with just a few bags of simple possessions.

At the bottom of the camp, there are several portable toilets. Most of the time they are very dirty and almost completely unsuitable for their purpose. Beside the toilets, there are improvised showers. Only men can be seen using them.

‘I have never showered here. As for the toilet, I prefer to go into the forest surrounding us, with my husband or son to accompany me. It is not safe here. In the shower, men can see you. There is no warm water, no place to take your clothes, no shampoo… it is hard. I am afraid here. There are a lot of men around. I have to take care of my kids. Maybe somebody will hurt them, especially my daughter. Here, I am not a woman, but a mother first,’ K. states. She and her family are hoping to reach somewhere where they will be able to continue living. ‘We are going anywhere where we can be safe,’ K. adds.

With the current attitude toward refugees in Europe, it is becoming harder and harder for many people to reach places where they will feel safe. K. is ready to endure everything to know that her family will be safe in the end. Fatima will probably try again to reach Europe. After more than a year, Leila, Sadha and Noor have made it to the European Union where their families live. When they talk about the hardship they have all encountered while travelling, they keep describing it as normal. This the only defence against all the brutality they have to face. What many people who are not refugees and migrants forget is that when this level of degradation becomes normality for one group, we will soon have to accept it as normality for all of us.

Nidžara Ahmetašević is a journalist and her work focuses on the political situation in the Balkans. She has been writing about human rights, social justice, migrations, and the media for years. As a scholar, she is focused on the role of the media in post conflict countries. Nidžara is also active in the field of peace building and social justice, and since 2015 she is involved as volunteers on the so called Balkan route while working with different self organized groups in Greece, Croatia and Bosnia.