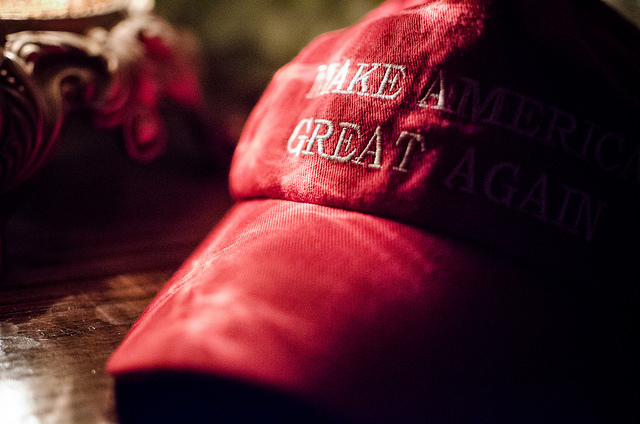 The desperate story of a Muslim woman and a Trump-voter

It was the first date of my life. I had spoken to him a few hours before on OK Cupid. I was 27, and carrying multiple rejections in the arranged marriage market that was part of my Pakistani culture. I waited for him in the coffee shop he had suggested. He walked into the coffee shop ten minutes later than the scheduled time. At this point, I realised what false advertising meant, because he was far thicker than his photo. We talked for a while, but then the coffee shop closed at 9. He was embarrassed at having suggested a place that closed so early. I told him we could walk around the neighbourhood. He agreed, despite pain due to foot surgery. I suggested a place, but mispronounced the name. He laughed; I was embarrassed.

We sat outside in the summer night, talking. I was still trying to come to terms with his obesity when suddenly politics broke out: he mentioned he was going to vote for Trump. ‘You do know I am Muslim?’ I asked. He replied that he was sorry about the horrible things Trump had said about Muslims… but Hillary supported abortion!

I went back home to a message from him on OKC. He wanted my number. I was naïve. I gave it to him. I made it clear to him that I did not want to date him but that we could hang out as friends. I thought that would make him go away, but he texted me frequently over the next four months. I ignored him and prepared myself to approach a guy from my department. I had an actual crush on him and he had lead me on. But he was very shy; the complete opposite of the Trump guy. After many Istikharas and Namaz-e-Hajats, I texted my crush on Messenger. He did not reply until the next day – to decline politely. What is worse is that the entire universe had warned me to back off because he was gay, but I had refused to believe it.

All my friends were trying to cheer me up (despite saying that they told me so). Then Trump won the elections. My sorrow deepened. I texted the Trump guy asking if he was happy? I wanted to restore my self-esteem, after pursuing and being rejected by an obviously gay man. It was the first time I had initiated contact with Trump guy. He replied, and after a few texts he suggested we meet. I agreed.

We met four days later. He started flirting and I started blushing. We started meeting every weekend. I went to celebrate Thanksgiving with his family, unsure of what was happening. He talked a lot about getting married.

I was pulling an all-nighter when suddenly he texted. I shut him off. He was polite about it and apologised. He said he wanted to make me happy but did not want to do anything to offend me. He wanted to hold my hand but was not sure how I would react since it was not appropriate in my culture. I thought it was cute.

I started taking him to parties with me. Nobody liked him because he was a Trump voter. When I was going on my holidays to Pakistan for a month, I kissed him. My first kiss ever. I thought I finally had a boyfriend. He was deeply Christian, so he did not want to have premarital sex. This made me comfortable. We did make out a lot and he was respectful about consent, unlike Trump himself, but he no longer sent me flirtatious messages.

He yelled at me when I did some research on abortion issues. He wanted five Christian kids for the Lord. He wanted me to become a Christian. He fully supported Trump’s travel ban, and the U.S’s military disasters. He jokingly called me a terrorist. I jokingly called him a redneck: he did not like that one bit. He said Native Americans were fortunate to live on so many benefits. I knew we were meant to break up.

Despite all that, I baked heart shaped brownies for him on Valentine’s Day. I biked out of my comfort zone to meet him at a car repair shop to give him a birthday present. He had always criticised the Quran and I accepted it from a reformist perspective. Later, I told him about some arguments about the Bible I had had with a preacher. Two days later, he sent a long text saying that maybe we should reconsider our relationship and make it non-exclusive. Yuck. All my life, Pakistani men had rejected me and now American men had started doing the same. I told him to meet me and talk in person.

He walked to my place. He told me he had already gone on dates with a few women. He suggested that at least we should stay friends. I told him no. I still offered him home-made okra and rice. I told him most Pakistani girls don’t indulge in multiple partners and most don’t let guests leave without serving them food. He ate it all and walked out. I saw him a few times around the city but I have never missed him and I am happy. I am still single – but it is okay.

A graduate student from Pakistan living in the U.S, lost in between cultures. My interests include getting into arguments, shutting up mansplainers, and trying to be more productive with my life, whilst consoling my parents regarding my single status.