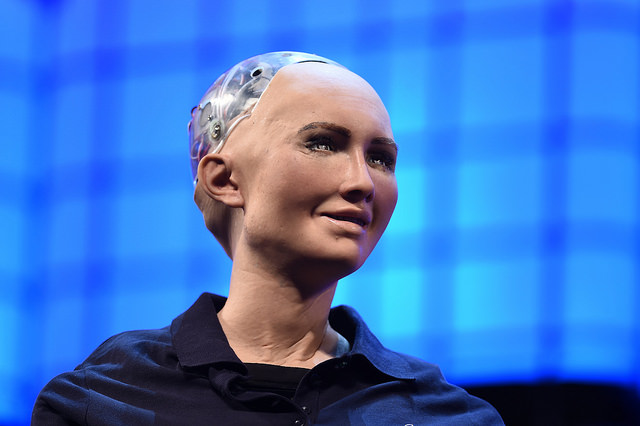 Women in the Arab world have been denied full citizenship rights for decades by governments who provide excuses such as geographic or political constraints and fears. In reality, denying citizenship rights to the families of women who are married to men of a different nationality is pure discrimination.

Saudi Arabia and Jordan are two examples of countries which discriminate against women when it comes to citizenship rights, where men, investors, and even robots have been granted full citizenship, whereas women who marry foreigners lose their citizenship status.

Many people took to Twitter to point out that ‘Sophia’ technically had more rights than Saudi women, as the Independent reported in October. One woman tweeted: ‘Sophia, the first robot to be granted citizenship in Saudi Arabia, has more rights than the human women there. Strike anyone else as odd?’ Another user wrote: ‘I’m wondering if robot Sophia can leave Saudi Arabia without her guardian’s consent! Since she’s officially Saudi.’

Others were more vocal and blunt about it. ‘Women [in Saudi Arabia] have since committed suicide because they couldn’t leave the house, and Sophia is running around’, Ali al-Ahmed, director of the Institute for Gulf Affairs, told Newsweek. ‘Saudi law doesn’t allow non-Muslims to get citizenship. Did Sophia convert to Islam? What is the religion of this Sophia and why isn’t she wearing hijab? If she applied for citizenship as a human, she wouldn’t get it.’

While a female robot was offered citizenship in Saudi Arabia, activists in Jordan were outraged that their government had shoved aside almost two decades of demands to allow Jordanian women the right to pass on Jordanian citizenship to their families, yet had decided to offer it to investors.

In mid-February, the Jordanian government decided to grant investors Jordanian citizenship or permanent residency, on the condition that they made a zero-interest, five-year $1.5 million deposit at the Central Bank of Jordan (CBJ), or bought treasury bonds valued the same amount, at an interest rate to be decided by CBJ and for a period of no less than 10 years. The decision included the family of the investors as well.

‘This is a provocative and outrageous decision by the government that allows foreign individuals to obtain Jordanian nationality based on their financial means, while bluntly denying this right to Jordanian women,’ said lawyer and activist Noor Imam.

This decision ‘also comes in favour of rich women, who can now invest and obtain citizenship while the poor do not have this privilege’, Imam added.

Government officials defended the decision, saying it was meant to encourage investment in the Kingdom and boost the national economy.

‘Children of Jordanian women married to non-Jordanians have been granted the same treatment and privileges to ease their lives. This decision is to encourage investment and will be in the interest of their families as part of the Jordanian society’, government officials have said.

But activists rejected the government’s justification and Naffa charged that, ‘there are always excuses in this case, such as wanting to protect the sovereignty of the country, but now they have opened the door to anyone who has money to obtain citizenship, but not the families of Jordanian women who are married to non-Jordanians.’ Priority should be given to women who are loyal to Jordan and who have raised their children to also be loyal to the state, Naffa argued. Individuals and entities who oppose granting citizenship to the family members of these women, particularly those with Palestinian husbands, say such a measure will only lead Israel to implement its ‘ultimate plan of creating a substitute homeland for Palestinians in Jordan’.

Government figures show that there are 88,983 Jordanian women married to non-Jordanians, mostly Gazans, with 355,932 children born within these families registered with the Civil Status and Passports Department. Palestinians, except Gazans, who became refugees after the creation of Israel on Palestinian land, and those who were living in the West Bank when it was occupied by Israel in 1967, have been granted Jordanian citizenship.

Depriving the families of Jordanian women of nationality means that they have to visit police stations every year to register themselves, among other daily life challenges such drivers’ licenses, work permits, enrolling at schools and universities and visiting health institutes.

Hundreds of family members of Jordanian women married to non-Jordanians continue to demonstrate to this day in the hope that the government will take the decision one day to grant them full citizenship rights.

The late Nimeh Habashneh, who is married to a Moroccan, and who is a mother of six children, spearheaded a campaign on Facebook in 2009 entitled ‘My Mother is Jordanian and her nationality is a right for me.’ Habashneh did not live to enjoy some of the privileges that were provided by the government in recent years, which have eased some of the challenges which her children and thousands of other young people in Jordan had endured on daily basis.

In February 2015, Habashneh, 56, lost her battle with cancer, following her husband who had passed away in 2006, also from cancer.

Habashneh had repeatedly claimed that ‘the government is treating women as half citizens by denying them this right, while Jordanian men can marry up to four foreign wives and give them and their children citizenship. The government has to decide whether we are full citizens or half citizens in this country. Nevertheless, I will never give up and will continue to demonstrate until all our demands are met by the government.’