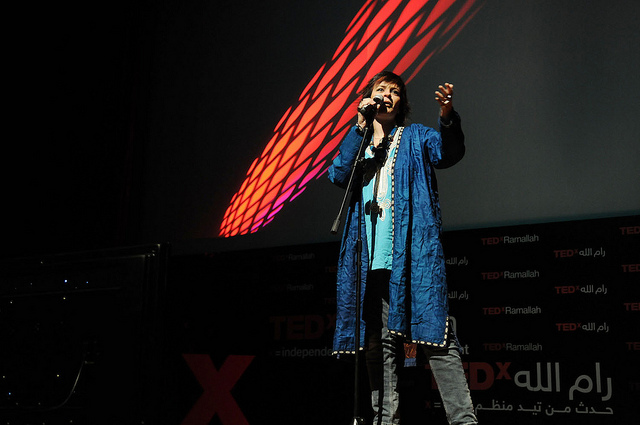 The world has lost a talented and powerful Palestinian singer and composer. Rim Banna passed away on March 24 after losing her nine-year battle with breast cancer.

Banna was a defiant and strong woman who used her voice to sing for children and about the suffering and the plight of Palestinians. She was a symbol of resistance who expressed pain through art and through song, and became an advocate in raising awareness about cancer.

Usually, it is very hard to write about someone you do not know personally, but not in this case. She was able to reach my heart and mind, and those of millions of people through her powerful, assertive and magical performances, through the positive spirit and vibes she expressed via dozens of interviews and performances over the years.

I always looked up to her because of the way she handled herself and her pernicious disease. She would always say that she sang for people’s pain and for their happiness. When she learned she had cancer, she remained optimistic and only became more stubborn. She hosted shows and appeared in dozens of interviews to talk about her ordeal and to raise awareness about breast cancer.

Banna, who lived in Nazareth, was divorced and had three children to care for and empower. When her children learned she had cancer, she tried to reassure them by explaining that although her life was limited there was a better world waiting for her. ‘My life is like an old shirt that will not last…,’ she told them. ‘Taking it off means walking through the roses towards my coffin.’

It was as if her life restarted after learning of her illness. She used the nine remaining years of her life to sing and empower others, including her three children. She just carried on with her daily life despite the difficulties of her situation.

She didn’t stop singing until 2016 when she was hit with another health issue and lost one of her vocal cords to sickness. This did not stop her; she pledged to continue composing and creating music.

The National reported recently that Banna was in the process of recording an album when she was forced to stop. Lebanese independent singer-songwriter Tania Saleh, who was inspired by Banna, said she viewed her as a kindred spirit. ‘Her last artistic statement is a genius new album where she turns her medical files into [backing] sounds while she recites her poetry. She has turned the painful experience of her condition into beautiful art,’ Saleh said. ‘Her last posts on social media while at the hospital were full of humour and light-heartedness as she challenged cancer with grace.’

Banna’s funeral in Nazareth was very emotional. Thousands of women, men and children marched behind her body singing her songs.

Upon hearing of her death, politician Ayman Odeh tweeted: ‘RIP Reem Banna. One of the pillars of the progressive Palestinian poetry, generations lived with the inspiration of her words and I am one of them.’

Celebrated Lebanese Journalist and Poet Zahi Wahbeh also wrote after hearing of her death: ‘Rim Banna resisted two malignant diseases; cancer and the Israeli occupation [of Palestine]. Rim Banna, the singer of Palestine that was in the hearts and throats of the resistance fighters. Goodbye my friend.’

Banna is survived by her mother Zuhaira Sabbagh, who is a poet and artist, her brother, and three children.