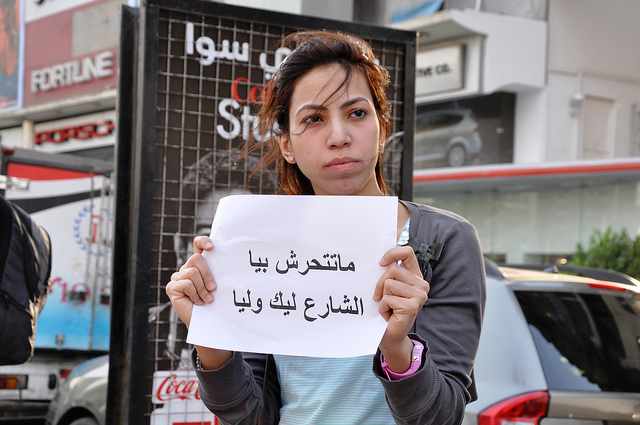 These are our streets too

The world – including Jordan – has marked this year’s international 16 Days of Activism Against Gender-Based Violence Campaign with a focus on the phenomenon of the sexual harassment of women.

In Jordan, the motto for this year’s campaign was: ‘Speak Up… Harassment is a Crime!’ Several local studies were conducted to raise awareness about what was termed a ‘silent phenomenon’ since many victims were afraid to speak up about violations against them. As expected, the numbers recorded were stunning. 80% of women had experienced cases; around 70% from people they knew.

But I feel that these figures, although they were done in the most professional and scientific way possible, do not really reflect the magnitude of the problem.

Why do I say that? Because every time I have engaged in discussions of the topic over the years with my friends, or have heard women talk at conferences or in small groups, I always hear a story of a woman being subjected to sexual harassment.

More recently, when I decided to write this article for sister-hood magazine, I asked around 30 females who are either in my close circle of friends, or who I know through my work, if they have ever been subjected to any form of sexual harassment in their lives. Sadly all of them confirmed that they had been subjected to all forms of sexual harassment, including at school, on the street, at work, by other friends, family members, and through social media.

I am reminded of an incident involving a friend of mine in the mid-2000s while she was driving in Amman. The police were passive when she went to report the abuse. She was so enraged that she invented a song with a male-friend reflecting upon what she described as ‘the humiliating and degrading event’.

I still remember her words and the amount of anger and frustration that was expressed in the song she wrote. She quoted what the man who harassed her had said: ‘Look at these breasts… look at their size… how much do you want to sleep with me? Is five dinars ($7) enough?’ Her song goes on to describe a second ordeal after the harassment: dealing with the police when she went to file a complaint after this horrible experience, stating that the officers were ‘cynical, and basically made her feel that she was to the blame for being harassed!!’

Internationally, this year’s theme for the International Day for the Elimination of Violence against Women which took place on the 25th of November, and the 16 Days of Activism – Orange the World: #HearMeToo highlighted the voices and actions of survivors of violence and advocates around the world.

The exposure of the sexual harassment problem has been huge in past years, thanks to the online campaign #MeToo which has raised awareness and encouraged thousands of people, mostly women, to come forward with old and new incidents of sexual harassment. The campaign has forced many individuals to admit their acts and face prosecution. Some have even been sacked or forced to quit from high-level and decision-making jobs, TV shows and movies.

UN Women has recently stated that no country or organisation was immune from sexual harassment and violence, and that women and girls from all corners of the world experience violence and abuse. This year’s Nobel Peace Prize, awarded to Nadia Murad and Dr. Denis Mukwege, has paid tribute to the voices of survivors and advocates who are courageously fighting to combat sexual violence.

Due to social stigmas and taboos, the issue of harassment has been shoved under the carpet like many other forms of violence against women for a long time. But not any more… Enough is enough! Don’t feel ashamed or scared. Just report it and be brave and outspoken about it. The silence about sexual harassment has been broken for good.