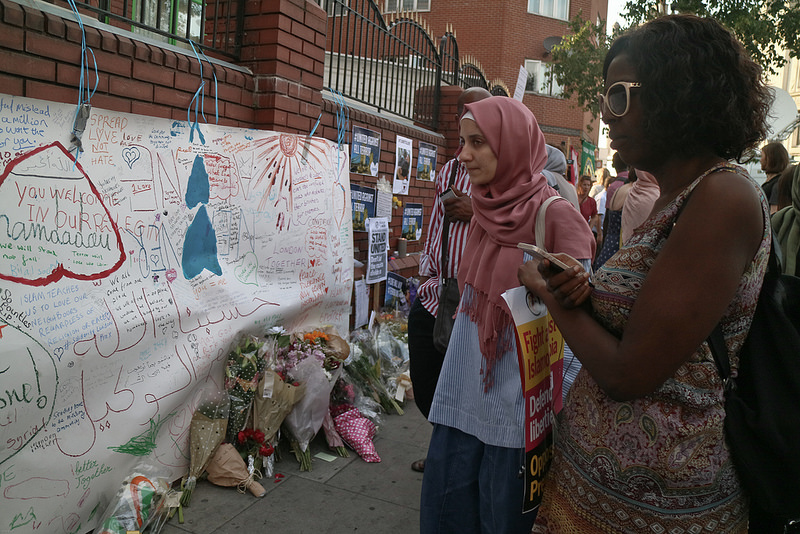 After events in Charlottesville US, where one woman was killed and 19 injured by a van driven by a man with links to white supremacist movements. Roda Musa reminds us that it has only been a few months since a right-wing extremist attacked Finsbury Park Mosque in the UK with a van, killing worshipper Makram Ali.

In recent months, Britons have seen a terrifying rise in acid attacks. Most worryingly for its Muslim community, many of these have been targeted islamophobia, such as the attack on Resham Khan on June 21.  Resham Khan and her cousin Jameel Muhktar will have to live with the consequences of this hate crime for the rest of their lives, while white Brits continue to share videos of right wing extremist Tommy Robinson that label him an ‘activist.’ Simply put, it’s dangerous for me, a visible Muslim woman, to go about my day and not worry that someone might have a burning desire that day to scar my face for life.

The U.K. has had its foundations rocked a few times this year, with a spate of terrorist attacks in Manchester, and twice in London: attacks that caused much anger as they targeted young girls and people enjoying their evenings.  Yet Manchester, London and the U.K. as a whole pulled together, with love and collective sorrow. We saw article after article with heartfelt statements of strength and patriotism. We saw our nightly political programmes interrupted to reassure the public that we would not become numb to such assaults, as we were resilient, united and we would fight back. And rightly so, attacks on the innocent should never be tolerated or accepted.

Yet when the Finsbury Park attack took place, with a white van ploughing into late night worshippers who were observing Ramadan, it wasn’t immediately labelled a terror attack. Most British Muslims were awake when the attack took place, and saw the immediate headlines. It was simply described as ‘van ploughs into pedestrians’. Some can say that this was a case of journalists erring on the side of caution in the immediate aftermath of an aggressive attack. The following days after Finsbury, and after the Islamophobic acid attacks, there was a distinct and noticeable silence, compared to the constant stream of thought pieces we’d see when the attacker is a Muslim. Instead, there was an effort to shame the victims of the attack.

There was no one asking where these white men were radicalised, no one questioning if we were too tolerant of Islamophobia, even though this would mirror the Prime Minister’s sentiment following the London terror attacks, when she proclaimed that Britain was too tolerant of extremism. Of course Theresa May meant the extremism most closely associated with Muslims. Britain likes to cast a blind eye to the extremism of white men.

British Muslims are often berated and hounded for not doing more to stamp out extremism in their communities.

The Muslim community can & should do more to root out extremists. You should encourage them to do so. Urgently. https://t.co/dI6WABxbhT

Yet the Manchester bomber Salman Abedi had in fact been reported by members of the Muslim community in Manchester. Each and every time public figures ‘urge’ Muslims to do more it implies that British Muslims would rather conceal extremists – when the attackers are often already known to security forces. As if Muslims don’t have the double fear of being caught up in one of these suicide bomber attacks, we can now add a fear of the Islamophobic backlash aimed at British Muslims. British Muslims are dehumanised in this way – as if they themselves don’t have the same concerns and worries of other Brits.

Britain and its tolerance of the far right is visible so clearly in mainstream media. This is a fact that nobody is willing to discuss. Figures such as Nigel Farage and Tommy Robinson, appear regularly on national TV and are given platform after platform. Katie Hopkins, who recently called for a ‘final solution’, is able to spew hate on a mainstream radio show. This is the extremism we are far too tolerant of.

How is Farage and Hopkins’ use of Nazi imagery and language something we can ignore?

Brits take great pride in their freedoms and multiculturalism, but for many British Muslims, it’s getting harder and harder waking up every day and facing news like the Finsbury Park attack and another case of acid attacks and continue to believe that Britain is an open and tolerant society. It’s time we discussed the far right, as well as the deep rooted and connected problem of male violence in our society.

Roda Musa a 20 year old history student studying in the U.K with a passion for politics, feminism and journalism. As a young Black Muslimah it seemed paramount to get involved with not only politics but also social justice.