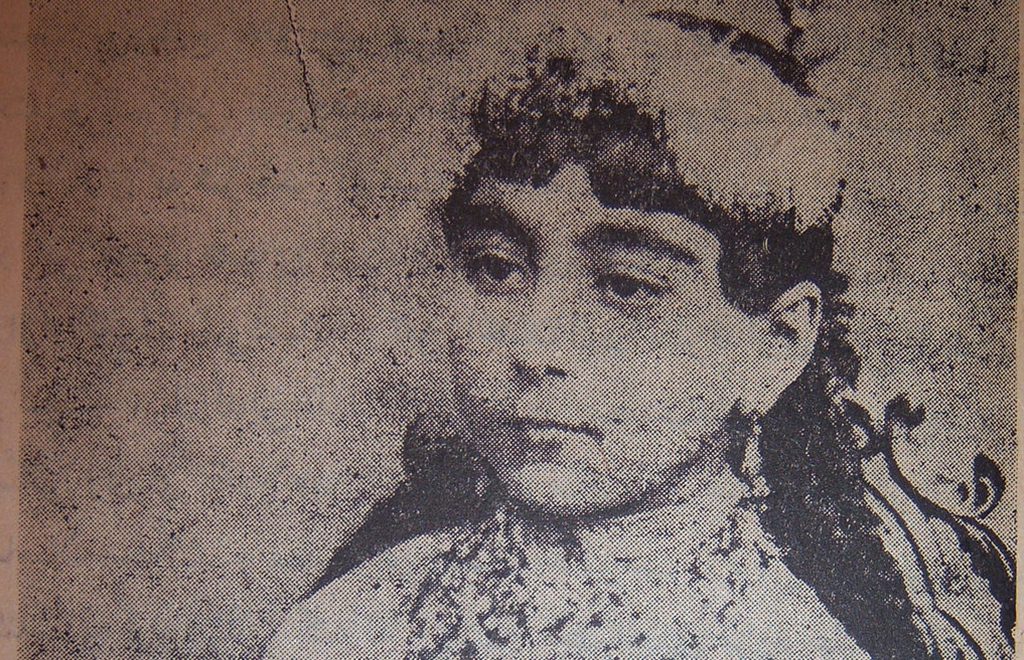 Of mankind’s great misfortunes one is this; that one must take a wife or husband according to the wishes of one’s parents.

Taj al-Saltana, one of the daughters of one of the Qajar kings of Iran, is best known for her 1914 memoirs, which cover a period of over 30 years of her life. These writings are amongst the earliest examples of autobiography by an Iranian woman. They reflect a period of massive political and social change in the country as well as her own life story.

Taj al-Saltana (a generic name, meaning ‘crown of the monarchy’) was the daughter of Naser-al-Din Shah and a minor princess, born into the confinement of the royal andarun (harem, literally meaning interior) in the centre of old Tehran.  She was cloistered away from the public eye due to being considered part of the ‘honour’ of the royal family. Her memoirs describe growing up amongst five or six hundred women – maidservants, concubines and wives. According to the conventions of the andarun, Al-Saltana was almost entirely raised by her nanny, a black woman who spoke pidgin Persian, likely one of many East Africans trafficked into Iran as slaves. At seven, she was assigned a teacher and a eunuch for her education and protection. Al-Saltana’s mother doted on her son rather than her daughter, and even beat her severely on one occasion. Her father, with many children and wives, was distant, though affectionate.

After her parents rejected various suitors, her marriage was settled at the age of eight. It took place under tragic circumstances, after the assassination of her father, when she was 14 years old. Her husband, Amir Hussein Khan Shoja’-al Saltana, the only surviving son of the commander of the king’s special guard, was a childish and ill-disciplined scion of a noble family.

Her marriage was unhappy. Initially it was a union intended to profit her husband’s family; however, the death of her father and the coronation of a new shah limited its political usefulness to them. The couple were ill-suited from the start. Al-Saltana found Hasan petty and spiteful, and her in-laws appeared determined to prevent any understanding developing between the couple. Hasan had frequent affairs with other women, men and boys. This led to him possibly infecting his wife with gonorrhoea or syphilis. She herself recounted passionate, if chaste, affairs with other men from the early days of her marriage. Further, the couple were in enormous debt due to their lavish lifestyles, including Hasan’s interest in horses. She had a great love of luxury holding glamorous parties, featuring music and poetry. Ultimately, she was abandoned by her husband in 1906, due to his unwillingness to support her feminism or her nationalism, as well as his own libertine habits.

Al-Saltana’s major interest was exploring the ‘harem mentality’ which had been intellectually stifling for her, as a sharp-minded young woman. Her memoirs draw back the curtains on the lives and experiences of the women and servants living within the andarun, criticising the stultifying atmosphere of life within its high walls. She exposes all the secrets of the aristocracy; covert romances, bizarre pastimes and political machinations, including her account of her father’s assassination. Further, she chronicles the rapid dissolution of the andarun after his death, where all of her father’s wives and retainers were cast out and awarded stipends: a precipitous loss of their security.

One of her interests was promoting breast-feeding, feeling that this act would promote the maternal bonds which were so lacking from her own experiences. She played a role in the establishment of the Society for the Emancipation of Women (Anjoman-e Horriyat-e Nesvan) which evolved from revolutionary societies of the Constitutional period towards the end of the 1910s; a period during which feminists in the UK and France were campaigning for suffrage. Al-Saltana saw women’s roles in Iran’s future as being more significant than producing and educating children. She wished for them to be seen as active participants in Iran’s politics. As such, she called both for the unveiling of women and their participation in the workforce: the direct opposite of the sequestered lives of women she experienced in her early years. In her writings, she envisaged developing Iran’s industry, from mines to irrigation projects to tapping the oil reserves in order to ensure the country’s independence. She deplored the way women lived ‘crushed under the weight of bitter ordeals’ and sought for a greater inclusion of women in society. In this she was not just inspired by the work of her feminist contemporaries in the West, but by the traditions of rural Iran, where she described unveiled women, working side-by-side with men in the fields.

The couple had two daughters and two sons. She died in Tehran in poverty in her early fifties. As one of the first women involved in the Iranian feminist movement – a movement which has had an enormous impact not only in its country of origin, but across the region – Taj al-Saltana can be counted as one of the foremothers of feminism in the Middle East.