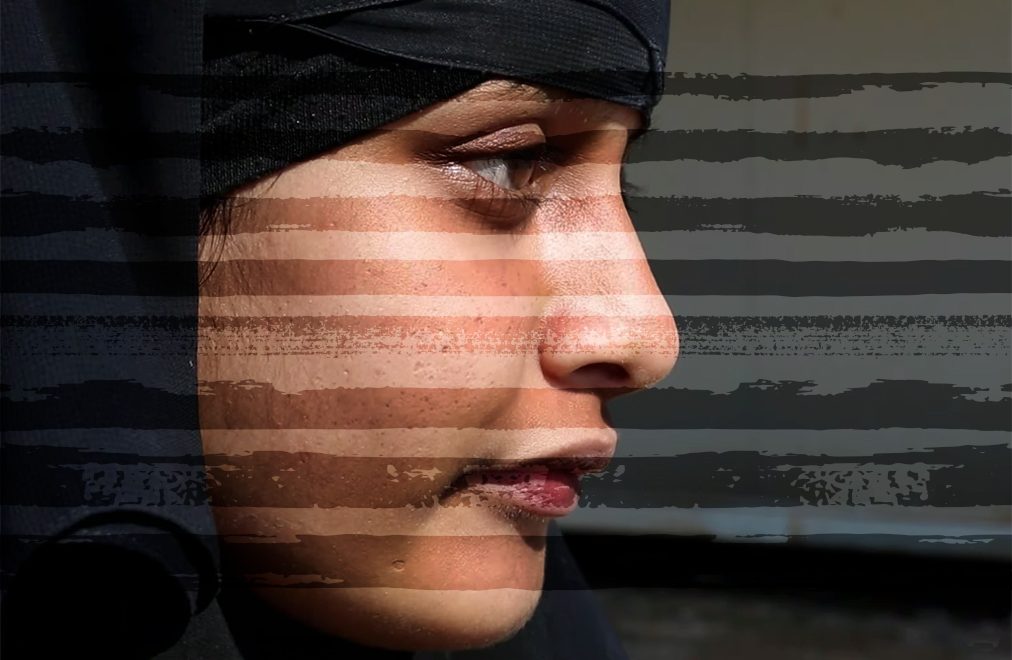 The case for Shamima Begum

Picture this: a 15 year-old Shamima Begum from Bethnal Green, East London, straight A student studying for her final GCSE exams, well-liked by her peers and teachers, falls prey to grooming and is recruited by sophisticated ISIS propagandists, along with three other, equally bright, school friends. Over a period, they are brainwashed into believing that it is possible for them to fight a terribly unjust war against Muslims in Syria and that they have no place in the West because they would be discriminated against for being Muslim girls and for wearing the hijab. Like the victims of rape gangs, they are entrapped by their groomers, and persuaded to leave their families to find the ideal, utopian society in Syria. These girls are then trafficked to be exploited by ISIS via underage marriage. Three vulnerable 15 year-olds manage to escape the UK without causing any suspicion or alarm from the authorities.

Fast forward to four years later: a heavily pregnant Shamima Begum is found in a refugee camp by a newspaper reporter. She has married a Dutch citizen convert at 16 years of age, and has already lost two young children on her way to the camp in North East Syria, where she is now. She is desperate to save her third child by making a plea to be allowed to return to the UK. The interview that follows seals her fate when she states that seeing a severed head didn’t faze her. This is broadcast on every media forum in the UK. The public outcry is unanimous, making her the ghoul du jour. The context and background of Shamima Begum’s grooming and indoctrination by ISIS evaporates from the national public discourse. The media’s predatory reporting on Shamima Begum and subsequent trial-by-tabloids exacerbates the hysteria.

Three weeks after her son’s birth, Shamima Begum loses her third child to pneumonia. At still just 19 years of age she had already endured so much. What ensued lacked any semblance of sympathy or understanding for her. The former Home Secretary’s decision to strip Shamima Begum of her British nationality stemmed largely from the public outcry from people that did not want to let the 19-year old back in the country. ‘She’s no longer our problem’ was the common argument. The government’s handling of her case was more about the radicalised and toxic populism of Brexit-era Britain than it was about national security, even though that was the term bandied about.

But it was simply dangerous and unjust for Shamima Begum and other UK citizens like her to be left to be someone else’s problem. The Court of Appeal has now ruled that Shamima Begum, now 20 years of age, can appeal the government’s decision to remove her British citizenship. This ruling is a remarkable rebuke to the government. It is a hopeful sign that a court is taking the moral and legal high ground rather than playing race politics. Whatever the circumstances, leaving British nationals in a region with no state or legal system was neither just nor humane to ISIS victims, or to the Kurdish-Syrian Democratic Forces (SDF); nor was it a legally sound decision. The court’s conclusion that repatriation security risks can be ‘addressed and managed’ is significant. It may well be a ruling that could have implications for other European countries that have so far refused to take responsibility for their citizens.

The Home Office has found the Court of Appeal’s decision ‘very disappointing’ and is planning to appeal. However, it is difficult to see how the government might succeed, since the Supreme Court would have to make a completely different decision about the feasibility of a court appeal launched from a remote location in Syria.

Western governments should shift policy, take responsibility and repatriate their citizens from Syria. Shamima Begum may very well be a security risk – but she is also a British citizen. Britain has legal and moral obligations towards her. Citizenship is about rights and responsibilities and it is applicable to everyone. The fact that this country could not protect her and let her slip away, that this country could not show her a better future; the fact that it could not try her, convict her or deradicalise her is beyond shameful.

When then Home Secretary, Sajid Javed, decided to strip Shamima Begum’s British citizenship last year, it was a reminder of how fluid UK citizenship laws are, and how dramatically they can change with changing governments. It also highlighted a disturbing fact that British-born children of immigrants are not, in the final analysis, treated as British. Shamima Begum is a born and bred British citizen. It was a troubling decision to rely on her parent’s previous Bangladeshi citizenship in order to comply with international law where no citizen can be made stateless.

This leaves most UK citizens of South Asian heritage in a deeply vulnerable position. Many haven’t even been to their country of heritage or have any sense of association or belonging there. Why would they be rendered unBritish in certain circumstances when it should be the responsibility of the country of birth and belonging to deal with their transgressions.

One doesn’t need to go very far into the past to see why many are justified in feeling vulnerable about their ‘Britishness’. This hasn’t been the first time, in recent memory, that the debate about citizenship was highlighted. In 2018, the wrongful deportation of Afro-Caribbean British people, also known as the Windrush Generation, to countries they barely knew, became a national scandal.

Everyone is entitled to equal treatment before the law, regardless of what they may have done or what they are alleged to have done. This is the bedrock of the rule of law and democracy. Making exceptions to placate populist outrage is the sign of a crumbling civilisation. By the same token, everyone is also entitled to a fair hearing. The removal of a person’s citizenship is one of the most far-reaching decisions a state can make. Do any of us living in the UK want to see this as a country where politicians can act with unchecked power?

It’s still a staggering realisation that Shamima Begum – or anyone else in her situation – can be made un-British in the first place, whatever her crimes may or may not have been. This two-tiered system of justice is fascist in its premise and lacks in principles. It is a dictatorial practice to exploit the concepts of justice and security to override human rights.

Fundamentally, far too many in this country believe that if you aren’t white then you aren’t ‘one of us’ and are liable to be told to ‘go back to where you came from’. A two-tiered system of citizenship only perpetuates these racial politics. Whatever Shamima Begum may have done, it cannot justify the erosion of the citizenship rights of British people.