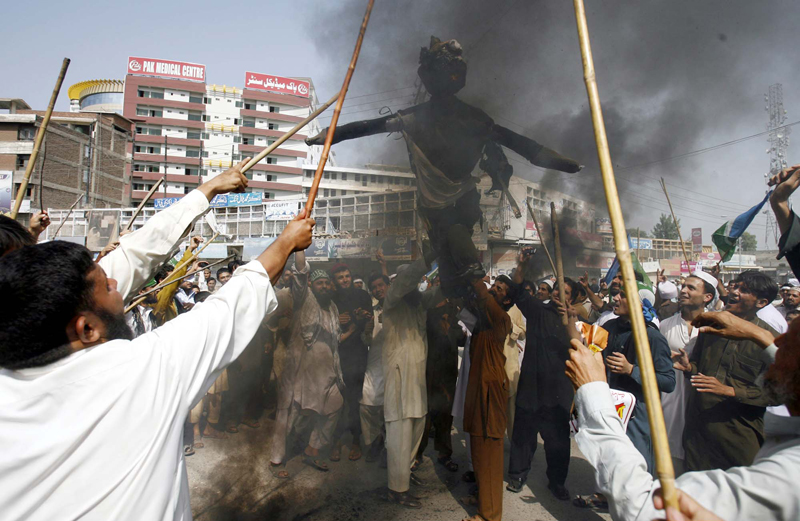 In the name of religion

Allahu Akbar, they chant in overwhelming frenzy,
In vain our men are slain in the name of religion,
Take off your rose tinted spectacles,
Dare to ponder and look around yourself.
You – my dear, average Pakistani – are not free.

Chaos is the disruptive violin playing in the air,
Scare tactics are on the rise once again,
Men in disguised robes have hijacked our country.
Will the military intervene, will this noise end?
Will the foundations of Islam be shaken so easily?
Will humanity and justice be derailed under tyranny?
Once more, they have declared a fatwa against
Our government’s policy, calling secularism a farce.
Soon there will be a nationwide strike again.
Who do we blame for craving more lives and blood?
Why do you rave and chant this ludicrous chorus
Of freedom and glory? Why? You are still enslaved,
Chained, and a prisoner in mere shackles.
It’s NOT the British colonists or Hindu masters
Who have hijacked your freedom this time!
Nay, your own people are your open enemy;
Calling you a kafir, you are severely scattered.
Their hollow pursuits are based on disloyalty
Slaughtering the essence of pure humanity!
Look around yourself; it’s not the white men in boots
Who you can so easily blame. No, it’s your own kind.
When will this violence and division amongst us cease?
Will this storm of vicious power dynamics ever end?
Will our men be united under the flag of love and peace?
The oppressed and silenced of this land are in chains,
The rivers are crying tears of blood, will justice be sold?
Forest sparrows frown upon our destruction, cursing us.
Roses grown in the Garden of Rumi’s light have withered,
Where is Humanity? Where is Humanity? They ask questions!
Has humanity been throttled, butchered and perished too?
The daisies, jasmines and all the roses are in disbelief!
Parrots are calling out in shrill tones, begging us to stop.
In unison they chant, Allahu Akbar, Allahu Akbar,
As humanity is brutally slaughtered, in the name of religion.

Safinah is a lawyer and social activist. She has written on social and human rights issues for various local and international portals. She spent her foundational years growing up in South London, and has a strong flair for both Eastern and Western cultures. She is a Sufi at heart and an aspiring author who loves humour and sarcasm. She strongly believes in breaking the shackles of oppression, the status quo, and power dynamics and believes in the quote, ‘Those who stand for nothing will fall for anything.’ Standing firmly on the path of truth with a sword of pride against the hypocrisy of tyranny.