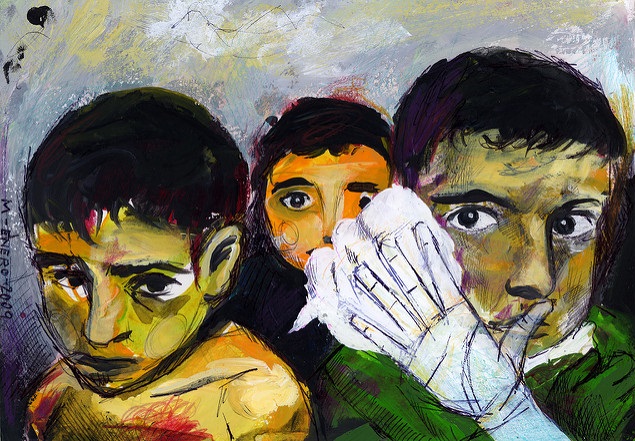 ‘Not long ago you were beside me. Where did you go? Your place became vacant and now I am alone waiting for nobody. No one will visit me; it’s a very hard feeling.’ This is how Fida described the first day of Ramadan 2017. At iftar, she only had empty chairs and memories.

Fida, who is still in her thirties, is a mother of three girls and three boys. She recounts her story in tears: ‘What can I say and where shall I start?’ She recollects her thoughts and words, ‘During the last war on Gaza in 2014, about 70 people were in our home hiding from the rockets and bombs that were falling on us from all sides. We left home in the early hours of dawan, escaping death.’

‘My husband, my son Shadi and I took a road, my other children and some of the other family members took another road, heading to their uncle’s house. We received a call that our children had arrived at their uncle’s house. My husband hurried to be with them but Shadi insisted on going to his sisters and brothers in his father’s place.’

She continues, her body shaking, ‘Shadi arrived at his uncle’s house to bring his brothers and sisters to join us, but his uncle prevented him from going out until the shelling had ended. Shadi insisted on going out with his sister Ula and brother Fadi. As they reached the end of the street, bombs and shells hit them and killed them instantly.’

Fida tries to recall details with extreme difficulty: ‘My husband called Shadi but got no answer. We went to Al-Shafa Hospital to look for our children hoping that what we had heard was wrong. After a moment, my husband’s mobile rang and a person told my husband that our children had been killed and that they were now in the morgue.’

Fida’s life turned to emptiness after she lost half of her family members at once, leaving her with devastating memories and pains. She decided to compensate for her lost children, she says, ‘A year later, I gave birth to a baby girl whom I called Ula after her deceased sister. Another year passed and I gave birth to a boy called Shadi. But my dream to give birth to a boy I could call Fadi failed after I underwent a hysterectomy due to a medical error following a Caesarean.’

‘So life takes a lot from us and gives us little in return. I try to overcome my grief, raise my children and take care of my health, which is already drained by grief and pain. My memory, hearing and sight became weak and I still dream that the perpetrators of these war crimes who deprived me of my children will be prosecuted. The pain in my heart will be reduced if we can achieve justice for my children.’

Samah Sokar, is a 22-year-old woman who lives in Gaza. She has a B.A in Law and participated in many training on in UN resolutions and conventions . She also worked in the field documenting the suffering of women under occupation and documented many testimonies in this regard. In her spare time, she enjoys reading, writing and learning different languages. Her future plan is to assume a decision-making position in international agencies and eventually joining the The International Criminal Court in The Hague to bring the issues of Palestinian women internationally.