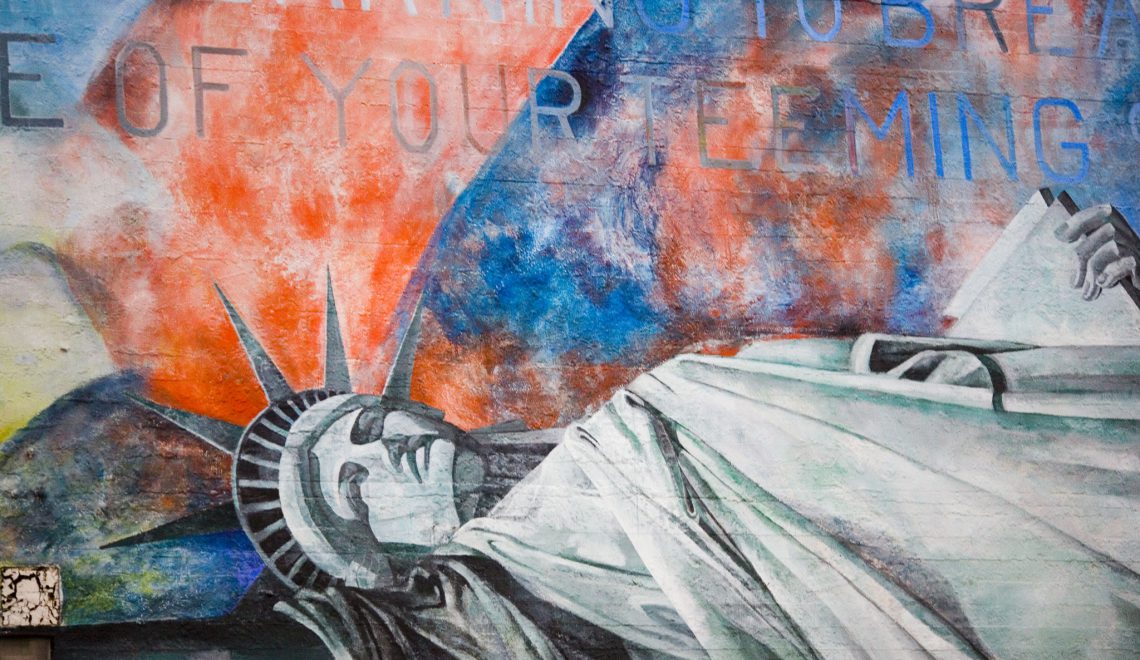 Day 8
Today, apart from trying to understand what’s going on, the question has been ‘how do you maintain normalcy when all of a sudden you feel like you’re in a vast open prison?’ My apologies to my American friends and to this stunning country for this analogy, but freedom of movement has always been in my spirit. Funny how far off memories resurface in these moments: my first exposure to communism – aged around 8 – was when I heard about how the system provided healthcare and homes and so forth. My one question was ‘but can people travel out of Russia?’ and the answer was no. That did it for me. I was never going to be a communist. But here I am, not in a state of communism, but one of extreme capitalism and creeping authoritarianism, unable to travel abroad. The labels may be different but the human experience is much the same when the ‘isms’ take over.

However, because we are ‘revolution-resilient’ we know that normalcy itself is a form of resistance. So today was an exercise in being normal – a stop at Safeways and plans to see La La Land – yes to just go La La. wtf?!

But the irony is ever present. In the aisles of Safeway surrounded by an endless choice of toilet paper (so American) – I couldn’t help but think…freedom to choose (you can imagine the rest), but no freedom to move. So very unAmerican.

The kids are fully aware of this new norm. They are old enough to understand we have complex histories, and young enough to feel the injustice and stupidity in their gut. But it silently breaks my heart that they have to be exposed so early on to how the personal and the geopolitical seem to sway our lives.

Being a strategist, I’m looking at the scenarios and options: The choice between staying in the US with them and going to London to see my mother, or being able to work abroad: OR going to London and risking being barred from re-entry to the US. Or frankly, the choice between the US and the world. Do I wrench the kids out of their life here and opt for the World, do I pack up life here and return to the UK – the country that I call home, hoping citizenship means equality? All false choices right?

The only silver lining is that if I can find a ‘consular officer’ to discuss my status, he/she may give me the green light to travel and return. But given that my passport has visa stamps from Russia, Pakistan and Afghanistan, perhaps it’s best to avoid those guys for now.

More than anything, I’m just irritated that in the first half of my life I’ve had not one, but now two experiences of revolution – because make no mistake – this is a revolution of the uprooting, upheaval, take no prisoners kind. And really, I just want to stop worrying about my own situation – because I still have a house and my kids are fine – I just want to get on with my work. While this metaphorical wrecking ball is being taken to the US, the actual wrecking ball is still pounding away at the people of Yemen, Syria, Somalia, Libya. So with my best British stiff upper lip, I will carry on. I’m doing media (BBC Farsi), writing (as you can see but also articles) and planning to advocate for UK/EU/Canadian etc. diplomats to grow some backbone and stand up for decency.

Day 9
The self-censorship is creeping in – but I’m resisting. We heard they’re checking people’s Facebook and social media to see what views they hold. We’ve heard of bank accounts being frozen until further notice, of people kicked off of planes, and of detentions with no end.

Hard to believe it’s just been two days since that insane Executive Order was passed. You’ve all read about the chaos at the airports, the heroic lawyers and judges, the incredible public turnout and the very cool New York Taxi drivers. Meanwhile all this public pressure has had its effects. As dual citizens, we saw Captain Canada coming to the rescue first. Trudeau’s statement in support of Canadian dual citizens put others to shame. Marvellous Merkel took her stand, followed by a watery statement by Boris, which finally this evening turned into a formal press release. So as of tonight, as Green Card holders we’re seeing signs that our legal status offers some protection, though it’s always couched in a ‘kinda sorta depends on the immigration officer’ way.

But with all this still going on, do we feel safe and secure? No. That is the categorical answer. Something broke on Friday and it’s not going to be fixed so easily. Every Persian friend I speak to has had the same reaction. We’ve been transported to the darkest days of our childhood and adolescence. Years punctuated with feelings of loss of home and lives we knew, separation from family; uncertainty and insecurity that wheedles its way into your psyche, burrows in, never leaves, and has suddenly woken up. We are once again at the mercy of ideologues and incompetents. Trita Parsi wrote that the hourly changes in policy were reminiscent of a Banana Republic. My own sense is that Bananas have taken over the Republic. Or as another friend said, it’s like when the Penguins took over the cockpit of the flight in Madagascar.

The hardest part is that normalcy prevails around us. Most people were doing what they do on a Sunday in DC or around the country. These issues do not affect them. Many do not care, others are supportive. This is what it was like in 1979 for some of us. In our small circles we heard of people being arrested, homes lost, property expropriated, families separated. But to most Iranians, these were invisible stories. I imagine in the US today it is much the same. Hundreds floundering in detention, while millions go to the movies and shop at Macy’s, ‘cos there’s a 60% discount – so hurry!

Of course thanks to the noisy airport protests and uproar in social media, the mainstream shows covered the stories today. But it was telling that so few of the experts and commentators were representatives of the communities affected. So many educated, erudite Persians, Iraqis, Syrians, Somalis, Libyans, Sudanese, Yemenis are here, yet so very few are on our screens, given the chance to speak for themselves. It is a form of modern day colonialism – to be spoken for, to be muted and invisible.

And since the 1970s is my decade du jour, perhaps it’s apt to end with the lyrics of the great Fleetwood Mac… ‘Don’t stop thinkin’ bout tomorrow’, it’ll soon be here. Yesterday’s gone, yesterday’s gone.’ As a hip nine year old (my peak of hipness btw) I used to sing this on Thursday nights in full anticipation of a fun day in Poonak (country side in those days) on Fridays with my cousins. Tonight it has more ominous tones.