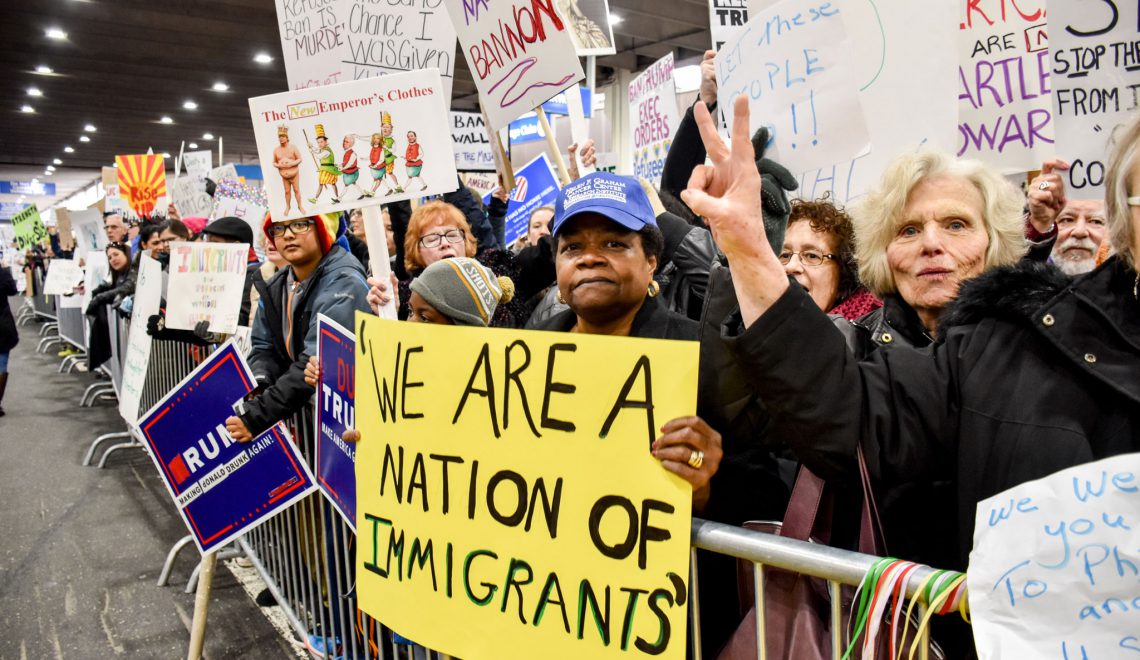 Day 10
And on the 10th day in the age of Trump… I lost my capacity to write a sentence or saying anything without swearing. Exhaustion is creeping in. Also it’s Monday and reality TV life has to give in to real life.

To be fair, when the acting Attorney General says that her own government lawyers should not defend the Presidential Executive Order in courts where they are facing the heroic independent judiciary, the only term to describe the situation is an almighty ‘clusterf*ck’. If that’s not enough, tonight it took on a mudwrestling tone, as Trump fired the AG for her order. Meanwhile, back in the cockpit, the penguins and bananas were having a go at each other. Trump put his extreme-right hand man Bannon on the National Security Council while demoting the military chief of staff from that same council. Trump supporters out there: I hope you’re sleeping well knowing that a dingbat fascist is running the National Security Council of the United States. No wonder pictures of a smiling Kim Jong Un were circulating with the caption I’m not the craziest leader anymore.

Our minds are boggling in unison, even though it was a relatively quiet day compared to tomorrow, when they’ll announce the next Supreme Court Judge.

But enough of the chaos, let’s talk about silver linings. First off, it turns out that the vast majority of volunteer lawyers helping out detainees at airports are young women. Yay ladies! As the battle lines are drawn, the choice is between the old greying angry white guys spewing chaos and hate versus the young, oh so joyous, colourful and innately inclusive, post-racial women (and their fabulous good guys.) It’s also notable that the super hero of the weekend was Judge Ann Donnelly, and that the newly-fired AG is also a woman. Though hats off to Captain Canada for leading the international charge.

Second let’s talk about Persian heritage. I bet many of you will relate when I say that there have been moments these days, when we silently harumphed and wondered why we had to be Iranian – to be going through this kind of crap AGAIN. As if the troubles we face are sourced at birth. I realize how easy it is to self-hate or somehow try to distance ourselves from the issues. As if our Anglicization, Francophication or whatever it is that happens when we’re immersed in other cultures can trump (sorry for the pun) and erase our Persian identity and make us assimilate to the point of denial. But don’t do it folks. The worst thing we can do is to allow others to determine our history and heritage for us. By ‘others’ I mean the extremities on both sides. To be Iranian is to be Muslim, Baha’i, Christian and Jew – faithful and faithless. It is to be black, white and dark-white; blue-eyed and doe-eyed; poetry loving and political. Calling the Executive Order the ‘Muslim Ban’ is denying this pluralism. So I’m glad that so many people coming out proudly proclaiming their identity – as if our diversity, normalcy and success is itself an affront to the bigots who want to beard and box us with warning signs. Well forget it.

Meanwhile back at the open prison ranch, we are getting some reprieve. The latest is that Green Card holders can venture a toe out the country and slip it back in. My sister and I are testing the limits next week – she’ll travel to the US on a UK passport with a visa, and I’ll travel to Europe. We’re both contrarians thanks to our dad’s DNA. Say ‘you can’t do’ and we’ll move mountains and say ‘just watch me’.

So on that upbeat note, I say goodnight. I’m drooping but I’m still standing… and clearly not shutting up.

Dear God, it’s been 11 days and it’s not over yet. So I’m back for a dose of group therapy. Be warned, tonight’s post may make you laugh, cry and explain why head-banging is the only viable form of expression henceforth

First off, the laugh and the cry: I write at the hour at which, 16 years ago on February 1 2001, the most extraordinary bundles arrived in my life, and have continued to awe me ever since. So in honour of my babies’ birthday, and to embarrass them this one last time, and to make us laugh and weep for all the reasons we know, I’m posting herewith their tribute back in 2008 to the last true American president – one Barack Obama.

Now to the insanities of the day. For my Iranian friends I recommend you put on your ski or bike helmets to read this next bit – for the dose of head banging that is likely to ensue. It turns out that amidst the chaotic events, with Iranians in detention at airports around the country, and with pleas for help for Farsi interpreters for travellers, the self-proclaimed princeling of Potomac – Agh’Reza Pahlavi – decided to roll up his sleeves and jump right in there to answer the call of his compatriots. Wow! You think – did he of widening girth drive into Dulles and offer his services for free? Did he use his platform, megaphone and access to congress and the media to denounce the ban? Uh, no, nyet, nein and non!

The greying man, with delusions of grandeur gives an interview to… Breitbart!!! Yes, that well-known right-of-fascist outlet, praising the new US president and making a pitch for a Free Iran, which we know is code for ‘reigning’ down chaos on the heads of Iranians back in Iran, because Agha Reza wants Iranians to ‘break free’. It reminds me of that lovely song by the fabulous late great Freddie Mercury – ‘I want to break free’. But Freddie, being the genius he was, got it all so right: ‘I want to break free, I want to break free from your lies, you’re so self-satisfied, I don’t need you’ – Applicable to so many cases around us these days. Where to start?

Back to Reza: talk about poor bloody judgement. Just think about it for a moment. He’s telling a fascist site that he’s willing to be a puppet and serve Iran up on a platter to this new American regime, all so that he can take over. Does he know nothing of our history? To those of my esteemed friends who are experts in biogenetics: are opportunism, a penchant for fascism and thick-headedness detectable in DNA?

Meanwhile the march of the GOPenguins continues full blast. As the erroneously termed ‘Muslim Ban’ debacle continues, Donald Trump has seated a next Supreme Court judge who’s a bit judgy when it comes to minor things like women’s control over their own bodies.

Then in Congress, the people’s representatives were having a particularly busy day unravelling the greatness of America. A new bill was introduced proposing to sell off 3.3 million acres of Federal National Park land!

National parks – it makes you weep. Why? You know – we just don’t have enough strip malls and soulless exurbias in this country. I’d like to know if they’ve stitched up the sales already or if we can pitch in together and buy some of it? Seriously.

If that wasn’t enough, another bill, introduced on a casual basis, but this time with ominous overtones was HJ Res 10 authorizing a pre-emptive war against Iran. WHAT? Yep, it’s there in case we kinda sorta maybe think that they might, kinda sorta maybe use a nuclear weapon, which they don’t have. But that’s not the point, is it? And if you thought these stupidities are only because of the Penguins going bananas – you’d be wrong. This last ludicrous bill to declare another war in the Middle East comes from our democratic friend from Florida, Alcee Hastings. I mean seriously, WTF?

So how to make sense of all this? Well, imagine we’re all high up on a massive rollercoaster, the bestest and biggest in the world, and it’s damn cool, and it’s the ride everyone wants to get on, so the lines are long and the butterflies in tummies are fluttering. Anyway, you’re up there, the sun’s been shining, we’ve been whooping and laughing, and now we’re at the summit, knowing that it’s a steep fast swoosh down. You adjust your seatbelt, the adrenaline kicks in, and you anticipate the rush – but you know – I mean you really do know – that it’s all going to be OK. Because it always is – the rules of engagement, the maintenance of systems, checks and balances all work like clockwork and the people running the show are consummate professionals. So, as the wheels crank up, you grab the sides with your knuckles going white – and for an instant you take a peek down below.

Suddenly the horror sets in. The pros are gone, the guy manning the station is gone, and his supervisor is out to lunch. A bunch of thugs (or penguins, your choice) are unscrewing the nuts and bolts, while another bunch is readying a wrecking ball to slam into the scaffolding of the rollercoaster. That, my friends, is where we are now.

You pray and protest hoping to draw attention to that damn ball, But the folks who can and should get out – are sending you emails asking for money (yes Donna Brazile and the Democrats, I’m talking to you).

America is America because of the core values it stands for: Equality and Justice for all, and a welcome for all. It has sustained itself by virtue of the institutions and laws that uphold those values, put them in practice and ensured that we have a critical mass of people with a democratic mindset in our midst. The Executive Order barring nationals of seven countries from the US and pulling their Green Cards from their wallets is the unravelling of those laws. The false argument of National Security is a virus unleashed through the media into our institutions to corrupt our core values and de-sensitize us.

Here’s one last thought: Since Friday, America’s most vulnerable populations have been at the forefront of fighting for America’s most fundamental values.