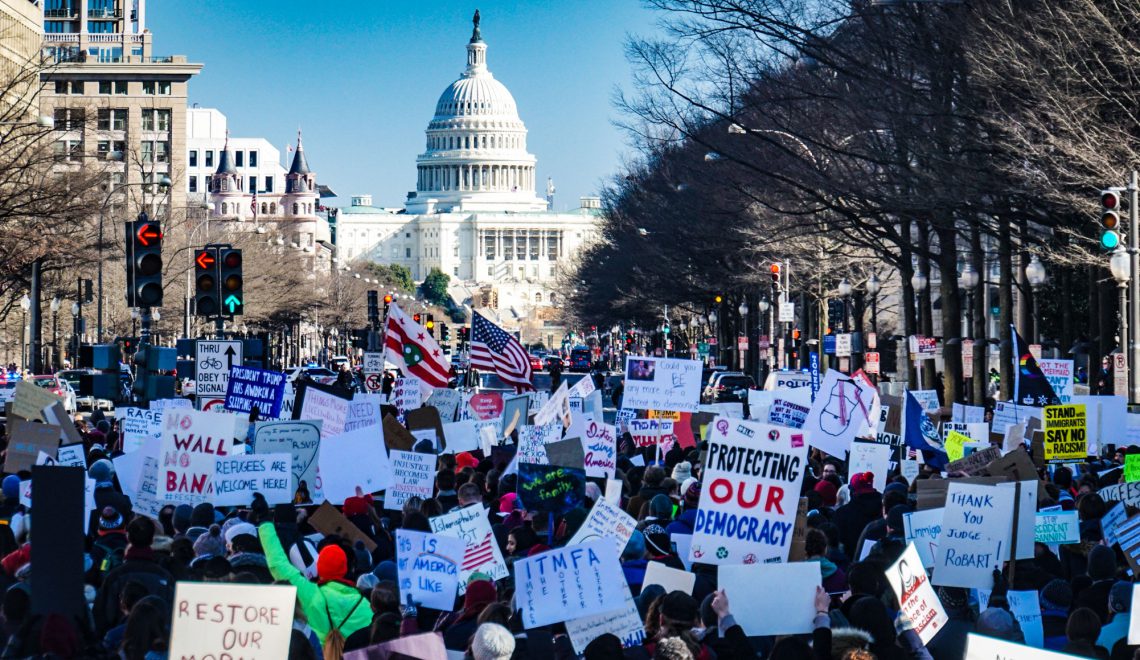 The age of Trump

Sanam Naraghi-Anderlini has been journaling events following the accession of Donald Trump to the Presidency.

Day 6
Today, the madman in the White House signed an order that could mean that next time outside the US they could bar me from entry on my return because I’m a legal, taxpaying resident of the United States who happens to have been born in Iran, who carries a UK passport and has not become a US citizen. Read more here.

Day 7
America has finally had its heart ripped out. The Executive Order is out, folks, and it’s worse than many imagined, despite all of the calls to Congress. On Twitter we are being told that as Green Card holders we should not leave the US. Read more here.

Day 8
Today, the question has been ‘how do you main normalcy when all of a sudden you feel like you’re in a vast open prison?’ My apologies to my American friends and to this stunning country for this analogy, but the freedom of movement has always been in my spirit. Read more here.

Day 9
Self-censorship is creeping in – but I’m resisting. We’ve heard they’re checking people’s Facebook and social media to see what views they hold. We’ve heard of bank accounts being frozen until further notice, of people kicked off planes, of detentions with no end. Read more here.

Day 10
On the 10th day in the age of Trump…I lost my capacity for writing a sentence or saying anything without swearing. Exhaustion creeping in. Read more here.

Day 11
Dear God, it’s been 11 days and it’s not over yet. Be warned tonight’s post may make you laugh, cry and explain why headbanging is the only viable form of expression henceforth. Read more here.

Day 13
It’s day 13 in the age of You Know Who, and the partridges in the pear trees have gone home or been eaten, but the damn bananas are still running the republic. Mr. Bannon talks about war as if it were a natural phenomenon. This narrative is deliberate, because they want to make it seem inevitable – so that the ‘inevitable’ becomes the inevitable. Read more here.

Day 15
Day 15 in the realm of President no.45. From every direction the messages are the same – ‘be careful what you say, what you post’; ‘don’t travel, or if you do clean out your social media’. They are logical, responsible statements. Caring advice for sure. Read more here.

Day 17
Today I made the uncomfortable decision to cancel a work trip to Germany. I was invited as a member of the UN Volunteers Experts Group to help plan the global report on Volunteerism. Read more here.

Day 18
Where do we start tonight – a whip (no pun intended) around Russia to discuss the legislation that decriminalizes violence in the home. They make a distinction between being beaten bloody and having your bones cracked – yup, in 2017. Next, onto Afghanistan where the Taliban are blowing their own countrymen to smithereens because some Wahhabi mullah told them they’d make it into heaven. Read more here.

Day 20
Day 20 in the age of Bannon, and finally we see the dawn light. Today three people chose to act in such a way that they eased the lives of millions across the United States and the Magnificent Seven other countries, and saved the lives of many among them. Read more here.

Day 24
Day 24 in the age of T. I’m conflicted tonight. I’d really like to just share this extraordinary story of two Americans who came to Iran decades ago and started two international schools. Mr. and Mrs Irvine who are celebrating seven decades of marriage. Read more here.

Day 32
Day 32 in the Age of no.45 – I’ll be honest, a certain numbness is creeping in. Maybe it’s do with this perpetual sense of holding one’s breath, wondering what’s coming next. A little too little oxygen getting around my middle-aged (I’m in denial) veins. Read more here.

Day 44
I imagine some of you are grateful for my long absence. I’m back, so apologies for the meanderings below. My silence was due to travel and closing Facebook for all those nonsensical security concerns, then forgetting my password and panicking about what I’d do if they asked for the password at the border. For the record, I decided I would not be complicit in my own censorship. Read more here.

Day 50
Day 50 in the age of extremism – and it goes on. We look for moments of light and hope. We also create them, and remind ourselves of the goodness that does exist. Tomorrow in New York as the Commission on the Status of Women commences, so much of what is good in the world will be at the UN. Women from all over the world, who care and dare. They should be on our TV screens 24/7. Read more here.

Day 58
Day 58 in the age of 45 – and it is an auspicious night. Tomorrow is Nowruz, the ancient Persian New Year, celebration of the first day of Spring, of life and light and colour. Read more here.

Day 62
Yesterday my London was attacked. Why and who is still unknown. But the ‘how’ was plain for all to see. We are in the age of extremism – and that means entrepreneurial terrorism is a feature of our lives. One man – so often they are men – shattering the lives of so many for some false personal belief. Read more here.

Day 101
I’ve been procrastinating on writing this one. What is there to say? We are alive. That’s good. That we have to pause and be grateful for being alive is not so good. In 2017, we should be able to take peace and life as a baseline rather than an achievement. Read more here.

Day 108
Day 108 in the Age of …what? Extremism? For sure! Madness? Indeed! Topsy turviness? Yes, I’ll go with that one too. Unlike TV soap operas, I cannot give you snippets of the story so far. So many things are going awry that it’s hard to keep up. Read more here.