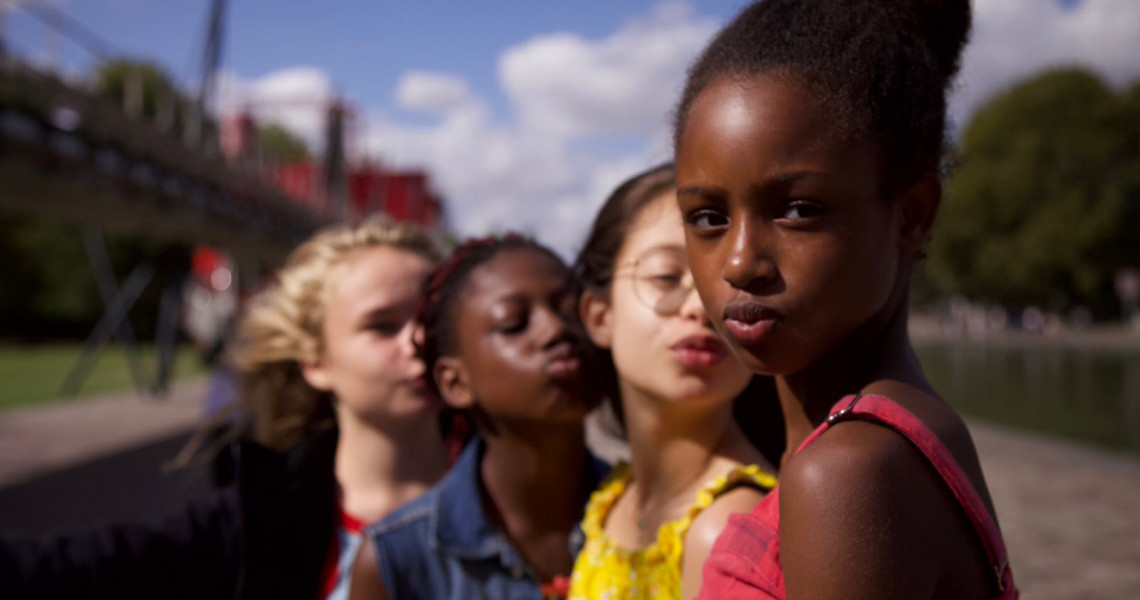 The Netflix original film Cuties (2020), centres upon a group of eleven-year-old girls forging their nascent pubescent identities, and gaining validation from sources ranging from Instagram likes to the approval of dance judges in a competition. Cuties is not cute at all; rather, it is more akin to a body horror film. Things are not as they should be: daisy-duke gyrations on-screen are attached to the little girls’ heads. The film is harrowing, because it is in fact trying to do something squirmingly honest, and, as is evident through the calls of the cancel culture cavalry, perhaps it is honest to a fault.

Not many films leave me clutching invisible pearls around my neck, and if they do, I swear you can see the reflective glint of smugly grinning male auteurs in them. First-time Franco-Senegalese director Maïmouna Doucouré, however, is not smug at all. She is honest, and at times nuanced, which only makes the provocative nature of the childhood sexualisation more difficult. Doucouré writes that the film was borne out of a process where she interviewed eleven to twelve-year-old girls and found that they equated likes for pouting on TikTok with self-esteem. Contrary to the images of this film as pure sensationalism, there is care in this honesty.

Set in France, the film centres mainly around the eleven-year old character Amy (Fathia Youssouf), originally an outcast due to her Senagalese Muslim roots. This situates her in opposition to a group of ‘cool’ girls in her class, all part of a self-formed amateur dance group called the ‘Cuties’. Amy’s home is an encapsulation of traumatic feminine rituals and the male-imposed systemic trauma attached to them. She acts like a mother and teacher to her little brother Ismael (Demba Diaw), as her own mother, played brilliantly by Maimouna Gueye, suffers with awful marriage problems. Her community imam states, rather tritely, that these are burdens that she can bear as a woman. Amy’s household consists of women bent to breakage point, so it is no wonder that she herself tries to bust out of the conservative nature of her traditionalist household. This escape largely comes in the form of  twerking in front of the camera.

After watching the amateur girl dance group practice near the train tracks, she steals a smartphone from an older male cousin. Through his screen, she finds a form of empowerment in the emulation of  ‘liked’ images of older, sexually liberated women. She emulates their self-presentation to gain ‘likes’, validation, and confidence in herself.

This film joins in the conversation about whether women being sexual online can really do so on their own terms, when the space to be reclaimed is male-oriented – through its profit motive and through its male gaze. This is a conversation which flares up in waves, most recently with Cardi B and Meghan Dee Stallion’s ‘WAP’ video, as opposing camps debated whether their overt sexual performance was feminist, or simply enabled the male gaze’s hypersexualised idea of women. Doucouré focuses this conversation upon younger girls, where the stakes are much higher. Coincidentally, and prophetically, there is a scene where the ‘Cuties’ dance the hybrid infantile-sexual ‘crybaby’ move on stage, a move which is used in the now viral TikTok dance challenge for ‘WAP’. Some men in the audience nod their predatory, enabling heads; women groan and shield their young children’s eyes.

Dancing and viral fame is the glitter eyeshadow of hope for these girls, but the residue is tear-streaked sexual exploitation, and the enablement of predators. The film comments on how glamour and freedom for young women in this screen-mediated world can be heartbreaking. Women exist and work within systems of oppression. What is so jarring about Cuties is that it is not showing young women grappling with the dichotomies between sexual freedom and exploitation, but young girls.

Amy’s Muslim household, signified through her mother’s close-knit Muslim Senegalese community, is contrasted with Amy’s confusing relationship with sexuality, puberty and her steps toward the role of womanhood. There is one, deeply uncomfortable, moment where these oppositions rub together like sandpaper, and a few other uncomfortable moments which stick. Similarly, shots of the girls dancing as if in a music video felt overlong and gratuitous. To critique this film too heavily, however, is, in my opinion, a way to offload some of the discomfort I felt as a spectator. But this discomfort feels necessary to spark the conversation Doucouré wants us to join. The film may not be for everyone, particularly those who may have experienced childhood exploitation themselves. However, for the rest of us, it may spark conversations that could not occur within cancel culture.