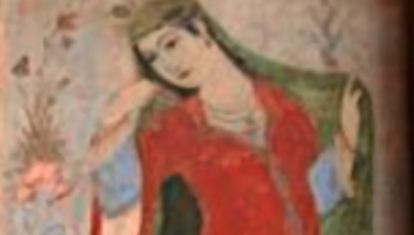 Aisha al-Manoubia, also known as Lalla Manoubia, was a Berber woman who rose to become the highest authority on Sufism in Tunisia. She was considered one of the four spiritual guardians of the capital city Tunis. Aisha was born in the village of Manoubia, around four miles from Tunis, either in 1190-1 or 1198. Her father was a local sheikh and her grandfather had performed the Hajj pilgrimage. Manoubia was a fertile farming community, close to the city of Bardo, where the royal family owned a lavish palace.

At the time, Tunisia was ruled by the Berber Hafsid dynasty as part of a region of North Africa known as Ifriqiya which was comprised of Tunisia and parts of what is now Libya and Algeria. From a very young age, she was instructed in the Qur’an by her father, and from the age of nine, she chose to pray and meditate in solitude. She also refused to wear a veil. Her beauty and refusal to cover her hair attracted attention from the young men of the village, and soon rumours began to spread about her morality. Her father attempted to quash them by arranging a marriage with her cousin. Most accounts of her life state that at this point, she left home and set out for Tunis to escape the marriage. More fanciful accounts, however, state that she killed her suitor with a poisoned arrow, which caused him to die in agony, or that she married him, but made his life such a misery that he divorced her. Whatever the events around the marriage, the consensus is that she left her family, chose celibacy over married life and maternity, and dedicated her life to studying science, supporting women’s rights, and spreading Sufi understandings of Islam. According to folklore, she was even capable of performing miracles. She is credited with slaughtering the family bull, distributing its meat to the villagers, and then restoring it to life.

She first began to support herself in Tunis as a single woman through spinning and knitting. From her arrival in the city, she frequented a mosque popular with the Sufi order. She also studied the hadiths and Islamic jurisprudence. Abu Hassan al-Shadhili, a Morrocan saint and founder of the Shadhili order of Sufis lived in the community around the mosque. One hagiography of her life quotes her as saying she had met him twice, and that he had taught her about the Sufi tradition.

Even in Tunis she was found in violation of normative morality: she continued to defy the strictures on socialisation between the sexes in Islam, praying alongside men at the Al-Zaytouna Mosque. She was criticised for her refusal to marry or to restrict herself to female company, and for travelling without a male guardian. Tunis’s Qadi even sought to have her punished for immorality. Nevertheless, Aisha continued to share her teachings with both sexes, and spread religion in taverns, and other places which were not considered respectable for a woman. Here, her behaviour aligned with the Sufi practice of the purposive transgression of social norms. She also preached in the Safsafa Mosque (now a shrine) and discoursed with the Sultan, Abu Zakariya Yahya. She also made long retreats into the countryside for spiritual reflection. It was believed she had read the Qur’an 1,520 times.

She was well-known for her charity, living on the barest essentials in order to donate to people in need of her help. She is also credited with a strong sympathy for women, particularly unmarried, divorced and widowed women. It is believed that she may have bought, and freed, Tunisian slaves. She travelled widely across the region to spread Sufi teachings while offering charity to people in need. By the age of 50, her reputation as a saint had been established definitively. When Al-Shadhilli left Tunisia, he gave Aisha his cloak and ring as symbols of his authority. In an official ceremony, she was named Qutb (meaning pivot), and became the leader of the Tunisian order of Sufis, supervising the imams.

At her death, she was buried at the El Gorjani mausoleum after a ceremony involving the whole city. A district of Tunis is named after her, and many young girls have been given Manoubia as a first name in her honour. She is one of the few women who has been the subject of a biography as an Islamic saint. Her home-town built a mausoleum to commemorate her. In 2012, radical Islamists burned her shrine in an attack upon the country’s Sufi heritage. However, it has since been renovated and has reopened to the public. It is staffed by women, and is particularly popular with female visitors. Her legacy within Tunisian folk culture is very strong, where her generosity is captured in traditional songs. In 2019, for example, Tunisian women organised a festival of music and traditional culture in her honour.