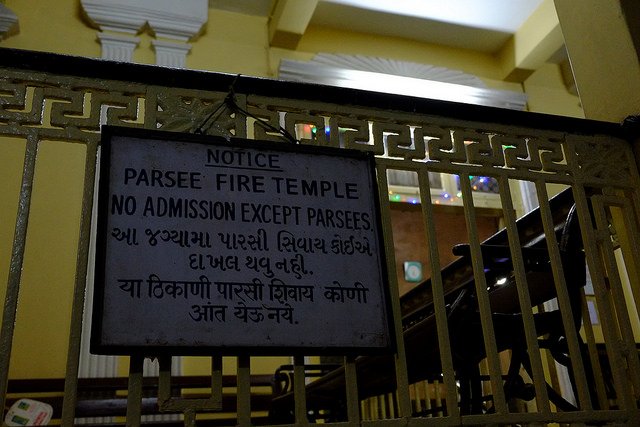 Half Parsi. Half Muslim. Full woman.

I say my date of birth, in full.

She looks up at me. I am standing in the classroom, as each of us must when the roll call reaches the letter of our surname in the alphabet. ‘How can you have two religions?’ she asks. Maybe she is smiling; maybe she isn’t. I cannot remember, because this process occurs every single year, on the first day of school after the monsoon holidays are over. ‘I don’t know’, I say, although I do. I have two parents. And two religions.

‘What is your father?’ In India, this is quite a common way of asking which religion you belong to. ‘What are you?’ begins with this classification, if your name doesn’t already ‘give you away’. ‘My father is Muslim’, I say, and watch her write it down. I protest. How young I was when I began protesting is unclear to me. All I know is that by the time I was ten I have already decided that I have had enough of my mother’s religion being erased from my identity. For that is how I perceived the act of a figure of authority deciding on my behalf that my father’s religion was the defining classification of my personhood.

I am a feminist. I came to an understanding of this word first through the writings of Alice Walker and her fulsome, inclusive definitions of womanism. But that was at university. So until then I had no words for what I felt at the thought of the denial of my mother’s religious identity. In India, this is more than the place of worship you are allowed to enter – it weaves into every aspect of life: your birthing ceremony, your childhood years, your teenage relationships, your marriage, and then the decisions that will affect the lives of your own children. My mother had a spiritual, emotional and psychological crisis when she fell in love with my father, because she had always assumed she would marry a Parsi like herself. Parsis are now a tribe, technically, because after a thousand years after leaving Persia as a result of Arab persecution, and after sheltering in India under the promise of never proselytising the religion – Zoroastrianism – we now number less than 70,000.

You notice I have only just mentioned the ‘other’ religion. Indians know that to be a Parsi is to be Zoroastrian in a way the world does not want to know that to be Muslim is to be Malaysian, Kurdish, French, Moroccan, Norwegian, Somali. Naming ‘Zoroastrianism’ has only become a reality since we moved to England. A non-reality, ultimately, because no one has heard of Zoroastrianism. Well, unless you happen to be a bona fide Freddie Mercury fan, or you are a Professor of Iranian or Avestan Studies. The Jehovah’s Witnesses who used to knock on our door heard ‘Rastafarian’ every time my mother opened the door to explain that she did have religion in her life.

What was my Parsi mother’s greatest fear when marrying my Muslim father? That her children would be neither one thing, nor the other. Where would we belong? Individually, or as a family? Nowhere, she feared. And in part, her fears proved to have substance. When her father died, the Zoroastrian priest would not permit my mother to enter the sacred area where my grandfather lay, wrapped in white muslin sheets, ready for his sky burial. She had been made impure by marrying outside the community. The pure land was no longer available to her. His cruelty broke her heart.

We make our choices. One day, when the need to visit the fire temple and light aromatic sandalwood became too great, my mother drove all of us to the agiary (fire temple). The sign outside clearly stated, ‘Only Parsis allowed.’ My father prepared to wait outside the entrance. My mother, my younger brother and I began to troop inside. One small figure was missing. My older brother, clutching our father’s arm, refused to leave his side.

We make our choices. Are you Muslim or Parsi? What is your father? When I was ten I placed the secret of my heart upon my mother’s palm. I knew no one would ever order me to prove myself a Muslim. If they did, couldn’t I simply burst into my favourite surah, ‘Alam Nashrah Laka Sadrak’? Hadn’t my mother painstakingly taught herself Arabic so she could in turn teach us the calligraphy that would forever be written upon the scripts of our souls? Secure in my Islamic and Arabic traditions, I wanted to ensure my Persian Avestan traditions. But the formal investiture was time-conditional. Parsi girls may only enter the Zoroastrian faith through the navjote ceremony before we begin to menstruate. Oh, that gatekeeping, so beloved to the male priestly communities across the globe, across time. Blood, the river of life, which runs free through all human veins regardless of gender, suddenly turns into such filth that God himself would forsake us when it is associated with women. He would be Himself here. Herself would merely commiserate over the monotonous banalities, send waves of abdominal healing and draw us ever closer.

It didn’t make much difference; and it made all the difference in the world. My Parsi-ness, my Zoroastrianism, remains invisible: the secret I placed upon my mother’s palm remains the secret of my heart. My delightful father, who I worried would feel betrayed by my deliberate choice, was only moved to tears that his daughter felt so deeply about her relationship to the liminal, the mystical unseen ever-thereness of the spiritual world. I pray, as he does, in surahs and in gathas. A thousand years ago, his people may have persecuted my mother’s people. In me, persecution will not be internalised. Love made its decision so firmly, so deeply, that surely some tiny bat squeak of an echo is even now ricocheting back in time, to press my secret into the palms of forsaken hands. Here. Remember this. Love is a choice, waiting.