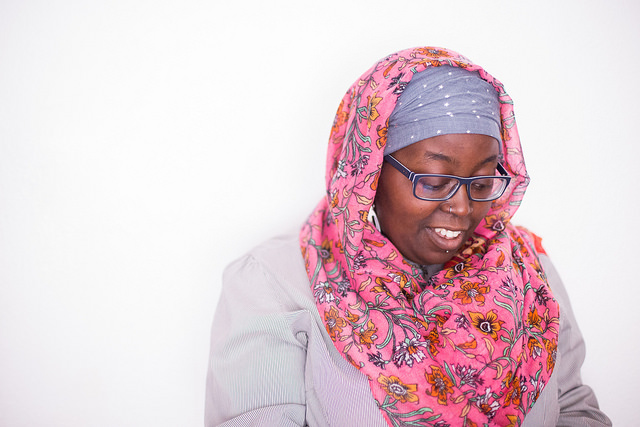 Where are the black Muslimas?

I am Muslim and black. These two words are very loaded. They are brimming with histories and experiences, pride and struggle. I have grown up as a Muslim in the 21st century being very aware that there is a discernibly skewed image of my faith, and that often many are ignorant of my practices. As a black person, questions around racism, whether direct or structural, are at the forefront of my mind. Often this is because in this current political climate I am reminded that there are many who feel that I do not belong here in the UK.

I identify myself as Muslim and black: frequently in that order. My faith, as an important part of me, will take precedence. Nevertheless, my identity as a black, Somali woman is very dear to me. I use the word ‘dear’ deliberately. I love my blackness and I love being Somali. I cherish the rich culture I come from, with its fragrant cuisine, vibrant dress and graceful but oh-so-sexy Guntino (traditional Somali wrap dress). I am proud that I come from a long line of warrior women. They are warriors because they did not allow their battles with poverty, misogyny or civil war to cripple them. Most of all, perhaps, I love how I have been bestowed with chocolate skin. I would not change my complexion for all the power or all the diamonds of the world.

Unfortunately, when I look at the media representation of Muslims, not only in Europe and America, but even within our own communities, I rarely see black Muslimas. I am left asking the question: are we invisible, or has a choice been made to not see us?

To be blatant, the public generally consider a Muslim person to come from Arab or Asian descent.  In order to understand the extent of this misconception, some geographical knowledge is necessary. Estimates by the Pew Research Centre found the Muslim worldwide population to be 1.8 billion in 2015. This figure of course includes majority Muslim nations such as Pakistan (96% Muslim population), Iran (99.4%) and Saudi Arabia (97%). When talking about Islam, these are the countries that are habitually mentioned by the media.

Just to put the issue in context; the 2009 ‘Mapping the Global Muslim Population’ study by the Pew Research Centre’s Forum on Religion and Public Life, demonstrates that countries like Mali (92.5% Muslim population), Senegal (96%), Gambia (95%) and Niger (98.6%) have very large Muslim populations. Why is this important? These are all majority Black Muslim regions, which are rarely exposed in the public eye. To add to this, I encourage you to search ‘Muslim woman’ on Google. The images are of an array of Muslimas from Arab and Asian backgrounds, the bulk of which are clad in black Abaya and possess lighter skin tones. Where are the Black Muslim Women?

There are not enough platforms created for women, particularly BME (Black and Ethnic Minority) women. This is even truer if you are Muslim. When was the last time you saw a Black Muslim woman in a senior leadership position? To add to this predicament, organisations that declare themselves to represent and further the rights of Muslims, often neglect Black Muslims. Numerous organisations, whether based in London or other cities in the UK, have staff who are exclusively composed of Muslims from Asian and Arab descent. Furthermore, out of 14 Muslim MPs elected in 2017, eight were women. All of these women were of Asian origin. I am very happy to see Muslimas in such positions. I do wonder, however, whether as elected officials, they understand the situations of black Muslims. If a Black Muslim woman stood for election to become a MP, and had the same qualifications as an Asian/Arab candidate, would Asian and Arab Muslims vote for her?

If status derived from merit, I am sure we would see more Black Muslim women like Ilhan Omar (Minnesota legislator), Malika Bilal (broadcast journalist), Warsan Shire (poet) and Ibtihaj Muhammad (Olympic medallist fencer) in the public eye. Colourism is defined by the Oxford Dictionary as the ‘prejudice or discrimination against individuals with a dark skin tone, typically among people of the same ethnic or racial group’ and as much as we can point fingers towards those that hold the privileges of whiteness and wealth, let us be honest and examine how Muslim communities operate as well. The problem is in the definition itself. Colourism tends to occur within communities, and although this should not be taking place amongst Muslims, we are very guilty of this. As an African I know that lighter skin is still considered a sought-after trait. In some Somali circles the term ‘cade,’ which has its root in the word ‘cad’ (white), is used affectionately towards children and spouses as synonyms for the words ‘darling’, ‘dear’ or ‘sweetie’. Asian and Arab Muslimas also face this difficulty. Many use lightening creams to gain a fairer complexion.

Growing up in London in the mid to late 90s and early 00s, I remember liking gymnastics. I didn’t see anyone that looked like me in the sport, so eventually I quit. It is not so farfetched to think that young Black Muslims are not going for positions of power, whether in their community or not, because they do not see anyone that looks like them in such positions. We are now in 2018. When I turn the TV on, I still don’t see anyone representing me. Even when a programme intends to have a level of representation of Muslim communities, those from African or Caribbean backgrounds are rarely included. When they are, it feels like they are presented to fill a quota or in order to play a particular stereotype, often an aggressive one. In short, not enough platforms exist for us. The spaces have not been created – so we must invent them ourselves.