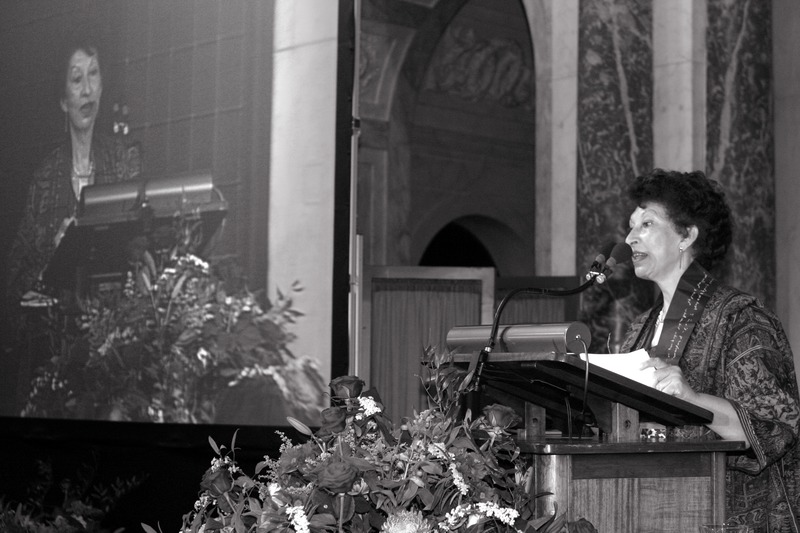 If women’s rights are a problem for some modern Muslim men, it is neither because of the Quran or the Prophet, nor the Islamic tradition, but simply because those rights conflict with the interests of a male elite… Islam was not sent from heaven to foster egotism and mediocrity. – Fatema Mernissi

Fatema Mernissi was a sociologist and professor whose books include Beyond the Veil, Islam and Democracy and Forgotten Queens of Islam. Born and raised in Fez, Morocco, Mernissi grew up in a bourgeois harem surrounded by women. The separation of men and women which characterised her early life situated her within a space occupied by powerful women who were living under severe restrictions. Her harem childhood was a formative influence upon her life and her feminism. She was constantly aware of the women’s power and male attempts to constrain it, whether this was expressed through the efforts of sequestered women to build fulfilling lives within the constraints of the harem, or the erasure of powerful Muslim women from the official histories of Islam.

Due to an increasing nationalist fervour in Morocco, developed in response to French colonialism, the education of girls was considered a tool of national liberation rather than as a source of shame as it had been previously. Thus, Mernissi was able to access education alongside boys in both national and religious schools. She studied sociology at Mohammed V University in Rabat. After graduation, she continued studying sociology along with political science at the Sorbonne in Paris, before taking PhD at Brandeis University. She then returned to Mohammed V University to teach. Her PhD formed the basis of her first and most well-known book, Beyond the Veil: Male-Female Dynamics in Modern Muslim Society which is considered a classic of cultural studies.

She was able to challenge the status of women in traditional Islam, largely escaping her feminist criticisms being interpreted as threats by conservative Muslims. Her authority stemmed from her extensive knowledge of both Islamic texts and history. This provided a basis for her to argue that the understanding of the history and teachings of Islam had been manipulated and misrepresented from its inception in order to serve male interests. This insight, together with the attempt to develop feminist and revisionist understandings of core texts, formed the core of the Islamic feminist movement. This was expressed in her work, The Veil and the Male Elite which argued for an egalitarian Islam, based upon the belief that the status and roles of women in Islam had been distorted and degraded by male elites in order to subordinate Muslim women.

Major themes in her work can be detected from her first autobiographical writing, the fictionalised memoir Dreams of Trespass: Tales of a Harem Girlhood in which sociological concerns are expressed through the voice of a young girl. Dreams of Trespass dismantled eroticised stereotypes of the harem; in the harem she describes women frustrated at their forced seclusion who channel their abilities into creating a complex woman-centred culture, ranging from theatre and story-telling to lengthy beauty practices. She also described the social structures organising the women’s lives in the harem, both those enforced by men, and the complicated and often fraught relationships between women sequestered within the harem.

Dreams of Trespass also demonstrated Mernissi’s long fascination with women’s oral traditions: the rich of culture of women which was excluded from official narratives for reasons such as illiteracy, seclusion and the low status of women in patriarchal societies. She made efforts to raise the prominence of women’s voices throughout her career. Her study Doing Daily Battle: Interviews with Moroccan Women in particular recounts interviews with working class women, recording the unexplored lives of women and their commonalities in experiencing oppression on the basis of their sex.

Mernissi proposed that the extreme efforts to control female sexuality seen in the Muslim world – including harems, veiling and legal controls – originated from a fear of the subversive power of female sexuality. She also identified that women’s stories also contained the power of subversion, encapsulated in the legend of Scheherezade. For Mernissi, the figure of Scheherezade represents the ability of women’s creative capacity to overcome male violence, since Scheherezade’s vivid and compelling stories eventually quelled the murderous desires of her husband, the Sardar. Mernissi references her in the title of Scheherezade Goes West, a collection of memoirs. This collection features the essay ‘Size Six: The Western Women’s Harem’, which critiques Western beauty standards.

Mernissi continued to criticise and comment upon current events throughout her career. Islam and Democracy: Fear of the Modern World represented her response to the devastating events and aftermath of 9/11 in which she anatomised the Islamist fear of the West and the consequent blurring of the lines between politics and religion within some Muslim states. Some of her later writing addresses the potential of IT and satellite television to reshape Arab societies well before the Arab Spring.

She was also a champion of reaching out to marginalised women, as founding member of La Caravane Civique, a group of Moroccan intellectuals dedicated to distributing books and delivering speeches to rural women. In 2003, she was awarded the Prince of Asturias Award for Letters by the government of Spain alongside Susan Sontag. Recognised as the founder of the Islamic feminist movement, Fatema Mernissi stands as an icon for a generation of feminists.