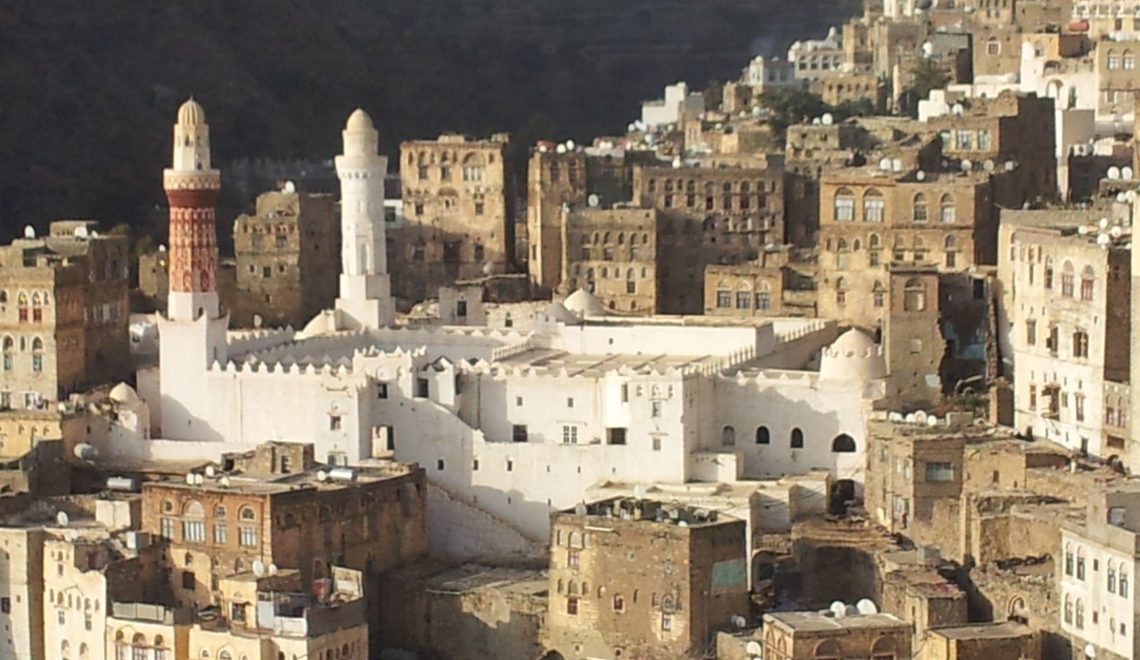 Last of the Sulayhid dynasty, Arwa al-Sulayhi was regent of Yemen for nearly forty years. Raised by her parents-in-law for the purpose of co-ruling with her husband, she became regent during his illness and continued to rule after his death.

At the time Arwa was born, the Abbasid caliphate had been pushed out of Africa, and Yemen was independent. Yemen was more fertile than the rest of Arabia, and a trading centre at a maritime crossroads. As part of the Spice Road linking Europe with the Horn of Africa, Yemen was a valuable territory. Awra’s uncle and foster father, Ali al-Sulayhi embarked upon a personal campaign to control Yemen. Al-Sulayhi had long hidden his affiliation to Ismaili Shi’ism. After he assumed control of Yemen, however, he established connections with the Shi’ite Fatimid Empire in Egypt. He married his cousin Asma who would act as an active partner in his rule of Yemen. She was the first female leader to be honoured as such in Friday prayers – an unprecedented move in a society in which women were often confined to domestic roles.

Arwa herself was born soon after the couple ascended to power. She had been orphaned at a young age. She was sent to live in the royal household and grew up receiving training in statecraft, intended to fit her for the role of wife to their son Al-Mukarram Ahmad. Their marriage took place in 1066, when she was 18 years of age.

The next year, Ali al-Sulayhi conducted a Hajj caravan of a thousand horsemen and Yemeni princes to Mecca, leaving his son on the throne in his absence. On this journey Ali al-Sulayhi was assassinated by Said al-Ahwal of the Najahid dynasty, whose father al-Sulayhi had had assassinated in 1060. The Najahids (a slave dynasty founded in Zubid in western Yemen) slaughtered the pilgrims – including most of the al-Sulayhi family – and imprisoned Asma al-Sulayhi. They placed her in a prison cell with a window opening upon the spectacle of her late husband’s head mounted on a pike.

A year later, al-Mukarram Ahmad learned of his father’s death and his mothers’ imprisonment. He stormed Zubid with 3,000 cavalrymen. The raid was successful, and Asma was rescued. However the strain of the campaign left al-Mukarram paralysed, potentially due to a pre-existing condition. Nevertheless, he succeeded to the throne with the support of the Fatimids, with his mother acting as regent. Arwa was recruited to assist her mother-in-law in dealing with the affairs of state. Al-Mukarram removed himself from public life. Arwa was generally accepted as the de facto ruler of Yemen, receiving the sobriquet Sayeeda Hurra (meaning independent noblewoman).

The Najahids had been making incursions into the territories captured by Ali al-Sulayhi, and in response – and likely with a desire for revenge for the death of her father-in-law and the maltreatment of her mother-in-law – Arwa determined upon a strategy to defeat them. She started rumours of disloyalty within her court to give the impression she was losing control of her realm, and moved her capital from Sana’a to Jibla, which was closer to the Najahids base. From here, she launched a campaign of conquest to retake former territories. Sa’id ibn Najar was killed and his wife captured. In a grisly act of revenge Arwa made sure that Najar’s head was visible from the wife’s prison, mounted on a pike.

In 1092, al-Mukarram finally succumbed to his illness. Arwa, anxious about a succession crisis, attempted to conceal his death and to establish her rule in place of her own infant son. The Fatimid caliphates sent envoys from Cairo urging her to remarry so that Yemen would have an adult male leader. Her husband’s cousin, Sabah ibn Ahmad, was said to have been designated heir by al-Mukurram. He was thus justified as an appropriate spouse for Arwa, particularly after the death of her sons. After some dispute – including failing to attend her planned wedding – she went forward with the marriage, although it is likely to be have been an entirely political union. Notably, she did not lose political control over Yemen. Sabah commanded the military while Arwa remained in charge of the affairs of court. Sabah died when Arwa was in her early 50s. There were no further demands for her to remarry.

However, the al-Sulayhi dynasty was entering into a period decline: Sana’a was lost to a tribal leader, who declared himself Sultan. Crusader forces established themselves in Jerusalem in 1099; the Fatimids were engaged in conflicts in Ramla and Syria, and largely distracted from Yemen’s affairs. The Fatimid Caliph sent an emissary – Ibn Najib al-Dawla – to take over Yemen and defend the region. He fomented an uprising against Arwa. She resisted easily with support from all the emirs of her territories. He was drowned – supposedly accidentally – by the captain of the ship conducting him back to Egypt.

Perhaps in retaliation for the Caliph’s lack of faith in her capacity to rule, she supported the Tayyibi faction during the Fatimid succession crisis. As the acknowledged leader of this faction, she was effectively the founder of the Tayyibi Ismaili sect. According to Tayyibi tradition, she harboured the would-be leader in her palace in Jibla.

In Jibla, she repurposed the palace of Dar Al-‘Ezz into a mosque while it was still under construction. This building – Queen Arwa Mosque – was to become her burial site and is now one of the oldest mosques in Yemen and a UNESCO world heritage site. She died in 1138 outliving all her children, having served as a popular and beloved Queen regent of Yemen for close to 40 years. She was described as ‘a Yemeni woman who held fast to her principles, loved her people and was faithful to them’ and one who benefited her country hugely through leaving ‘monuments, buildings, roads, mosques – far more things than a long period of power by the imams was able to accumulate.’