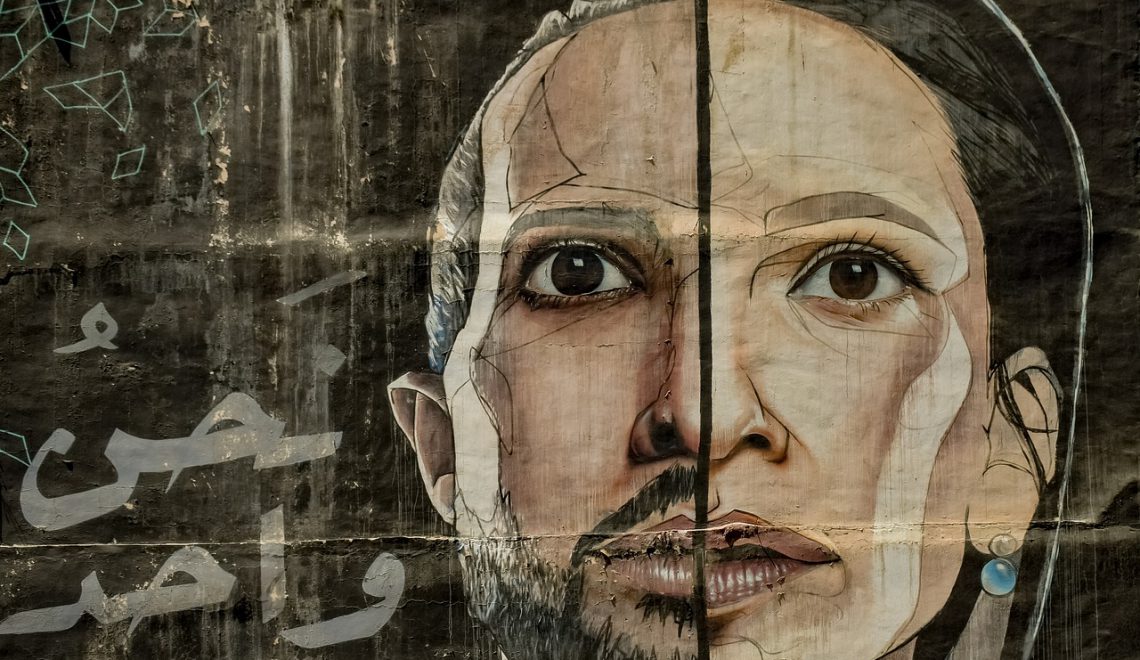 Last year, the renowned Egyptian singer/musician/actor Ahmed Fahmi shared his misogynistic beliefs in a TV interview. Fahmi believes that a woman can have all the dreams and ambitions she wants – as long as they are approved by her man. He believes that women should obey their men; that this is the least they owe to them. According to him, women have to persuade their man without telling them what they must or must not do. He is known for his extreme jealousy, and for controlling of his wife. He repeatedly justifies himself by saying ‘I am a Middle Eastern man.’ He justifies his misogyny by defending his comments as personal life choices made by him and his wife. He says that he does not impose his personal beliefs on others. However, he does sometimes speak about men and women’s roles in general – not just in his own relationship with his wife. Regardless of whether or not a person is imposing his/her beliefs on others, an ideology that rests on domination and hostility towards an entire group of people is not a protected personal choice, and it definitely not a sacred cultural trait.

Fahmi is not an exception. He is definitely not the only celebrity (or non-celebrity) to attribute his misogynistic positions to ‘Middle Eastern’ customs and traditions. Other male celebrities have explicitly announced in the media their absolute rejection to the thought of their wives and daughters entering show business. Among them are the singer Rami Jamal, the actor Maged El Masri who declared that he is ‘excessively Middle Eastern’, and Amr Mustafa who also said that he rejects the thought of his wife working at all. I cannot possibly count the numbers of discussions I have had with Arab men who hold sexist views and who defend their misogyny as cultural norms and traditions. Eventually, they shrug and proclaim ‘I am a Middle Eastern man.’

In predominantly patriarchal societies, men are moulded into being extremely jealous, often possessive and controlling. They are expected to be the head of the household: demanding, tough, and overprotective. Statistics show that men’s views about women’s roles and rights are often sexist. A 2017 study was conducted to capture views on women’s roles in the home, workplace, and public life in Egypt, Morocco, Lebanon, and Palestine. The majority of male respondents held sexist attitudes, strongly agreeing with the view that women are not fit to hold leadership roles, that women should not work outside the home, and that it is more important to educate boys than girls.

Sexism as an ideology and patriarchy as a system are defended as integral parts of sacred traditions, culture, customs, etc. Most men of the region, especially those who are sexist and misogynist, don’t see anything wrong with obsessive jealousy, male control of women, gender stereotyping, oppression, and so forth, because according to them, they are products of their own culture which must always be respected and followed. Those men (and those women who defend sexism and the patriarchal system) act as if this were just their nature, and how society has shaped them. Defiant women are at fault for rejecting social norms and for not knowing how to deal with Middle Eastern men.

It is absolutely crucial to call things with their real names. Patriarchy has been defined by many scholars in many different ways. Most notably, Moghadam defines patriarchy as ‘…a kinship-ordered social structure with strictly defined sex roles in which women are subordinated to men.’ In more traditional societies, Moghadam uses the term to denote ‘the specific gender arrangements based on patrilocal residence and patrilineal descent.’ Sylvia Walby defines patriarchy as the ‘system of social structures, and practices in which men dominate, oppress and exploit women.’

Sexism, on the other hand, is defined by philosopher Kate Manne in her book Down Girl as ‘the ideology that supports patriarchal social relations’ whereas ‘misogyny enforces it when there’s a threat of that system going away.’ Essentially, patriarchal social norms are supported by sexist ideology and reinforced by misogynistic practices. These defended as sacred cultural norms and traditions. Men from that region with that mentality have a sense of entitlement to control and dominate women. They find an easy and plausible justification in claiming that they are merely abiding by societal norms. But justifications based in a set of uncontested traditions or cultural norms to justify a practice are lazy and unintellectual. Using those traditions and norms to justify the dominance of one group over another on the basis of sex and gender justifies the unjustifiable.

The domination of one group over another should never be culturally acceptable. It definitely should not be dismissed as a cultural practice. It is time that things are called by their true names as a first step towards fighting these disgusting social structures that have been protected by uncontested cultural norms and traditions forever. The belief that men have the right to dominate and control women is sexism. Objectifying and controlling women is sexism. Stereotyping on the basis of sex is sexism. Banning women from their right to education or work is sexism. None of these are intrinsic traits of a Middle Easterner: they are the traits of a sexist.