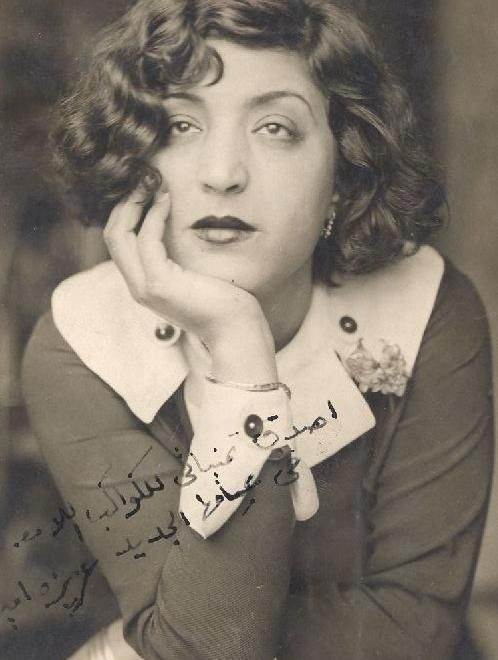 Aziza Amir was a pioneer of Egyptian cinema, creating and starring in a series of motion pictures, often melodramas.

She was born in Alexandria, as Mofida Mohamed Ghoniem, but changed her name to avoid associating her family with the still somewhat disreputable reputation of acting. Her father died when she was an infant, and the family moved to Cairo soon afterwards. Rumours circulated that she secretly married a politician, but if so, Aziza kept the relationship and his identity a secret throughout her life.

In 1923, on a trip to Europe, she unsuccessfully applied for a role with the Gaumont Company in Paris. She also met the film-maker D. W. Griffiths, who had directed the infamous film, Birth of a Nation. It is claimed that he even offered her a part in one of his films. From 1925, she appeared with a number of theatrical troupes in Egypt, with support from millionaire stockbroker patron Elie Derie. Later, she sent in her picture to a theatre company, refusing to debut in anything less than the leading role. The director was sufficiently impressed by her bravado to comply. This was the point rat which she took on the stage name Aziza Amir – and became the highest paid actress in Egypt. She appeared in plays with titles as varied as Japanese Honour, The African Lion and Miss Potato.

She married a wealthy young man called Ahmed al Sherei. He had become entranced by her performance in the play Napoleonette. In order to get married, he had to defy his family and deal with harassment from the public for marrying a woman who was considered immoral. Whilst recovering from an illness, Aziza watched movies on a projector bought for her by her husband. At this point, she developed an ambition to act in movies rather than on the stage.

Together the couple established Isis Film, a movie production company. Their first film was initially directed by the eccentric art director Wedad Orif, but her friends panned the first cut. She replaced Orfi with Stephan Rosti, and called a friend in to rewrite the script. The story centres on a country girl who falls for a tour guide, who deserts her for an American tourist. The original ending was changed to change the arc of the film from tragedy to romance in response to audience feedback. The resultant movie, Layla, was a hugely successful melodrama, considered the first Egyptian feature film. Its release in November 1927 marks the birth of Egyptian cinema. The film was hugely successful, expressing a distinctive Egyptian identity, including belly-dancing, which spoke to the nationalist sentiments building in the country following the declaration of independence in 1922.

Silent acting has finally been born in Egypt. In the Egyptian sky a shining star has arisen, a star which seems to serve Egypt and the children of Egypt… which wants to carry out a great propaganda service… what is this propaganda which will serve the homeland in the greatest possible way? It is cinema… pure Egyptian cinema, national cinema… what is preventing us from having, within a few short years, a city like Hollywood?

In her second film, Girl from the Nile (1929), she attacked stereotypes around Egyptian women.Her next productions were less successful, however. Silent movies were quickly becoming unfashionable, but Layla’s huge success recouped the financial losses. Aziza also appeared in other films: the French production, The Tunisian Girl in 1930 and the Turkish films, The Egyptian Author and In the Streets of Istanbul in 1932.

After seven years, she divorced al Sherei, and married his younger brother Mustafa. Her career stalled through the 1930s, and she was obliged to sell her studio. However, she had another chance at fame, starring and writing the script of The Apple Seller, an adaptation of George Bernard Shaw’s Pygmalion. The film was released in 1939. While filming, she struck up a romantic relationship with the leading man, Mahmoud Zulficar. She divorced the second al Sherei brother and went on to marry Zulficar. The couple moved to a farm near the Pyramids, replete with a swimming pool and established Amir Films, which was hugely profitable.

In the 1950s, Aziza discovered she had cancer and continued to work on a screenplay up until her death. She did, however, take on the leading role in the drama I Believe in God, but did not live to see the premiere. A bouquet of flowers was placed in her seat to mark her loss.

Aziza made 25 films in total, many of which are now lost, but her legacy as the founder of Egyptian cinema is enduring.