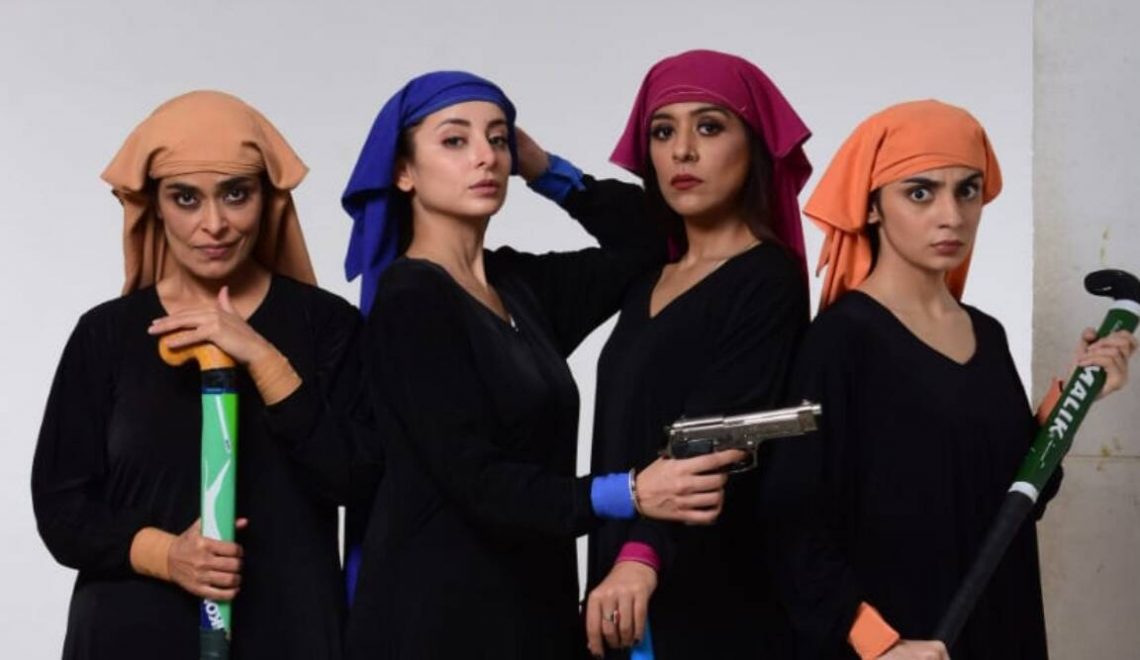 Churails will put a spell on you

Churails – Urdu for witches – is a Karachi-set fantasy drama available on Zee-TV, which was briefly unavailable in Pakistan for spurious reasons, but has now been restored to the service. Churails, features four main characters who found the Churails women’s detective agency, initially focussing on tracking cheating husbands, but eventually becoming embroiled in a more sinister conspiracy.

A key moment in the first episode is where guests at a high-society wedding line up, all facing the camera, seemingly poised to launch into a Bollywood dance routine. They are all knocked to the ground by a poorly-installed chandelier. It’s not just a great comedy moment, it’s an indication of how far Churails wants to distinguish itself from the cliches of South Asian media. Churails has all the snap and crackle of Netflix’s finest offerings, and deserves the viewing figures to match.

Churails sets its frame rapidly. Sara, a lawyer-turned-housewife, is finding the mystique of married life wearing thin, and then realises her husband is a serial cheat. Along with her friend Jugnu, an elite wedding planner who’s realising that she can’t have it all, Jugnu’s maid, Batool, a murderer just released from prison, and Zubeida, a younger woman whose passions are boxing and browsing Tinder, she forms a women’s detective agency. Together, they recruit more women into their growing enterprise, capitalising on women’s often overlooked talents within Pakstiani society. With such a large cast, many characters are necessarily one-dimensional, yet Churails manages to bring an unprecedented diversity through this device, bringing us, for instance, a devoted middle-aged lesbian couple (who are also, usefully for the plot, professional car thieves). It’s an added bonus that the relationship isn’t presented in any way as titillating to the viewer, but as a simple romantic commitment between women.

Often, Churails’ narrative momentum is such that character development can’t keep pace. Transitions are often abrupt: the agency, for instance, is formed far too quickly to make sense from anything but a narrative sense. Fortunately, most of the actors have the talent to compensate, like skilled rickshaw drivers navigating Karachi’s uneven streets. Yasra Rizvi, playing Jugnu, is particularly versatile, able to crumple from alpha-bitchiness to vulnerability and back again through subtle changes in her expression. Nimra Bucha, as Batool, conveys a compelling sense of menace through her stillness, her glittering eyes, and the tilt of her magnificent jaw. The doe-eyed Sarwat Gilani carries the burden of the main character Sara ably, if unspectacularly, and Mehar Bano’s prickly Zubeida is provides a welcome injection of youthful energy. She gets one of the series’ most powerful lines. In a situation of peril, she’s advised to play nice to keep herself safe. She glares at herself in the mirror, her eyebrows barbed with defiance. ‘Sweet and silent can go fuck itself.’

Visually, Churails is a treat. The direction is generally very strong, and occasionally engagingly flashy (although the fight choreography is lack-lustre). Although occasionally over-reliant on generic ‘suspense’ loops, the soundtrack is enjoyable, from the theme song – which lurches from a louche Latin American beat to an abrasive rap – to the unexpected entrance of Tchaikovsky’s sugar-plum fairy pirouetting across a tense moment.

Set dressing has been used particularly effectively. Sara’s flawless designer kitchen and Jugnu’s eclectic, arty décor present as much of an insight into their character as their dialogue does. The Churails various bases of operation each suggest the dynamism and creativity of the women working within them. The final confrontation takes place in a room with dominated by a massive chest of drawers, each drawer containing dark secrets, and walls hung with paintings of prey animals. The sense of confronting a dangerous, powerful animal in its den is powerfully and simply conveyed.

The Churails disguise themselves in burqas of varying colours, looking like fundamentalist power rangers, affording themselves of a culturally acceptable mode of disguise to a subversive purpose. Insertions of fantasy elements – red-tinged dreamlike images of menacing schoolboys – turn out to be relevant to both the plot and symbolic language of the series as a whole, and carry the intrigue along. This sense of forward motion is intensified with a flashback structure – the Churails undergoing a police interrogation – which signifies from the start that Churails has ambitions far beyond being a quirky episodic crime drama.

The major shortcoming is that, as a fantasy – and one that occasionally verges into the grotesque – Churails doesn’t handle reality well. The montage of poverty in Hyderabad feels mawkish and uncomfortable, and the backgrounding of the characters from the wrong side of the tracks is underdeveloped. Churails is most comfortable within Sara and Jugnu’s elite world, in its exaggerated, sensationalised form.

Fittingly, the series most pointed critique is of the beauty industry, from cosmetics to modelling agencies. Through investigating a missing persons case which crosses both these industries, the Churails unravel a conspiracy – this being the most apt signifier for patriarchy available within the series’ fantastic framing. The final confrontation pulls together the themes of concealment that have been part of the drama since Sara unlocked her husband’s iPhone with his fingerprint while he was sleeping, and since the Churails hid their detective agency behind a store-front announcing itself as ‘Halal Designs.’ Sara, hidden under her full-face veil, stands against the series’ villain, masked as an animal. Her disguise is culturally positioned as a way for women to move around the world without fear of sexual harassment and objectification; his, on the other hand, is a way of avoiding accountability for his predatory nature. The power dynamics could not be more explicit.

Churails does not sit entirely comfortably under the category of feminist art, despite a critique of female objectification sharp enough to shave your bikini line. Issues around motherhood are particularly under-nuanced. However, it is certainly an empowerment fantasy that any feminist will enjoy. The bewitchment can only be increased if you watch it Jugnu style – sprawled on the sofa with a bottle of red wine at your side and a fat joint in the pocket of your elegant pyjamas.

Churails is available to stream on Zee5 here.