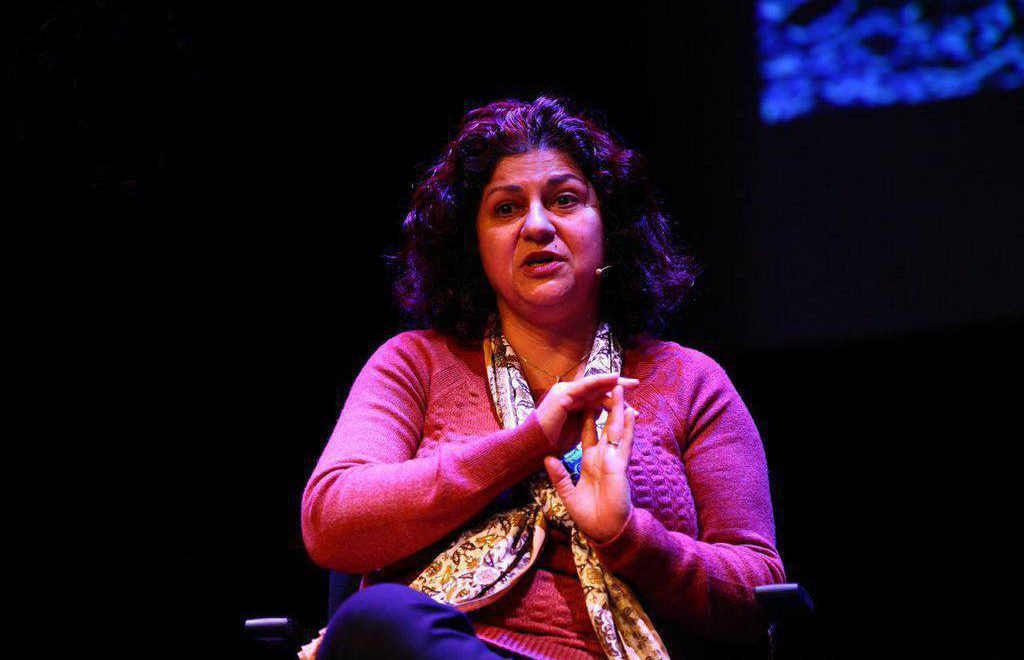 Yanar Mohammed on trafficking in Iraq

Yanar Mohammed is the President of Organization of Women’s Freedom, our grantee partner in Iraq. The group focuses on protecting women’s human rights, including fighting against trafficking of women and girls, and operates six safe houses for women survivors of violence. In this interview with Yanar, we hear about how her organization’s work against trafficking in women and girls, particularly sexual exploitation, has been impacted by the turmoil caused by Islamic extremists and ISIS.

Yanar, you’ve been an activist and a defender of women’s rights in Iraq for over 13 years. What do you think are the main challenges women in Iraq are facing right now?
We focused in the last year on working against trafficking in women and girls and expanding a new network, the Network of Anti-Trafficking of Women in Iraq. We started the network in 2013, barely nine months before ISIS began gaining ground in Iraq. As ISIS grew, they started their attacks against women in the north of Iraq, including against the women of Yazidi faith. They trafficked them in broad daylight.

Trafficking in women and girls is now a tactic used by opposing groups in instances of sectarian violence in Iraq. Women and girls are looked upon as the representatives of a community’s honor, and so the sexual exploitation of women and girls belonging to a certain community is seen as the most effective way to humiliate and break it. Unfortunately, it is therefore not a surprise that the so-called Islamic State, ISIS, as a Sunni group, has targeted non-Sunni Muslim women and girls such as Shi’a Muslims, Christians, and Yazidis. Retaliations ensue and wars are led on women’s bodies.

When ISIS began to enslave women, we found that this was the time when we should rise to the occasion and highlight the issue of trafficking in society and the government. This is an issue that needs to be addressed by laws, practices, programs, and by some understanding from the society as to what it means that a woman gets compromised, gets exploited, and gets enslaved. So we set up this network, which is now about 40 NGOs working together on the issue. We began to talk about trafficking in women and girls, especially sexual exploitation, and address it as something that’s not only happening under ISIS but also happening in Iraq more broadly, without anybody daring to give it any importance.

Beyond ISIS, orphans and widows of war in Iraq who are extremely impoverished have fallen prey to sexual exploitation. They are being used and exploited and violated daily in Iraq, without anybody thinking of it as a human rights issue. So this is our focus; we have decided we will work on this until we get the government to pass laws that make the suffering of these women less, and also that open the way for us to protect the women from this kind of violence.

Is there any legislation right now against trafficking?
We demanded that the government pass a law for the financial support of Yazidi women when they step out of their enslavement. When they come back to areas of Iraq that are not under ISIS control, they should be compensated just like prisoners of war for the sufferings they went through. And we were so happy when it took only a few months and the Iraqi government decided to give monthly stipends for survivors in May 2015. That was the first success of the network. At the time nobody else had demanded this kind of support for ISIS survivors, so we felt that we were on the right track and that we should proceed to the rest of our demands that we needed in order to address violence against women.

What would you say is the level of public awareness around the issue of trafficking?
We have struggled a lot to make many words and terms debatable in our society—to remove the taboo. I will give you an example: in 2003 when we began to talk about honor killings and how it needs to stop, everybody was disgusted with us and saying that women’s groups should refrain from speaking about taboo and sexual issues, and that we do not address women’s rights in a way that they find acceptable. It took us almost 5 years to make discussion of honor killings a mainstream argument. Now when you go to Iraq, the issue of honor killing has become such a regular thing to talk about. There are so many NGOs that are standing against it, talking about it, are lobbying against it. Whenever we have an issue like this, we find ourselves the first ones on the front lines to address it until, it becomes a mainstream argument.

Now as we talk about trafficking and discuss sexual exploitation of women and girls this issue is a very taboo and difficult issue to address.

How many women and girls in Iraq are at risk of being trafficked?
The dilemma of displacement in Iraq is huge because of ISIS. The number of displaced people is two million, going to three million. Most of these are women, because the men are either in the Iraqi army fighting ISIS or have been recruited into militias also heading to fight ISIS, or stuck in the cities defending them. It may be impossible to give the exact number, but we can estimate that out of the 1.5 million women who are displaced, half of them are between ages 16 and 30—the biggest age group at risk of trafficking. So I would say not less than 100,000 women are being trafficked at this point in Iraq.

So the political instability caused by ISIS is increasing the threat of trafficking for women and girls, even if ISIS is not doing the trafficking directly.
Yes. ISIS has created the most ugly reality of trafficking, where they defend it as a religious right. They say it is their right to enslave the “spoils of war” who are not of Muslim faith. They describe them as faithless and as less of human beings whose enslavement makes them better, makes them closer to Islam. ISIS has brought an example that has totally shocked the region and shocked it in a way as to taking us back to a time when people had no human rights, basically. And they are trying to make it a fact to force on the people of Iraq, Syria, and maybe other places if they are allowed to expand.

Can you tell me about the shelters that your group runs?
Our shelters are currently keeping safe women who survive trafficking. They are also getting educated; our shelters are not only a place for women to rest and be safe, they are also schools for social transformation for women to turn from victims into defenders of women. We only had one shelter until 2008; since then we have expanded to have six shelters all over the country. We also have a pipeline from the southern city of Busra, to direct violated women to our shelters in Baghdad. And we have many supporters in the network of the 40-plus NGOs, who are our eyes and ears in more than nine cities in Iraq and are guiding women who are in need of shelter to us. I like to put it in a very short story: our organization was able to spread its wings over most of the Iraqi cities in the last few years.

However, the Iraqi government is not facilitating our undertaking of women into our shelters. And it boils down to one point—we need a piece of legislation from the Iraqi government to provide legal status to shelters that are run by NGOs or other private sector groups. Although the government does not have a law that says that our shelters are illegal, they do have a law that allows the ministry of social affairs to determine if they should stay open. So some of the tribal and misogynist officials did tell us in the past that we are doing an illegal thing, but they did not shut us down.

So, although we are protecting women from trafficking and domestic violence and all that—although we are doing the duty of the government, the duty the government is not taking seriously and do not want to move on, and although they should be supporting us and applauding us for doing their job, in reality they confront us, telling us that our sheltering of women is promoting promiscuity, that it is encouraging women to go against their families and have full sexual freedoms and come stay in our shelters. So some governmental officials have intimidated us in the past, telling us we are doing something illegal, when we are protecting women.

Sign Global Fund For Women’s petition and show solidarity with Yanar and other daring women in the region.

Would you say that action now is especially important to protect women? Is right now a critical moment?
Right now is a very critical moment because ISIS is at the point where it can be defeated. It has lost the social support of those among the Sunni groups in Western Iraq that were supporting it because people saw the atrocities that ISIS can commit against them. It is a very special moment in time to act against ISIS, but is the kind of action we are seeking a military one, where we have more US army in Iraq? No.

Our experiences of the last 13 years tell us that US intervention in Iraq never brought us anything good. It always has caused more deterioration. Now is the time to have a political intervention, and to ask the Iraqi government to stop its sectarian, politics that gave way to ISIS, as well as empower the Iraqi army so that they can regain the cities that were taken by ISIS.

What are some of the other forms of violence that women come up against in Iraq?
We have many kinds of violence we undergo, and we know what is making this kind of violence worse, which is Islamist extremist parties reaching power. Some of these parties have shown us a terrible example of what they want to bring to Iraq, including legislating for Jaafari law. This law allows the marriage of a 9-year-old girl to an adult man—in other words it legalizes pedophilia in Iraq. It also allows men to be polygamous, and allows for getting rid of wives if they are not sexually pleasant for husbands.

The amount of humiliating material in this law against women is incredible, and out of this era. It’s something that modern humanity cannot even bear to hear of. We must keep this legislation outside of parliament, because the law was not passed, but it is still waiting for us. The Islamist political parties are just waiting for some stability and for the moment when they feel stronger to bring back this legislation. And that would really be the end for Iraqi women.