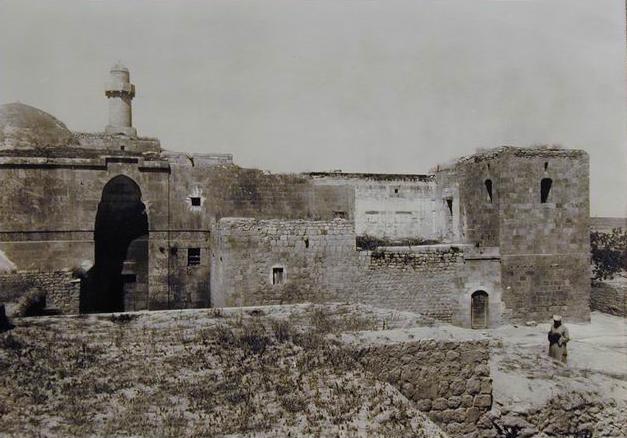 Dayfa Khatun was an Ayyubid princess, daughter of Sultan al-Adil I, who served as Regent of Aleppo during her grandson’s minority. She was a politically able ruler, engaging in the military struggles of the time and developing the city.

She was born in the citadel of Aleppo and raised as one of four sisters in Egypt, where her father was reigning as Sultan. Her older sister Ghazia was married to her cousin az-Zahir Ghazi in order to smooth over relationships between his family and her father’s. Al-Adil I was Saladin’s brother, and had provided military support to his campaigns. Az-Zahir was a son of Saladin, the founder of the Ayyubid dynasty. The Ayyubids administered Syria via city states; az-Zahir was the heir to the city state of Aleppo.

Ghazia died without having any children in 1212, and az-Zahir married Dayfa as a replacement for her sister.  The marriage unified the Ayyubid dynasty and was performed in a huge ceremony involving all the emirs of the state. Aleppo was decorated to welcome the new bride who was gifted with jewellery. Az-Zahir died in 1216, less than four years after the birth of their son, and Dayfa and Ghazi’s young son al-Aziz Muhammad ascended to the throne. Az-Zahrir appointed a regent to rule in his place.

Dayfa and the regent fended off a challenge to al-Aziz’s succession from the son of one of Az-Zahir’s concubines by concealing the fact of Az-Zahir’s death while they consolidated their position and ensured al-Aziz’s succession, as well as maintaining political stability in Aleppo. It is likely that Dayfa’s influence as Queen Mother increased her status. Al-Aziz reigned, with the regent’s assistance, for twenty years before his own death from pneumonia. At his death, al-Aziz Muhammad’s son, an-Nasir Yusuf, whom he had fathered with a Turkish concubine, was only seven years old, and unable to rule. Rule passed to a council of regency headed by four prominent men. Dayfa took complete control of the council. All decisions were approved and signed by her, and she was able to make decisions independently. She assumed the title al-Malika, reflecting her power; her grandson was named al-Malik. Dayfa did not make any other attempts to express her sovereignty, seemingly content to serve as regent.

While Aleppo faced many threats, Dayfa tended to avoid conflict through her skills in diplomacy. Her first challenge was the fraternal conflict between her brothers al-Kamil in Egypt and al-Ashraf in Damascus. Al-Kamil had challenged her regency and treated her envoys discourteously, sending gifts to potential rivals of the young Malik. Al-Ashraf convened a Syrian confederacy to resist al-Kamil’s expansion into the Emirates, which Dayfa joined, inviting the Seljuk Sultan Kayqubad I. Together, they demanded that al-Kamil cease the expansion of his territory. He agreed. However, al-Ashraf died shortly after forming the council. In his absence, the confederacy crumbled. Al-Kamil invaded Damascus. Dayfa attempted to aid al-Ashraf’s successor, but al-Kamil’s forces could not be repelled, and he soon surrendered.

Al-Kamil allowed captured Aleppans to return, probably as a gesture of goodwill towards his sister. Dayfa regrouped, demanding a pledge of loyalty from the amirs, nobles, soldiers and citizens of Aleppo and built alliances. She prepared the city for a siege, increasing armaments and supplies. However, al-Kamil died before any invasion could take place, and the Ayyubids were cast into a succession crisis. Dayfa sent the Aleppan army after her nephew al-Muzaffar, Lord of Hama in Western Syria, who had sided with al-Kamil. Her army plundered the countryside, captured a town, and then besieged Hama. Under her orders, she refrained from capturing the city and ultimately withdrew. Later, Dayfa restored some of the villages she had captured to al-Muzaffar in a gesture of reconciliation.

Thereafter Dayfa avoided the fratricidal conflicts typical of the Ayyubids, refusing any collaboration with the warring factions. Indeed, she was able to leverage her neutral status to negotiate peace. She was, however, forced to engage with Crusaders when they raided Aleppan farms. Aleppan forces besieged their castle at Baghras until they begged for a truce. Dayfa granted them mercy; however they broke the truce. Dayfa sent her army to beat them into submission. She would have no more trouble from the Crusaders.

She also had to contend with Khwarazmian incursions into her territory, at a time when many of her forces were away from Aleppo, supporting the Seljuks against the Mongol Empire. Dayfa’s trusted general was captured, and the northern region of Aleppo was plundered. Fearing for the city itself, Dayfa gathered support from her allies, including the lord of Hims, leading an army of four thousand warriors, of which three thousand had been contributed by the Seljuks. She built alliances with the Arabs in Aleppo and freed Crusader prisoners to reduce the likelihood of being drawn into two simultaneous conflicts. Gradually, the Aleppan forces dispelled the Khwarazmian forces, taking the towns of Edessa, Sarouj and Raqqa for Aleppo; other territories were gifted to the Seljuks. Dayfa also provided forces to defend these territories from further Khwarazmian attacks.

Through arranging intermarriages with the Seljuk Sultans, she gained more allies, drawing Aleppo away from the Ayyub dynasty. She also worked to develop the city, building the al-Ferdaws Madrassa and appointing teachers to work there. She also built the Kanqah al-Farafira for the use of the Sufi order, leaving her legacy to the city she had protected throughout her life. ‘She behaved like Sultans do,’ remarked Syrian historian Ibn Wasil. Ibn al-Adim, an Aleppan historian, commended her commitment to the city: ‘She was resolute in her kingdom.’