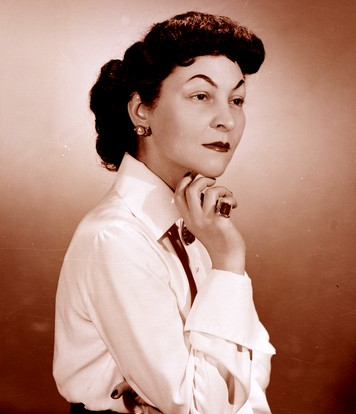 Doria Shafik grew up in a modest and traditional middle class family, as the third child of six, and the second daughter. Her life was dedicated to feminist activism in many forms, from poetry and writing to organisation building, and through directly confronting the sexism of the society, which she lived in, attempting to forge a new political space for women.

Doria learned about the problems of divorce and polygyny and the embedded nature of ‘honour’ and ‘shame’ in Egyptian society at an early age. Due to her mother’s fatal illness, a marriage was arranged for her when she was just 13. She successfully asked both for the dissolution of the engagement, and to live with her father, a generous man who cared deeply for his daughters and their education, rather than her strict and traditional grandmother. Doria aspired to a ‘brilliant career’ – registering to take a baccalaureate largely through independent studies, becoming the youngest person in Egypt to achieve the qualification, and placing second across the entire country.

Doria wrote to Huda Sha’rawi, campaigner for the reform of family and against the veil, clearly inspired by her passion for promoting women’s causes, and received an invitation to visit her, thus starting the most important relationship in early Egyptian feminism. At just 19, at Sha’rawi’s invitation, Doria made her first public speech before Egyptian Feminist Union. Shortly after this, she left Egypt to study philosophy at the Sorbonne, where she received a doctorate – being one of the one of the youngest Egyptian women to receive such a qualification. She was often lonely in Paris, but excelled in her studies, taking a special interest in the philosophy of Rousseau. Finding her lodgings near the Bois de Boulogne cramped, she impulsively moved to the International House, where she was able to live with other women from all across the world. Many of them, like her, were women who broke the taboos of their cultures to pursue their studies.

Doria returned to a divided Egypt: ultra-nationalist organisations confronted the newly formed Muslim Brotherhood for control of Egypt’s future and identity. Over one of her summer breaks, Doria entered a beauty pageant to compete for the title of Miss Egypt, placing second, causing a scandal. This also drew a marriage proposal from Ahmed al-Sawi Muhammad, the founder and owner of a popular magazine, which she accepted. Their marriage, which took place in Shar’ari’s summer residence, made front page news. However, immediately after the marriage, al-Sawi presented Doria with a picture faked to make her look naked. which he intended to use as a threat against her ‘honour’. Doria immediately annulled the marriage, and returned to the Sorbonne to pursue a doctorate, returning to the vivid intellectual atmosphere of Paris in the 1930s.

While in Paris, she met with her handsome and charming cousin, Nour al-Din Ragai, and a romance ensued. They married in Paris. Doria’s work on the Egyptian feminist movement reflected the liberal humanist traditions of France, focussing upon individuals over collectives, grounded in a belief that Islam, if properly interpreted, presented no barriers to women’s liberation. She graduated with the highest honours offered by the Sorbonne. However, upon returning to Egypt, she was unable to find a teaching post, being refused by traditionalists at Al-Azhar University. She redirected her energies towards feminism but was refused by Huda Sha’rawi’s Egyptian Feminist movement due to a feud between the two women.

At a loose end, Doria stumbled into an opportunity: Princess Chevikar sought her out to serve as editor-in-chief to a new cultural and literary magazine she wished to found, entitled La Femme Nouvelle.  Doria struck back at critics who characterised her movement as elitist and Westernised through the establishment of an Arabic language women’s magazine, Bint al-Nil (Daughters of the Nile) intended to raise women’s consciousness of their rights. Bint al-Nil was launched into an atmosphere rising political divisions: a growing Islamist right wing, and a left wing, which was increasingly attracting students as well as workers. Doria carved her own path with the Bint al-Nil magazine where the problem page not only offered advice, but practical help for women with problems delivered through her personal office every Friday. Upon the death of the Princess, Bint al-Nil evolved beyond being a magazine to ‘a new movement for the liberation of Egyptian women,’ concurrently moving towards a more socially conscious, less individualistic form of feminism.

Increasingly visible as a personality – in the middle classes for the magazines she edited, and amongst the working classes for programmes she developed to combat illiteracy, she used her fame to organise a march on parliament, demanding access to equal rights and a reform of discriminatory family laws. Doria then found herself an international celebrity, a position which was only reinforced when Bint el-Nil members besieged Barclays Bank, closing it down for 24 hours, and then, in her most daring move, a mass hunger strike to protest the lack of representation of women in Egyptian public life.

After Egyptian women were granted the right to vote two years later, Nasser co-opted various women’s movements. Without their independence, feminist and other social justice movements lost their dynamism. Doria started a second hunger strike in order to demand that women could stand for election as well as vote. However, her criticism of Nasser meant that her protest did not receive much sympathy, even from fellow progressives, who had begun to regard Doria’s liberal, humanist positions as dangerously Western. Doria was placed under house arrest.

Forced into seclusion, Doria occupied herself with poetry and other writing. She sank into a depression, which intensified once her daughters left home, and ended her own life in 1973.