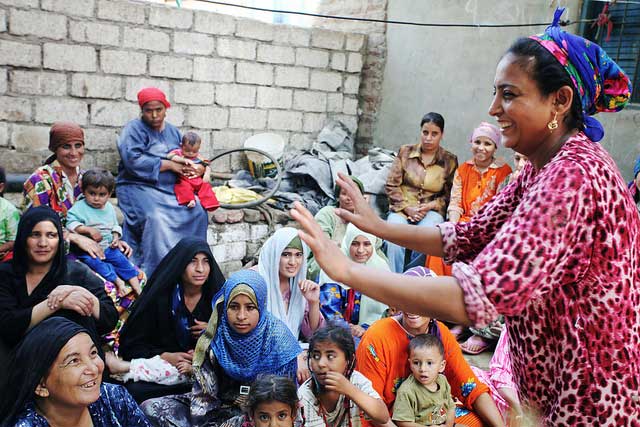 In Egypt, defending human rights could land you in jail

Over the past few months, the Egyptian government’s crackdown on human rights and feminist spaces in Egypt has been escalating, with women human rights defenders and critical women’s groups subjected to official investigations and interrogations, detained, and forced to stop their critical work.

Egyptian women’s groups agree that while the government’s crackdown on human rights and shrinking space for civil society is nothing new, the current situation is the worst it has been in years. “It’s a very difficult time. But we are very strong and we are used to such situations because it’s not the first time,” says Noha Ali, International Relations Unit Officer at the Center of Egyptian Women Legal Assistance in Egypt. “But this time we feel that it’s very severe. They are not playing this time, they are not just threatening.”

“We have a choice to make: are we going to get loud in decrying by all means what is happening? Or are we going to wait until the sliver of hope is gone and we are left timidly proclaiming our solidarity in uncertain terms? Get busy and get loud, let the world know that in Egypt, the most valiant, the bravest, the most crucial of groups are being targeted,” said Zahra Vieneuve, Global Fund for Women’s Program Officer for the Middle East and North Africa.

Most recently, on April 5th, El Nadeem Center for the Rehabilitation of the Victims of Violence and Torture—one of the only clinics in Egypt providing critical services to survivors of violence and torture—was raided by security forces for the second time in two months. The two bold directors, Dr. Magda Adly and Dr. Aida Seif El Dawla, refused to leave the premises while the police tried to evict them, without showing an official closure order. This came less than two months after the Nadeem Center for the Rehabilitation of the Victims of Violence and Torture was handed an administrative order of closure on February 17th by the Egyptian Ministry of Health and the Azbakeya district, where the center is located. The order stated that the center had violated the terms of its license but did not provide any details. El Nadeem’s lawyer was able to negotiate with authorities and Nadeem’s team fought to keep their doors open in a meeting they demanded with officials from the Health Ministry.

“This is part of the systematic crack down on NGOs and human rights groups that have been documenting and rehabilitating victims and survivors of human rights abuses in Egypt,” says Mozn Hassan, Global Fund for Women’s Board Member and the Founder and Executive Director of Nazra for Feminist Studies in Egypt.

On March 20th, Nazra for Feminist Studies was summoned as part of an official interrogation by the Egyptian government targeting civil society organizations. In a statement published by our sisters at Nazra for Feminist Studies, the leading women’s group confirmed that they were included in an official interrogation in case 173, known as the “cases of foreign funding for civil organizations in Egypt”, and that four staff members—including Mozn Hassan—received official summons for interrogation as well.

“The investigation with Nazra comes within the frame of taking escalating steps to close the public space by conducting a crackdown on independent civil society organizations in different ways, ranging from inclusion of several organizations in interrogations, to travel bans, summoning of organizations’ staff members, and visits of inspection committees to some organizations,” explained the statement issued by Nazra for Feminist Studies.

These incidents are just the latest in a string of harassment and attempts to shutdown civil society organizations. Ironically, the crackdown against Nazra came at a time when representatives of governments, United Nations entities, and women’s groups and civil society organizations from all regions of the world were meeting in New York at the 60th session of the United Nations Commission on the Status of Women (CSW) to advocate for a greater focus on women’s rights in the context of the recently adopted Sustainable Development Goals. At CSW, one of the key conversations was the shrinking spaces for women human rights defenders and the various attacks to which they are subjected by state and non-state actors.

El Nadeem and Nazra, along with other leading women human rights groups in Egypt, fill critical spaces in the country, supporting survivors of violence, advancing women’s rights and empowering women, and working to document sexual violence and torture in Egypt.

“El Nadeem Center is not a place that can be sealed off. El Nadeem is a team committed to combating violence, torture, and injustice and struggling for the provision of medical and health care to those who are deprived of their freedom in places of detention,” explained the El Nadeem team in a statement issued February 18th. “El Nadeem will continue supporting the oppressed and fight against torture and violence. In that sense, El Nadeem will always remain open.”

Established in 1993, El Nadeem has filled a unique and much-needed space in treating and documenting torture and violence throughout the country. In addition to its Torture Rehabilitation Program, which offers critical services to Egyptians and non-Egyptians who have survived torture, the Women’s Support Program supports survivors of gender-based violence and rape by providing listening and counseling. Its 24-hour hotline provides immediate counseling to those in need of support—one of the only hotlines of this sort in Egypt.

If you were to visit El Nadeem, the first thing you would see on its walls are works of art made by children as part of their treatment.

El Nadeem’s holistic approach to the rehabilitation of survivors of torture and sexual violence—from prevention to protection—has had a unique impact throughout Egypt. “Without the El Nadeem team, the rehabilitation of survivors of violence in the past five years would not have been as effective and developed,” adds Mozn Hassan. “They have been our mentors and have educated the other groups who are today working on the question of sexual violence.”

Nazra for Feminist Studies, founded in Cairo in December 2007, is a prominent women’s rights organization whose efforts to strengthen the Egyptian feminist movement and integrate feminism and gender awareness into politics and society has had a crucial impact on women’s rights organizing and actions in Egypt as well as throughout the Middle East and North Africa. The group has taken leading roles and positions in defending women’s human rights, combating sexual violence, supporting young women to run for official political roles, and educating a new generation of young feminists.

Expressions of support for Nazra began pouring in immediately after news of their summons for investigation was made public, showing the impact of the organization’s work on young women throughout Egypt and beyond. As one Twitter user put it: “Nazra is the best thing that has happened to me.”

“At the same time the Egyptian government is saying that women’s issues are a priority, they are trying to stigmatize a feminist group working hard on sexual violence and political participation for women by including them in the case of foreign funding,” explains Mozn Hassan of the current situation in Egypt. “This case might escalate to a prison sentence against me, as the founder and executive director of Nazra for Feminist Studies.”

Global Fund for Women stands in solidarity with our sisters at El Nadeem and Nazra, whose steadfastness, dedication, and humility is an inspiration to all of us. We urge our friends and global community to express their solidarity with El Nadeem and Nazra, as well as other women’s groups in Egypt, by adding their voices to raise awareness of this unacceptable crackdown on human rights organizations in Egypt.

Most recently, we joined Amnesty International and other human rights organizations around the world in a social media campaign to raise awareness around the situation in Egypt using #NGOSNotCriminals, leading up to a major April 20th court hearing calling two prominent women human rights defenders to defend their work. In March, we were among 43 organizations that signed onto an international statement condemning the escalating targeting of civil society groups in Egypt.

“Unless they arrest us all, we will continue in our work as long as we remain out of prison,” said El Nadeem’s director Aida Seif el-Dawla, in a statement made to Reuters.

We encourage our community around the world to be bold advocates for human rights groups in Egypt on social media, online, and among your networks. Raise your voices and help to raise awareness of this escalating situation. Reach out to Egyptian embassies and consulates and urge them to end their investigations immediately. Contact Egyptian embassies and consulates to demand they put an end to all investigations and forms of harassment against human rights defenders and critical civil society organizations immediately.

Together, our voice is stronger.