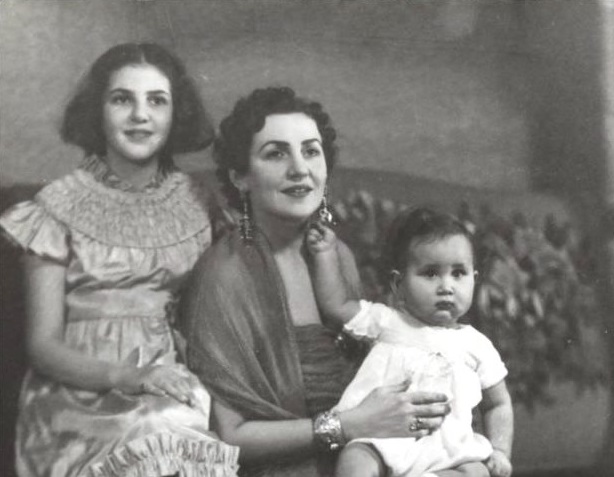 [A] lady of the Turkish feudal nobility who has thrown her yashmak over the nearest windmill and set her heart, Allah knows why, on becoming the first woman painter of her country. – Princess Fahrelnissa Zeid

Fahrelnissa (a name meaning ‘the glory of women’) Zeid was one of the first Turkish abstract painters. Born Fahrinissa Shakir Kabaaghacli into a prominent family, she developed a unique style over a five decade long artistic career. Fahrelnissa’s family rose from a humble background when her uncle became the Grand Vizier of the Ottoman Empire from 1891-5. She was born and raised on one of the islands of the Sea of Marmaris, near Istanbul. Her uncle was convicted of murdering her father when she was 12 years old. Soon thereafter, the First World War started; Fahrelnissa’s male relatives were called to national service and her school closed down.

She began drawing at four years of age and sketched constantly throughout her life, as well as painting prolifically. Her oldest surviving work is a detailed portrait of her grandmother, produced when she was 14. When her family declined into hardship, Fahrelnissa sold hand-painted postcards in order to buy brushes and paint. After the war, Fahrelnissa enrolled in the Academy of Fine Arts for Women in Istanbul which provided her with an extensive technical training, despite the expectation that art was a hobby for elite women, rather than a career.

In 1920, at 19, Fahrelnissa was married to Izzet Melih Devrrim, a writer fourteen years older than herself. She soon gave birth to two sons and a daughter, but the marriage was unhappy, and her son Faruk died at a young age. The saving grace of the marriage was that it afforded her the opportunity to travel widely, particularly to galleries and theatres in Europe. In Paris, Fahrelnissa was able to study under the French painter Roger Bissiére, a friend of George Braque. Upon returning to Istanbul, Fahrelnissa enrolled at the Academy of Fine Arts where she studied under Namık İsmsail. 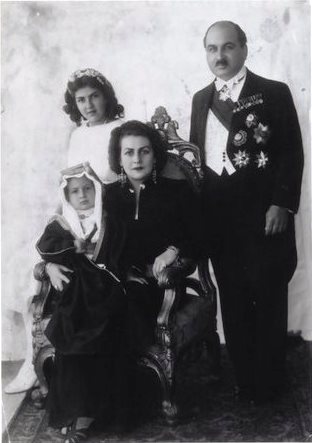 Prince and Princess Zeid Al-Hussein with their children Princess Shirin and Prince Raad, in Baghdad. Image: US Public domain

By 1934, her marriage had dissolved completely. She quickly remarried the Hashemite Prince Zeid al-Hussein. The couple moved to a fashionable area of Istanbul, where Fahrelnissa devoted herself to her painting. In 1935, Prince Zeid was sent to Germany as an ambassador for Iraq. Fahrelnissa was preoccupied with her duties as a diplomatic wife, leaving her with little time for painting. In 1938, the Prince was recalled to Iraq. Fahrelnissa was inspired by the sites of Iraqi antiquity, as well as the appearance of Bedouin women, a subject which was to inspire her work. However, she also felt stifled by the conservatism of Iraqi society, developing a severe depression, for which her main therapy was art.

She moved to Paris to recover; meanwhile, changes to the succession meant that Prince Zeid had now little role within the royal family. The family were freed from diplomatic responsibilities, and Fahrelnissa moved between Paris, Istanbul and Budapest, painting as a way to recover from her depression. This was a very productive period, as Fahrelnissa’s work became better known, partly through the influence of her former stepdaughter, now married to writer and critic Fikret Adil. She was introduced to the radical artists’ collective D Group and took part in their exhibitions, despite being an unusual addition as a princess. Her idiosyncratic art was dissimilar to their concentration upon high modernism and folk art.

In 1945, she organised her first solo exhibition in her own home, displaying 172 paintings. This was followed by many more exhibitions in Turkey.  In 1946, Prince Zeid was despatched to London, where besides her duties as a diplomatic wife, Fahrelnissa continued to paint, creating a studio within the embassy, as well as renting an atelier on Paris’ Left Bank. This exposed her to the influence of more abstract artists, which led to the creation of her most monumental abstracts which are iconic of her work. These were widely exhibited in Paris and the UK, where the British Queen and Queen Mother attended her first exhibition. Like Kandinsky, whom she greatly admired, Fahrelnissa considered art to have a spiritual power.

This productive period was interrupted by the coup in Iraq, in which the entire royal family were assassinated. Prince Zeid and Fahrelnissa were forced to leave the embassy within 24 hours, abruptly ending Fahrelnissa’s career as diplomatic wife and painter. Zeid himself was emotionally shattered by the massacre. In her late 50s, Fahrelnissa was expected to cook and take care of an apartment for the first time in her life. Even here, she was to find inspiration, producing a variety of artworks based around chicken bones. She developed ‘paléokrystalos’ (her own term) – featuring bones set within blocks of coloured resins, like insects in amber, and incorporated bones into her paintings.

As the 1960s drew to an end, Zeid’s health declined and he died in 1970. Fahrelnissa began painting otherworldly portraits, including some of her late husband. Five years after his death, she left Europe for Jordan where she would remain until her death. Here, she taught students and held a unique exhibition which featured her own work alongside those of her students. The exhibition claimed a space for abstract art and, with its entirely female artists, for women’s art in the Middle East.

Fahrelnissa Zeid stands as one of the most important modernist painters of the twentieth century and as a pioneer of women’s art, best known for vivid colours, bold linework and her monumental and kaleidoscopic abstracts.