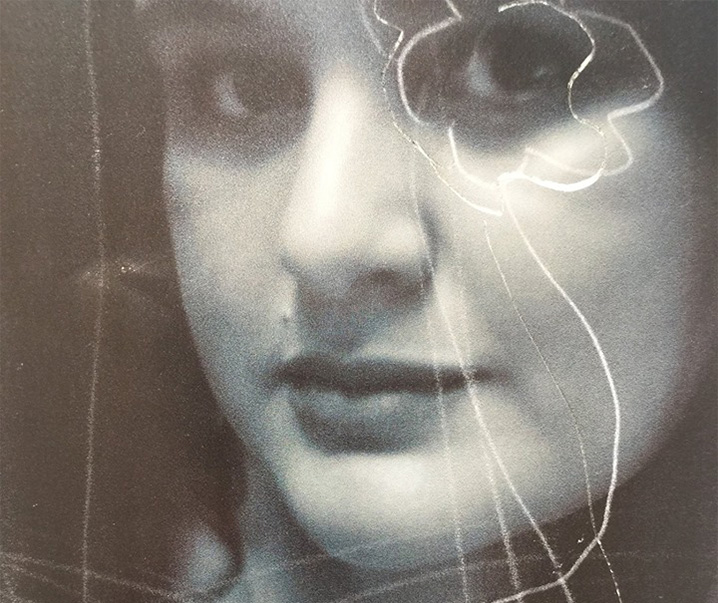 Alya Al-Sultani is a vocalist and composer, whose diverse musical style and interests reflect her upbringing in an Iraqi family in Tottenham, London. We asked her several questions about her life and work.

Moving to Tottenham exposed you to a different world of music from the Arabic classics. Can you describe this encounter?

Tottenham was, and has always been, an incredible place for emerging new music: a real melting pot of cultural influences. All of my friends growing up were from Caribbean and West African families, so I was listening to Shabba Ranks and Fela Kuti from the age of eight. People were listening to rare groove, reggae, dub, afrobeat and dancehall all around me. Even at my playscheme, one of the play workers ran a pirate radio station. We’d play draughts and talk music. He introduced me to electronic music and encouraged me to pursue music more generally. I was already playing piano at that time thanks to a very generous primary school teacher, Linda Philips, who gave up her lunchtimes to teach me (I am forever grateful, Linda).   At the same time, my parents were Top of the Pops obsessed. We watched it religiously every week. I loved the electronic sounds, synths and weird vocals that were popular during the 80s. Into the 90s, I got more interested in jungle, and then making garage, but also my classical music training took off. In the background the whole time was classical Arabic music, which my parents and I listened to almost daily, either in the car or at home.

Your music has a mixture of sounds, rhythms and styles from all different kinds of musical genres. How does that work?

I used to think there was a method to combining all these influences and I was focused on improving that method. I have realised since that all I needed to do was begin with my own authentic voice. I say this like it’s easy – but it has been a lifetime’s work and it will continue to be so. I’ve had to learn to believe that my voice is valid, and that what I have to say can be said. I think women of colour especially become very talented at shapeshifting to protect themselves, to not make anyone uncomfortable through their existence. It turns out people can survive the discomfort of what I have to say, and I no longer need to hide anymore. My whole musical and artistic journey has been towards freedom. It remains freedom that I ultimately seek in music.

What were your feelings about the UK after Brexit?

I was genuinely heart-broken. The government got what it wanted. The Tory government depends on small-mindedness and fear in order to stay in power. Together with the press, it has successfully turned this country into a small-minded and petty place. What I wasn’t expecting was the number of people on the left who voted for Brexit in an attempt to shake up the status quo or create a fertile space for a new socialist order. I didn’t expect that people like me, people of colour, immigrants, gay people would become cannon fodder for their ideological wet dreams. They did not care about the fall-out. I expected that from the right, but the left? That was disappointing. It opened my eyes to who is and is not an ally.  It must be an incredible feeling to know that whatever happens politically, you are never getting shipped out of the country.

Can you tell us a bit more about your latest album ‘Love & Protest’ and what we can expect from that?

I wrote the album in 24 hours, straight after the Brexit referendum result was announced. I started at 5 am that morning and just kept going. I had been writing the album in my mind for a year, in the run up to the referendum, in response to the rise in xenophobia. I felt the old chains around my heart tug again. I didn’t expect to feel them in 2016.  But the album isn’t about Brexit – it is about the times we are in. There are songs about sisterhood, care, love, Tinder, a song called Banaz, about Banaz Mahmod, the fetishisation of the black body… the album is full of humour and love, as well as rage. It probably isn’t what you expect. I recorded it at Konk studios with members of my collective. Collective X and it is produced by the legendary Orphy Robinson.

You work with a trio called SAWA. What is the dynamic within this group?

SAWA (a trio with pianist Clemens Christian Poetzsch and cellist Shirley Smart) came together because I wanted to experiment with music rooted in the oral traditions of Iraq and the Middle East. Folk music is passed on through the listening and singing together of songs, so it changes constantly.  Although I respect tradition and listen when purists correct how I am singing this music, I also have to be true to my experience all of the influences that are in me as a person living in the diaspora. Even the mistakes I might make are part of my experience and who I am. Every time SAWA performs the music, it is different to the time before. We listen to each other and respond to each other so that every performance is a unique and new conversation, even though the basis of our music is songs that are very old.

Who would you most like to collaborate with in the future and why? 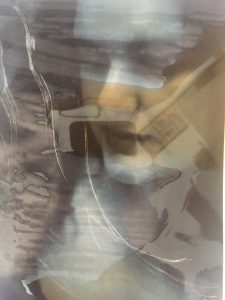 I started a new collective called Collective X, into which I have invited some incredible musicians. Each of them is someone I love collaborating with and my new album, Love & Protest is a documentation of the collaborations with many of them. I’d love to work with singer and poet Anthony Joseph, Black Top (Orphy Robinson and Pat Thomas), Grandmixxer (UK’s greatest grime DJ in my view), Shabaka Hutchings, Alexander Hawkins, Elaine Mitchener, Neil Charles, Dave Kane, soprano Sarah-Jane Lewis and others. I am currently working on a new project with pianist Robert Mitchell exploring the Songs of Sun and Shade by the mixed-race 19th century composer Samuel Coleridge-Taylor, and commissioning work from vibraphonist and composer Corey Mwamba in response to those songs. I am also performing at the London Jazz Festival with Joe Gallivan and Anupriya Deotale which is a huge honour.

You grew up listening to classical Arabic singing, and recently performed in Purcell’s opera, King Arthur.  Are there similarities and differences between these two classical forms?

Your latest single has a provocative cover with you dominating a bound Donald Trump! What message did you want to send with that cover? 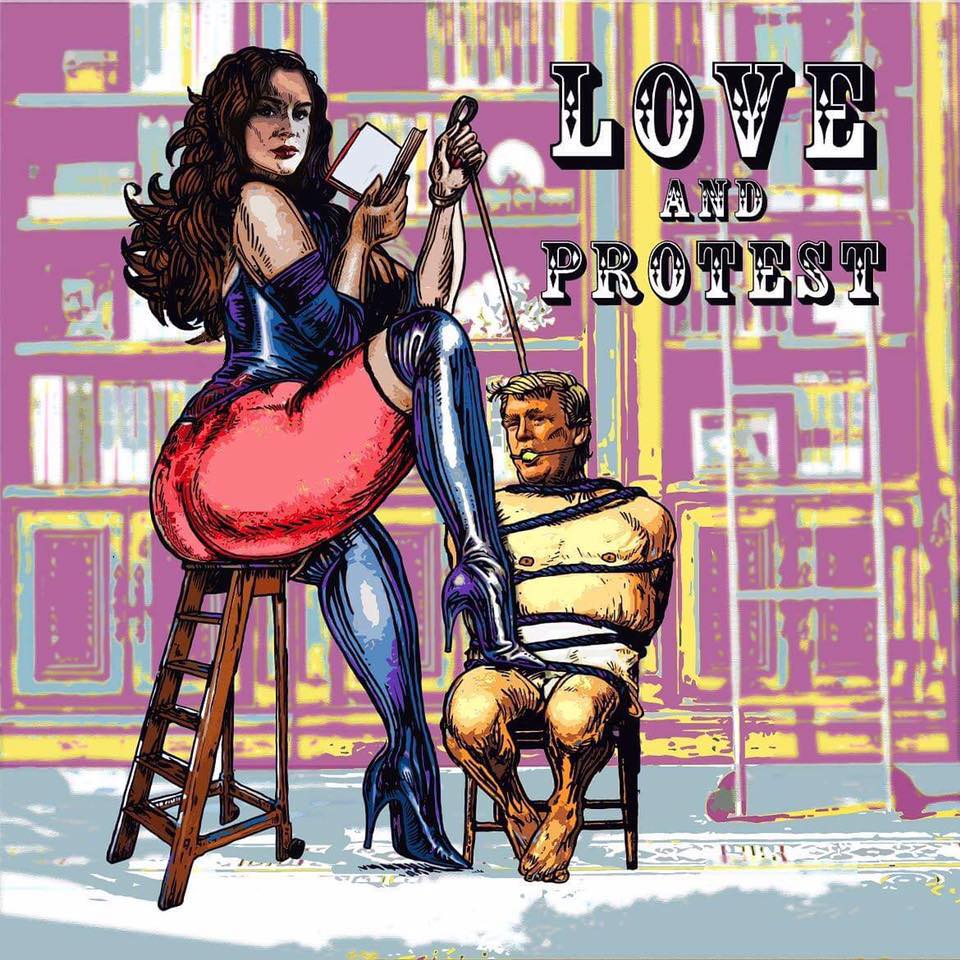 Music is often censored in the Middle East. Why do you think this is? What can we do to promote artistic freedom?

I think music is censored in some parts of the Middle East for similar reasons that women’s bodies and people’s sexuality is policed. Listening to music is one of life’s pleasures, and one of the most natural instincts we have. Policing the things closest to our joy and humanity is how we are controlled by the treacherous despots who run our countries. The solution has always been and will always be feminism. Free our women, and everyone will be free. We need a sexual revolution; artistic freedom will be achieved as a direct consequence. 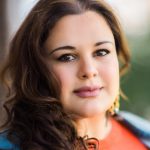