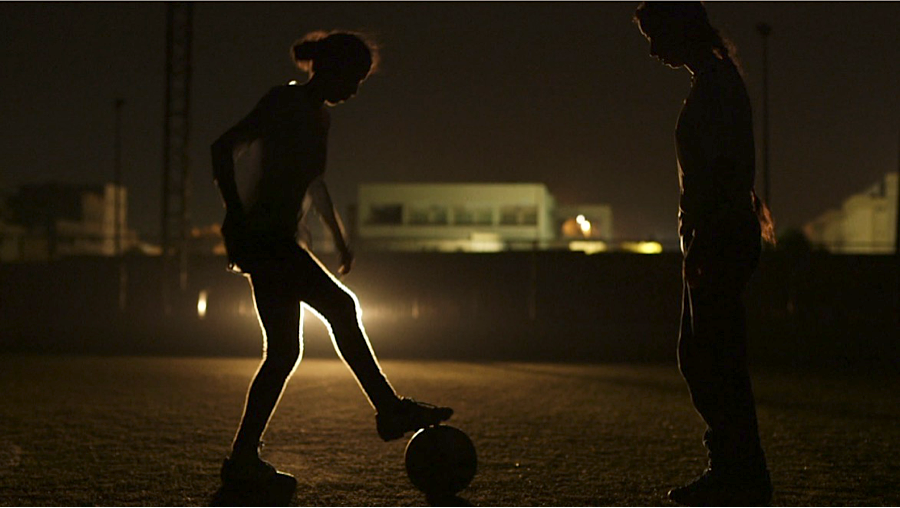 Naziha Arebi’s debut film ‘Freedom Fields’ is an intimate, five-year exploration of the lives of the women of Libya’s national football team. Brought up in the UK with a Libyan father, Arebi travelled to Tripoli for the first time in 2010, before the revolution of 2011. From 2012 she spent five years capturing the footage to make this documentary, providing an insight into the struggle to claim Libya’s future and identity. While the focus is firmly on the women of the team, the political background is constantly present – in the refugee camps, in the sounds of explosions and gunfire, in the women’s concerns about travelling and in wedding guests dancing whilst others crowd around a TV showing Al Jazeera, discussing the latest attack.

The team’s most challenging opponents are not on the pitch, but on screens; followers of radical Islam who denounce their ‘immodest’ kits and ‘sinful’ behaviour. Footage of the team celebrating in their bus – chattering and ululating, alive with joyful female energy – is set against an ominous soundtrack: the furious preaching of an extremist mullah, who decries them as daughters of Jews and atheists.

For their own protection, the team train with armed guards in camouflage guarding the edges of the pitch. The guards intercept – and burn – death threats sent to the women from Islamist organisation Ansar al-Sharia. But the guards can’t prevent the gathering pace and influence of extremists campaigning on social media. In what is felt as an act of betrayal by the team, the Libyan Football Association withdraws the team from an Arab-nations tournament to be held in Germany. They explain that this is for safety reasons due to the extremist threat. ‘You must understand, they are even threatening us too!’ explains a male representative to rows of women. Some are stone-faced in disappointment at losing out on what would have been the first international tournament in over ten years of existence; some are eloquently outraged.

This is only one of many disappointments they face, from problems with budgets to being turned back at a checkpoint for travelling without male relatives. The women’s struggles to participate in sports follow them home: at a domestic level, the women face the demands of balancing their love for sports with the expectations of traditional femininity and marriage. Shops full of glamourous wedding dresses are a constant presence, hovering in the background of the women’s daily lives. The multiple challenges the women face just increase their tenacity and creativity. At one point, for their own safety, they train at night during Ramadan; when the lighting in the pitch fails due to a power cut, they encircle the pitch with cars loaned by volunteers. They train silhouetted against the light of dozens of headlights.

With a cast of many engaging and committed young sportswomen, Arebi narrows her focus to three whose personal experiences form the core of the documentary: young women from very different backgrounds united by their friendship and shared commitment to sport. The sharp-witted Fadwa’s leadership skills are expressed in an irreverent sense of humour. Her constant joking only falters when she sombrely contemplates the prospect giving up football for marriage. By the end of the documentary, however, she’s both a successful engineer and the organiser of an NGO promoting women’s football in Libya, her smarts, eloquence and her love of the game transformed into activism.

Halima, a soft-spoken woman, with a passion for ice-cream and Adele, erupts in frustration as she watches an all-male crowd dancing in the streets, celebrating a victory by the country’s male team. Furious at her inability to participate, she sits in her car, bemoaning her exclusion from the sport she loves, and her country’s lack of recognition for herself and her teammates. Her quiet demeanour masks an incredible determination. She combines a rigorous training regime with studying to be a doctor. In the early parts of the film, we see her studying the female reproductive system; towards the end, she delivers a patient’s baby.

But the team-member dealing with the most difficult circumstances is Nama, seven years a refugee, living under the barbed wire walls of an UNCHR refugee camp. The film shows her caring for babies and the elderly in her cramped and noisy shanty town with a compassionate, weary brusqueness. The camp isn’t just marked by poverty, but haunted by a deep mourning for a lost home and a lost identity: the refugees come from the ghost town of Tawergha, wiped off the map by militias in 2011. Football provides her with a sense of hope and escape: as she waves a flag from a moving car, celebrating with her teammates, her wide smile is as rare as it is lovely. This is an explicitly feminist film, flying its colours from the mast with an introductory quote from Audre Lorde. Freedom Fields rejoices in its undivided focus upon women: their hardships, their struggles, their triumphs; their strength and their courage – as well as the power of sport to bring them together.

Freedom Fields is being released nationwide across the UK throughout 2019. For more information on upcoming screenings and events visit the official Freedom Fields website here.

Women from the film have united to form HERA. HERA is an NGO in Libya, using sport as a tool for reconciliation, trauma relief, healing and empowerment. If you would like to support their work donations can be made here.