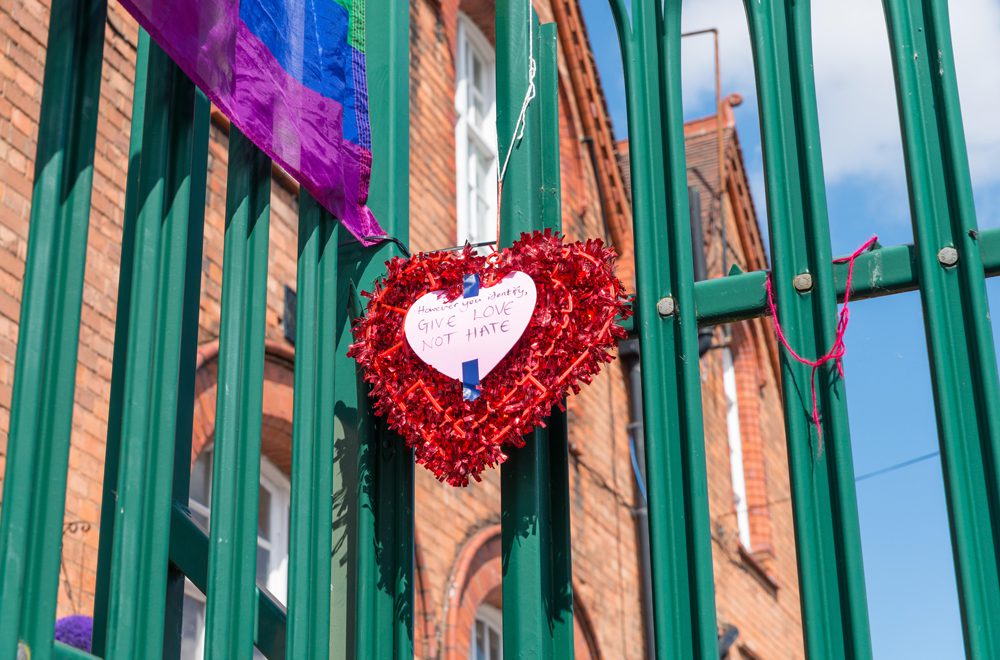 Some British Muslim parents have opposed the teaching of the ‘No Outsiders’ programme in primary schools, which is intended to teach pupils about diversity and equality. For weeks, they rallied outside the school gates – until they were banned. These aggressive protests captured the attention of the British media and public while stirring, once again, the debate around women’s and LGBT rights within conservative Muslim communities.

But these concerns seem too little, too late. The protests are no longer led by concerned parents. Extremist Muslims who believe that learning about sexual orientation is against their religion aggressively co-opted the protests. They were determined to continue the protests outside the school gates.

Staff and children felt besieged by Muslim fundamentalists. Sarah Hewitt-Clarkson, head teacher of Anderton Park Primary School in Birmingham refused to give in in the face of sheer intimidation. She has received offensive and threatening letters: ‘One parent is collecting signatures on a petition requiring me to resign,’ she said.

A peaceful group of LGBT activists putting up posters to show solidarity with the school admin were attacked by aggressive Muslim men. On one occasion, some protestors overtly expressed their homophobic and misogynistic views stating ‘This is against the word of God… God created women for men’s pleasure.’ One British Muslim parent expressed her disapproval of the #NoOutsiders programme saying, ‘It [being LGBT] is disgusting. If my child turned out like that, I would have to kill him for his honour.’ This is alarming. It is painful to imagine the fear she has instilled into her child’s mind.

In 2015, Anderton Park School, among others, was inspected as part of the so-called Trojan Horse scandal.  Fundamentalists seized the opportunity to manifest their prejudice against women and the LGBT community, and to intimidate the school administrations. The head teachers of the schools under inspection were harassed. They received death threats. One read: ‘Any head teacher who teaches my children it’s alright to be gay will be at the end of my shotgun.’

Then, in 2018, Muslim conservatives successfully forced a British school administration to reverse their decision to ban primary school girls from wearing religious dress through a campaign of intimidation and harassment. The ban on veiling, intended to protect young students from segregation and alienation, met with harsh criticism from parents and ultra-conservative elements within the Muslim community. Religious hardliners managed to send a shockwave among those who dared to oppose their assaults on secular democratic values.

The campaign against educationists has included death threats as well as vicious online propaganda. Regrettably, the naming and shaming of the dissenting individuals who disagree with hijab in British schools continued unabated. Eventually the hijab ban was reversed to ‘normalize’ the situation. The headmistress, Neena Lall, apologized for making a ‘huge error of judgment.’ This implied that the matter of concern was not the imposition of the hijab on little girls, but the offence to their parents’ religious sensibilities.

Many felt disappointed at British officials’ surrender to the rules set by ideological extremists. Activists who had lobbied for the banning of hijab for primary school children were apparently crestfallen. One British activist, Amina Lone tweeted:

Given the intensity of the situation, British educationists were left unsupported. The government refused to intervene and showed no signs of action against the vicious propaganda directed at teachers who objected to veiling and social double standards.

Where there is disagreement over controversial practices in a tolerant modern society, teachers should be safe to debate issues concerning children’s welfare without facing smear campaigns for expressing their views. So, how long will individuals have to face such extremist attitudes in the British society?

The imposition of hijab upon little girls is just the tip of the iceberg. Religious extremists are also invested in more misogynistic and discriminatory moves, such as garnering popular support for Female Genital Mutilation, Halala, and Sharia Councils which endorse gender inequality, and have been known to foster abuse and injustice disproportionately impacting women and children. Judges at a Court of Appeal ruled two years ago that the segregation of boys and girls at the Alhijrah School in Birmingham was unlawful. But the school administration has never ceased its continued policy to discriminate against its female pupils. Muslim girls are still made to eat after boys in this state-funded Muslim school.

Some Islamic faith schools have been criticised by the education regulator Ofsted in several reports over the years. The reports revealed that students can read that, ‘Thus man is definitely master of the woman,’ ‘the wife is not allowed to refuse sex from her husband,’ she must not ‘leave the house where she lives without his permission’ and ‘the man by way of correction can also beat her.’

The misogynistic and homophobic material found in the libraries of faith-based schools raise serious questions about a future generation that has been trained to be misogynist, homophobic and intolerant. The British authorities have allowed the situation to escalate to the point when these views are overtly propagated. There is also a liberal fringe in Britain which expresses full support for the view that ‘no one can tell women what they must wear,’ which they see as a violation of women’s rights, in any situation – except when telling women what to wear is religiously-motivated or justified.

Notably, neither homophobia nor misogyny were invented by Muslims. Islam, like Judaism and Christianity has traditionally seen homosexuality as a punishable sin. One can find intolerance in all religions; but Islam and Muslims are particularly prominent, due to the anti-woman and anti-LGBT legislation that has been implemented in several Muslim countries under the umbrella of Islamic laws.

And now, a group of Muslim fundamentalists are rallying outside of the British schools, chanting homophobic slogans in the name of Islam. British Imam Ajmal Masroor said, in an interview with LBC, ‘The Islamic sexual ethic is quite clear and quite strict. It doesn’t allow sex outside marriage and secondly marriage is only between a man and a woman. Anything else, as far Islam is concerned, is not allowed.’

We seem to have lost sight of the fact that these ‘clear’ and ‘strict’ Islamic laws violate human rights. It should be worrisome that the laws for which we excoriate totalitarian regimes like Saudi Arabia and Iran are echoing through democratic British society. The deafening silence on the part of influential Muslims may be a major cause of festering misogynistic and homophobic attitudes within Muslim communities. This is causing irremediable damage to British Muslim youth.

Further, the debate around Islamophobia, led by the All Party Parliamentary Group (APPG) on British Muslims, leaves children at the mercy of extremist religious ideologues. The vague definition of the term would label anybody who discusses the discrimination taking place within Muslim communities as Islamophobic. It is imperative for influential Muslim politicians and community members to come forward and condemn intolerance in the strongest terms, whilst putting these lingering semantic games to rest.

We should not presume that these parents have no idea what they are protesting about. Parents have inalienable rights, but no parent should have the right to abuse their children. There are some parents who consider it their right to put their toddlers through Female Genital Mutilation to protect them from immorality, or to kill rebellious daughters in order to preserve the honour of the family. The argument over the appropriate age when Muslim children learn about LGBT issues is a diversion from the more important issue of whether Muslim children learn to treat their fellow citizens equally and respectfully.

These intolerant ideas challenge the successful gains made through the long struggle towards equality in the West. We should not give fundamentalists carte blanche to impose their archaic sense of morality onto wider society. Britain’s half-hearted battle against extremism is not producing results. Appeasing religious extremists is an endless task. Proponents of fundamentalism will not stop until all of their demands are met.

If equality is a policy priority in British schools, then it ought to apply all children, irrespective of their sex, caste, creed, colour, identity and sexuality. Muslim communities must find ways to reconcile their beliefs with life within pluralistic, secular societies, in which vulnerable minorities are protected from discrimination.