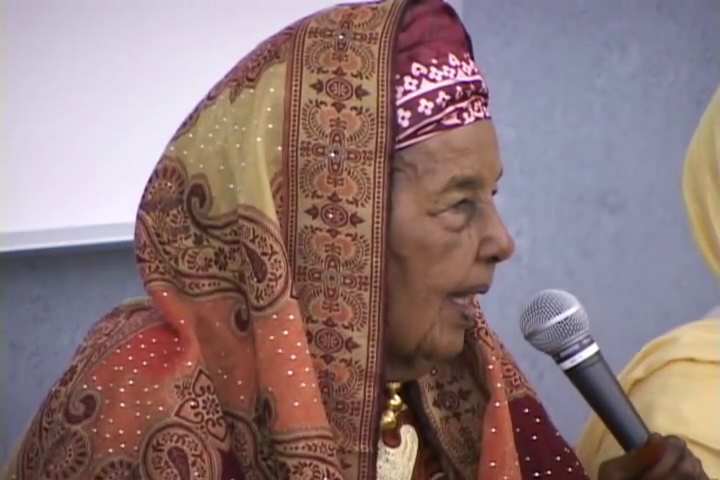 We are the ones who raised the flag on high
God gave it to us, and we were the agents
But we will lose it if we do not stand up in its defence.
Awake, Sisters! A long struggle awaits us!
– Hawa Jibril

Hawa Jibril was a Somali poet and nationalist who composed buraambur, a form of poetry exclusive to women. Hawa’s poetry provides a vital record of the Somali struggle for independence as well as her own life. Poetry is an important part of Somalia’s heritage. With no written language until 1972, the oral tradition is an important vehicle of Somali culture and identity, expressed through strict rhythmic and alliterative conventions. She frequently recited her poetry in Somalia, including at the Somali National Theatre. Several were broadcast on Radio Mogadishu and published in the newspaper Xiddigta Oktobar. She also performed for the BBC Somali Service, VOA Somalia and various Canadian broadcasters.

Hawa Jibril Mohamed was born in Wisil, a small town in Mudung to a nomadic family. With no formal system of birth registration, Somalis at the time used major events to record significant events to remember the passage of time. Hence Hawa was born during a period of Jacjacleey (sparkling rains) she estimated to be around 1920. Her birth was celebrated with a feast, her name was chosen from the Qur’an, and she was gifted with a female goat according to nomadic customs. Her clan were prosperous, and well-respected for their knowledge of Islam. Her father Jibril Mohamed Issa was a religious teacher and poet, known in the community for his generosity.

Hawa was intelligent and able. She flourished under her father’s approval, although he once composed a poem rebuking her for neglecting her flock of goats and allowing them to escape. After a row with her stepmother, Hawa made her first public performance of a poem – a complaint against the hardships and injustices she had experienced in her family.

By sixteen, Hawa was considered eligible for marriage, expected to fetch a brideprice of at least fifty female camels. However, her sister’s widower demanded Hawa as a replacement for her deceased sister. The family, unwilling to bargain and risk returning camels received in brideprice, agreed to marry Hawa to her brother-in-law. She was sent to give him a bowl of milk as a ritual token of their union, but upon seeing how old he was she hurled the bowl into his lap and fled the village. She trudged through grasslands for two days until she encountered a caravan headed for Galkayo which took her in.

Shortly afterwards she married a young soldier serving in the Italian colonial army. However, they separated after five years of marriage. Her husband kept custody of their two older children whilst she retained the youngest. She swiftly remarried, but her second husband was brutally abusive towards her. One night he beat her with a stick whilst she was sleeping. She fled immediately, sending a request for divorce the next day. Her husband was resistant, but eventually, in 1945, she achieved her divorce and moved to Mogadishu.

In Mogadishu she lived with her cousins, who were at the epicentre of the movement for Somali independence. She joined the Somali Youth League, pushing for liberation from colonial Italian powers. This nationalist movement was inspired by patriotic songs and literature, and Somali women were at its centre – raising funds, creating crafts, cooking, organising and participating in rallies and demonstrations for independence. In 1954, Hawa composed her best-known poem Calanka Soomaaliyeedow (O Flag of Somalia) celebrating the moment when, for the first time in its history, the Somali flag was raised.

In 1958, the UN’s decision to increase Somali political participation extended the franchise to women. However, some Somali men remained reluctant to share leadership roles with women. Hawa fiercely criticised their hypocrisy by pointing out how their arguments for excluding women were similar to those of the colonial Italians for excluding Somalis. It was agreed that women should be elected to all party committees.

In 1960, Somalia became a sovereign state. However, it failed to live up to the promise of the revolutionaries. Hawa composed poems critical of government corruption and the male dominance of politics. By the mid-1970s, President Said Barre – a member of Hawa’s clan – proclaimed that Somali women should have equal rights. This did not filter into reality however, and many activist Somali women were frustrated with the slow pace of change. Somalia itself was falling into a larger crisis: following the war with Ethiopia in 1977 the state slid into decay through the 1980s and into civil war by the end of the decade. In 1990, Hawa and her family lived in the centre of a battlefield. She did her best to assist her neighbours amidst violence and looting. However after the immediate fighting had ceased, she learned of the death of several relatives and was prostrated by grief. Later, the compound in which she lived was invaded by gunmen, who killed one of their guards, and shot three men, one of whom was her son-in-law, a former minister in the Barre government. Hawa ended the crisis by handing over all the family’s gold and money. After this traumatising experience, Hawa sought asylum in Canada as a refugee where she joined many of her relatives. Despite this, the transition to a colder climate and an unfamiliar language was difficult for her and she became reclusive.

Her life history formed the central narrative of a dramatic production called Bridge of One Hair which was performed at Toronto’s Harbourfront Centre in April 2007. This production spread recognition of her life and achievements across the city and the Somali diaspora in Canada and internationally.