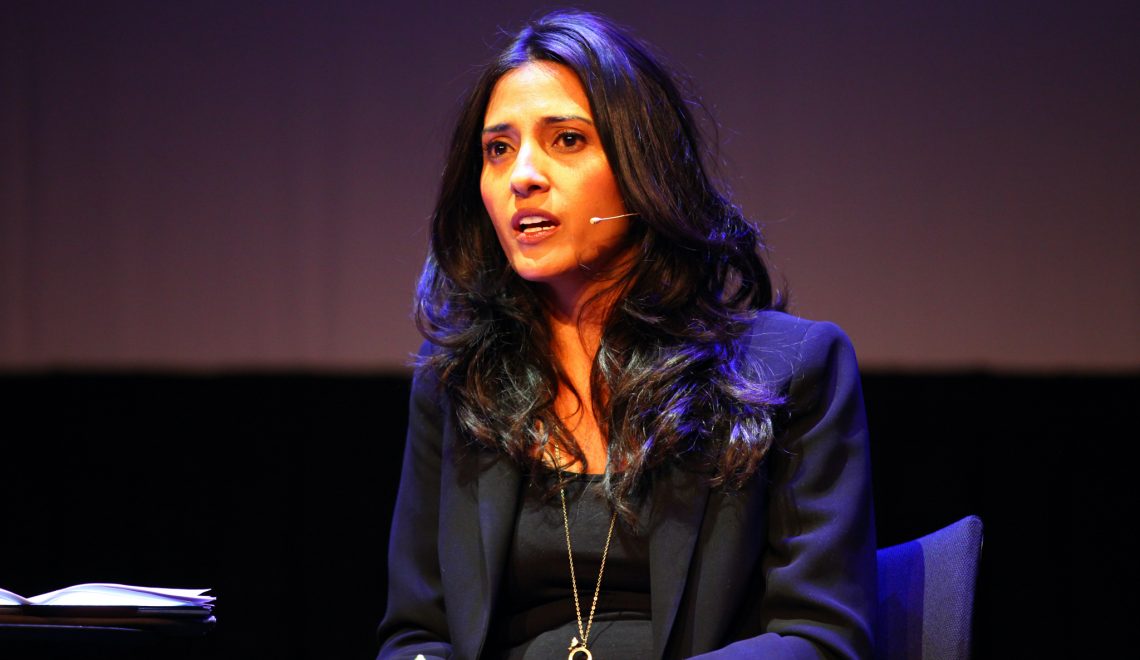 Farah Tazeen Ahmad was a journalist, presenter and writer, and one of the first Muslim Asian women to excel in the British media.

She started her career in journalism as a researcher before becoming a TV reporter in 1997, spending several years in news, consumer & factual features before moving to long-form investigative reporting. She produced documentaries for the BBC and Channel 4, delivered Election Night coverage on BBC1, presented 60 Seconds and The 7 O’Clock News on BBC 3, and for three years was a London-based correspondent for NBC. Her most significant works were documentaries made for Channel 4’s Dispatches series from 2006, which included investigations into sex gangs in the North of England, and the prevalence of cousin marriage within Pakistani communities. She confronted sensitive issues with courage and candour. Other documentaries in this series included exposés of the fashion and cosmetics industries.

When Cousins Marry, filmed in 2010, explored the prevalence of cousin marriage in the UK’s Pakistani communities. It demonstrated the negative consequences of this practice on the health of children, which were related to the multi-generational transmission of genetic disorders occurring in communities where around half of all marriages took place between cousins. Tazeen revealed that her own grandparents were first cousins and that this lack of genetic diversity had led to a high prevalence of deafness in her family, and that five of her mother’s sisters had died as babies or toddlers.

Her most successful documentary, The Hunt for Britain’s Sex Gangs won the Asian Media Award for 2013. It followed the efforts of police in Telford conducting ‘Operation Chalice,’ one of the biggest child sexual exploitation and trafficking cases in the UK. Tazeen explored the police’s attempts to prosecute members of grooming gangs and the struggles of young women and girls to achieve justice in court in a harrowing, unsparing examination of brutal crimes and the complex network of abusers criss-crossing the UK. Tazeen wrote an emotive article in The Mirror, calling for protection for the victims from the ‘sadistic sex gangs’, as well as from the ‘devastating insensitivity’ of the British justice system, where vulnerable young women were subjected to invasive and derisive cross-examination by defence barristers.  The Royal Television Society described the documentary as the ‘culmination of a remarkable body of work spanning almost two decades. It required the negotiation of unprecedented behind the scenes access, great sensitivity towards both victims and investigators and unquenchable journalistic perseverance.’ Another documentary exposed the issue of violence against children in mosques, which led to the arrest and imprisonment of an imam, and the replacement of an entire school board.

In 2017, she recorded a TedX talk in Bergen, Norway on the importance of emotional intelligence, a skill which she deployed in her journalism and film-making. She was the founder and director of EQ Matters, a consultancy specialising in emotional intelligence, delivering services to executives and teams working in pressurised environments. She stressed the importance of authenticity in relationships. She also wrote a book called The Checkout Girl which was based in her undercover investigations of low-paid women’s work in the UK, exposing the intense surveillance of staff and the demanding nature of the management.

Besides the Asian Media award, she also won a Royal Television Award and was nominated for a BAFTA. She also sat on the juries for the Royal Television Society and the BAFTA committee. As a polished professional, she was in demand for public speaking events, particularly moderating debates. She was a mother to two sons. From a personal perspective, she has blogged about the dilemma of protecting them from disturbing content whilst acknowledging the painful realities the world they live in – which were central to her career as a journalist.

She also wrote an intimate, personal account of the impact of stress on working mothers. She was patron to MOSAC, a charity supporting parents of children who have been sexually abused and Woman’s Trust, which provides support to survivors of domestic abuse.

She died a little after her 48th birthday from cancer. Her death was announced by her brothers, and was received with many tributes from her colleagues in the media industry.

Producer and Director Andrew Smith said, ‘Tazeen and I worked closely together on a year-long Dispatches investigation in 2010/2011, which led to the imprisonment of a religious teacher in a mosque in the north of England for repeatedly assaulting the vulnerable young children in his care. We also exposed hate teaching in a leading religious secondary school; leading to the dismissal of the headmaster and a number of teachers.

These are difficult topics, and potentially exposed Tazeen to allegations that she was attacking her own community and encouraging prejudice against religious schools. She took all this into account, but what drove her to take on these tasks was the thought of the violence and the injustices being meted out to the children themselves; that was her overriding priority and she was undoubtedly right.

Tazeen was a brave and very clear-sighted journalist, very willing to confront taboo subjects if it felt important enough to do so, and she had a rare gift of combining a keenly forensic, objective interviewing style with the ability to be genuinely empathetic towards victims of injustice, making them feel comfortable and creating a space for them to feel able to tell their stories.  She was also fearless in the so-called “doorstep”, confronting and calling to account wrong-doers on camera.

Tazeen was also a mentor and guide to many young people, often women of Muslim background, who were trying to make their own careers in an industry which had historically excluded them. She did a lot of this mentoring while juggling motherhood – she has raised two fine young boys –  writing a book, speaking, running psychotherapy classes,  as well as carrying out complex and challenging journalistic investigations.

She was very warm and funny as a person, a delight to work with; after first becoming my colleague, she became a lifelong friend; there are many people now, myself included, who have a huge Tazeen-shaped hole in their lives since her passing.’

sister-hood founder Deeyah Khan added, ‘Tazeen was a pioneering figure in British media, She was amongst the first Muslim Asian women to rise to the top, becoming widely admired and celebrated for her courage, compassion and ground-breaking accomplishments and confronted sensitive issues in her community with honesty and integrity. She paved the way in an industry that is not always accepting or supportive of women from minority communities.  Here’s to you Tazeen. You will be missed, but there will be many young women following in your footsteps. My heart goes out to her two children.’

Tazeen’s brothers stated, ‘We remain immensely proud of all she achieved – as a mother, journalist, writer and for her coaching work. So many people have been in touch remarking on her powerful ability to turn around people’s lives for the better. She was so proud of her two young boys who are left to remember their loving, kind, smart, nurturing, beautiful mama.’