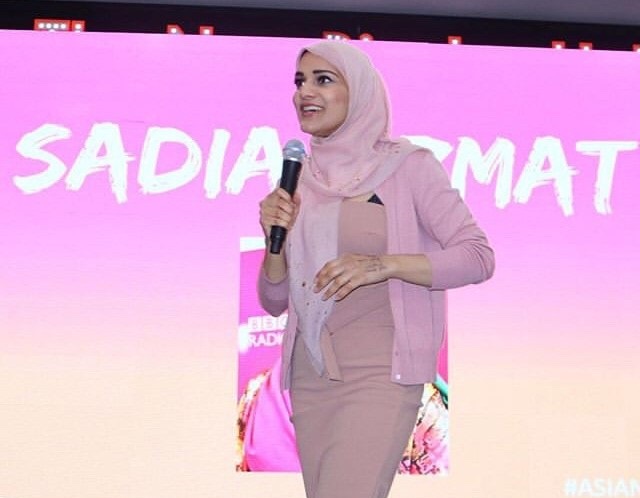 Sadia Azmat is a British Asian Stand-up comedian and writer from East London. sister-hood asked her about sex, growing up between cultures, and how she made her way into comedy.

You recently wrote an article about sex during Ramadan. What was the response?

The response was mixed. I got a lot of messages from people who thanked me for talking about this. Lots of Muslims who could empathise with the way I felt, as well as non-Muslims welcoming my perspectives. There were a smaller number of critical views/comments – exclusively from Muslims – espousing judgement and condemnation for even mentioning the idea that I could possibly be horny from time to time. They really reinforced the need for these conversations to take place. I also had a handful of opportunists reach out – who clearly hadn’t fully appreciated what I was saying – seeking one night stands. I was surprised as the article went viral and was subsequently featured by a UK tabloid and Sputnik news in Russia!

You’ve said you don’t feel British or Asian. What have you drawn from each culture?

I think British and Asian cultures are lost in translation – both amidst a great transition. Both cultures are so intertwined and interdependent, and yet are almost defiant of this. From my British heritage, I have amassed freedom and the fact that it’s okay to be wrong and to fail. An ability to pursue passions, even though they may never lead to anything tangible other than the fun they provide. It has given me space to explore my self and individuality. However, it is difficult to pinpoint what being British is. Coming from such a rich diaspora like London, it reminds me not to be hung up on labels.

In contrast, my Asian side is a taskmaster. It instils a drive in me to work hard, to be ambitious, to be on time, to be hungry. When I think of my Asian side it reminds me of what I have lost. I hardly speak the language. I hardly know the streets of India. There is a spiritual easiness when you go there that I don’t find in London, where stress is such a driving force. It’s like missing something I never had, but still feel a strong sense of responsibility towards. It motivates me to stand out and not to be seen as part of a collective. To defy the stereotypes of Asian women being cast in the shadows by going and making things happen for yourself. A lot of the traditional Asian views are those of adapting and being something you’re not to ‘fit in’. As a comedian I’m comfortable being an outsider – whether or not I fit in with someone’s expectations.

Being British Asian, there is a constant inner battle inside me that I am always trying to reconcile.

You were working in a call centre when you decided to try out being a comedian. How did that happen?

I worked for an institution that had high-profile clients. During a monthly one-to-one with my line manager I made a comment about whether one of the clients might be able to help me break through as a writer. Incidentally a stand-up comedian had been interviewed for the Banks’ magazine. My manager and the magazine’s editor kindly put me in touch with the comedian. We had dinner, chatted… and the rest is history.

What have been your best and worst experiences of stand-up?

Ah, good question. See, in comedy the bad is good! But honestly, some of the people I have met and worked with are my best experiences in stand-up. Having people care and believe in you like my wonderful agent Chris – it’s like having a family. Some of the best experiences are when an audience member thanks you and says how much they enjoyed your work. Also the projects I have done like my BBC sounds podcast ‘No Country For Young Women’ and BBC Radio 2 ‘My Single Life’ where I get to have fun and tell jokes for a living.

The worst experiences are when people don’t get jokes or subtext. You never want to be in a position where you have to explain your jokes. I think this comes down to people who want you to be a spokesperson for your thing – whether that’s race, religion, gender, as they’ve been trained to expect – rather than letting go and enjoying the ride.

What were the reactions to your career choice in your family and community?

I live alone. I have not shared my career choice with my family. My mum suffers from bipolar disorder and I wouldn’t want to cause her unnecessary worry. Also, the stand-up scene is a world very foreign to them. I don’t need anyone’s approval or blessing. In relation to community, this comes up a lot. The community I truly belong to is the community of comedians. They enjoy my comedy and we support one another and make one another laugh along the way. In terms of a wider community, I think the reactions are quite widespread. There are some people who get it, and others who assume from the surface I’m just a ‘halal comedian’ – whatever that means. I think it’s still a culture shock for traditional people to watch someone like me speak their mind.

How can we work towards a healthy female expression of sexuality in communities that remain obsessed with ‘honour’?

Honour leads to killing so it’s overrated! I think before we even begin to tackle sexuality we need to try and conquer the basics – like respect. There’s a lot of talk about women’s rights in traditional circles, but that’s all there is. It doesn’t help that so many in our communities are nurtured in the mind-set that boys are superior to girls. We should listen to one another with an open mind. Sometimes opposing views can be uncomfortable but good can come from listening to them. We don’t always have to agree, but everyone has a right to be heard. There’s a massive danger when views or people feel they are being oppressed/ignored… which can lead to situations like what happened in Charlottesville.

We can start to redress the balance by emphasising that women have rights and needs and are not objects. In countries like India, which is plagued by sexual repression, women need to be liberated from old school ideologies and taught to challenge out of date traditions and how relevant they are in today’s day and age. Issues that it would be helpful to educate guys on would be consent, women’s rights… and where the female G-spot is.

Fear generally prevents people from speaking out. Have you felt too afraid to speak openly on the topics you do and if so, how have you found the courage to do so?

Love always wins. I think to be fully open with yourself and others is a process. There are times where you can feel more guarded than others. For instance, you feel no sense of judgement with your friends, so you can feel very free. I don’t view what I do as being courageous – it’s my job. I’ve come to accept that some people won’t like what I have to say –  and that’s okay. So I’m very grateful for when it is well-received but it’s not something I take for granted. At the end of the day, being truthful is critical in stand-up comedy and it’s not something I can afford to compromise on. I don’t want to live my life with regrets and a big part of being open about my views is based on having good people around me. The fear of not being heard is greater than the fear of not being understood. So for me it’s ensuring I get my point of view across regardless of how it may be perceived.

Do you think there has been a changing atmosphere in the UK after Brexit? How have you been affected?

I think in terms of the media there has been less air-time dedicated towards the marginalisation of Muslims because now everyone feels marginalised. This is sad but I hate to say it: what goes around comes around. For me this is just business as usual. There are white, middle class people out there who feel worse than I do. It’s also weird when people take offence on your behalf. The worst part for me is the knowledge that things can change for me based on the actions another Asian takes. So if an Asian terrorist were to perpetuate another attack then the cycle would start all over again.

What does being a Muslim mean to you?

Being Muslim means striving for better character and being cognizant of the fact that there is a life after death in which my actions will be held to account.

What’s your advice to young women of Muslim heritage growing up in the UK today?

Try not to impress others or to be concerned with what other people are thinking or doing. Find your faith, find your happiness, and find your own way. If you make mistakes along the way then great, this is how we learn. We are always taught to be there for others so remember to be there for yourself. You are special, important and unique, and where one door closes another one opens.

What’s your next move?

I’m performing my stand-up comedy show called ‘Random Bag Check’ at the Edinburgh Fringe Festival 2019 Aug 3-25th 15.05 – 16.05 at Voodoo Rooms, French Quarter at the Free Fringe with fellow comedian Vittorio Angelone. My BBC Radio 2 programme ‘My Single Life’ will be released on July 14th, and will be available on Radio 2, BBC Sounds App, digital radio and 88-91 FM. Series 3 of my BBC Sounds podcast No Country For Young Women is due out September / October 2019. Series 1 and 2 are available on catch up.

I am hoping to perform more live comedy overseas and to get going with more exciting projects so watch this space!