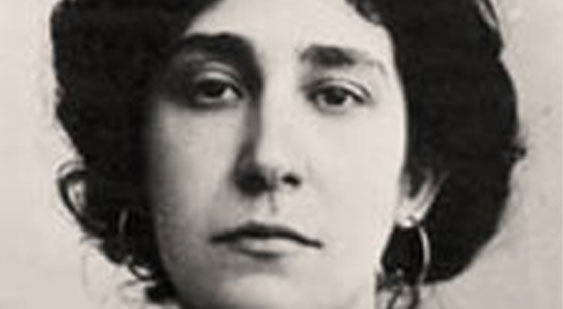 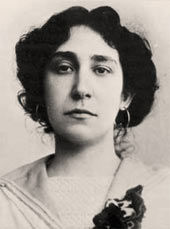 ‘Leda isn’t the type to ask for directions. She creates her own path for herself, and although it twists and turns, it can only be her path.’ Leda Rafanelli, marginal note.

Writer, anarchist, publisher and convert to Islam, Leda Rafanelli lived through the rise of fascism in Italy. She was the author of over a dozen novels and founder of one of the most significant libertarian publishing houses in the 19th century. Born to a modest family in Tuscany, Leda was a talented writer from adolescence. At 20 years of age after some kind of scandal, she moved to Alexandria in Egypt which had a large Italian expatriate community. She came into contact with the anarchist movement in the region, including writer and poet Giuseppe Ungaretti. She quickly gained a reputation as a ‘propagandist’ for her skill as a writer, as well as learning the useful publishing skill of typesetting.

At the time, the term propaganda referred to persuasive writing of all sorts, not biased or misleading texts developed to espouse a particular political point of view. Many of Leda’s early writings were distributed as pamphlets and articles, designed to reach the widest possible audience in order to spread her political message. Her writings might be best understood as social critiques, stimulated by empathy for the sufferings of common people living under oppressive rule, focusing on the lives of characters who were otherwise ignored – underdogs and outcasts, set in asylums, brothels and jails, in the manner of French author Emile Zola. She also wrote on the topics of anarchist philosophy and current politics.

Although critical of gender roles and the restrictions on female sexuality, Leda disdained the contemporary feminist movement, subscribing to the belief in gender differences to the extent that she held that men were women’s ‘natural’ superiors.

It was in Egypt, at 20 years of age, that Leda converted Islam. She favorably considered the Arab cultures she came into contact with, which contrasted with her experiences of a Europe which at the time was undergoing rapid industrialization. With a Sufi-inflected understanding of Islam, she held that the faith supported the natural dignity of all human beings, believed in the ‘natural’ order of Islamic societies (which she held to be superior to European political institutions), and felt the sense of ‘God’s will’ – a phrase which frequently recurs in her writing on Arab societies. She wrote several short stories, mostly for children, set in Northern Africa in order to share her understandings of Arab culture and Islam. Biographer Andrea Pakieser describes Leda’s relationship with Islam as a private spiritual resource which informed her interior life, in contrast to her public and secular life as a publisher and political activist. In the absence of any developed Muslim community in Italy, Leda’s version to Islam was mostly developed according to her own readings of Islamic and Arab literature. She studied the Arabic language in order to read the Quran, and to explore the religion in depth. Although in a sense her faith was a private one, it was also displayed through her adoption of exotic pseudo-‘Eastern’ style dress, including long caftans, head-dresses and layers of jewellery, as well her faithful adherence to the Ramadan fast. In accordance with her respect for Islamic culture, she was vehemently anti-colonial, a view expressed particularly in her novel The Oasis, which was published under the nom de plume Etienne Gamalier.

Her first novel was published in 1904 and features the adventures of two sisters, and introduces the theme of free love. As an advocate of ‘free love’, she led an eventful romantic life, even at one point being pursued by Benito Mussolini in his pre-fascist days. She took many lovers over her life. Although married to Luigio Polli in 1902, she had a 23 year relationship with Guiseppe Monanni. She also had relationships with the futurist painter Carlo Carrà, Rabbi Emanuel Taamrat, and the soldier/interpreter Adem Surur, amongst several others.

With her long-term lover Monanni, she founded a libertarian publishing house which would go through a variety of incarnations due to pressure by the fascists who had seized power in 1922. She edited books, magazines and pamphlets which were published sporadically until the beginning of the First World War. Leda and Monnani identified that within the repressive climate of Mussolini’s Italy,  subversive fiction escaped censorship more easily than more blatant political writings. The house also produced translations of other works into Italian, including the work of Maxim Gorky, Upton Sinclair, George Bernard Shaw, Aldous Huxley and Friedrich Nietzsche.

In 1944, Leda moved to Genoa to live with her son’s family. She remained in Genoa after his death that same year for the rest of her life. She earned money through fortune-telling and explored her interests in Eastern philosophies, whilst developing a semi-autobiographical history of the Italian anarchist movement in the 20th century, which was never finished. Her work has been collected in the Camillo Berneri Archive in Reggio Emilia. Extraordinary, fascinating and occasionally paradoxical, Leda Rafanelli was a woman who had  the courage to defy the expectations of her time.