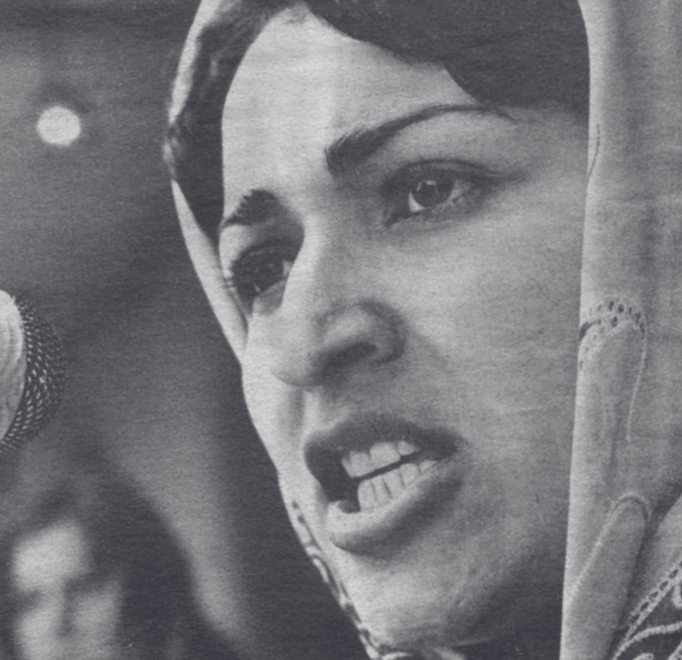 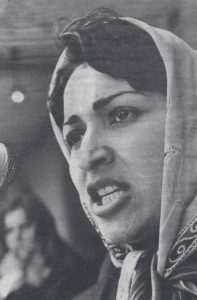 Meena was born into a middle class family in Kabul. Her grandparents had relocated from a rural region and in some ways, the family still abided by rural traditions around women’s roles. Meena’s father had two wives, and the girls of Meena’s generation were the first to receive formal education. While her family had some ties to the royal family, her father rejected these connections to made his own way through life as an architectural engineer. Meena was idealistic, with little interest in money, make-up or marriage; instead she was moved by social injustices, including her own family’s treatment of their servants, and her male relatives’ treatment of their wives and daughters. Meena was a keen reader, with particular interests in history, literature and women’s activism. Through her studies, she was able to understand her own relatively privileged position within Afghan society, the differences in women’s roles across countries, and the burgeoning influence of feminist thought at the time.

In the Afghanistan of Meena’s youth, any movements towards the liberation of women by the ruling dynasty met hostile responses from rural regions; however, it was nevertheless a time of change, with women announcers and singers featuring on Radio Afghanistan for the first time. More significantly, women were given the vote in 1964. By the time Meena began her studies at Kabul University, more and more Afghan women were entering professions, from engineering to politics. However, in rural areas, women’s roles were still very limited: they were regarded in many ways as inferior to men, and restricted by tribal codes of ‘honour’.

While studying at Kabul University, she joined in the lively atmosphere of student politics, during a period when discussions about the future of Afghanistan were raging. The questions of modernity, secularisation, and the role of Islam in the State were the subject of vigorous debate – and in some cases violence, such the occurrence of acid attacks upon young women for wearing Western dress at the time. Despite women often being the targets of such violence and subjected to enormous social injustices, Meena identified that although there were organisations promoting a range of political positions, there was no organisation specifically dedicated to promoting women’s interests. This inspired her to found the organisation Revolutionary Association of the Women of Afghanistan (RAWA) with five of her friends. One of RAWA’s first actions was to establish literacy classes for Afghan girls, which was intended as a stepping stone to developing a greater political consciousness. RAWA’s provision of education to girls was continued throughout the period of political turmoil which was to follow.

From the offset, members of RAWA were aware that their work would be controversial and might expose them to danger. They organised through a loose, anonymous network, in order to protect themselves from being identified. The situation became even more complicated after the Soviet-backed coup against Daoud’s increasingly autocratic rule in 1978. The new government followed its predecessor in attempting to modernise women’s roles through education and raising the age of marriage, but was more forceful in attempting to push these reforms into rural areas. These reforms were among many moves resented by large parts of the Afghan population. The ruling powers responded to this resistance aggressively, imprisoning tribal leaders, religious fundamentalists and other opponents. The situation degenerated into armed combat between the government and resistance movements, culminating in the Soviet invasion and occupation of 1979. Resistance to Soviet rule was expressed via the muhajadeen who often used their victories to establish brutal fiefdoms, yet who were nevertheless portrayed as brave freedom fighters by the United States.

Meena married Faiz Ahmed in 1976, but the couple were often separated through their dedication to various political activities. She had a charisma that drew people towards her, expressed through her commitment and dedication to women’s rights, but also through the instinctive kindness and compassion that had been part of her character since childhood. These characteristics made her very effective at recruiting women to RAWA. RAWA members describe her as hardworking, tramping around from dawn to dusk in a shabby burqa, building the organisation’s networks, even while heavily pregnant. Her activism often took her away from her family – a painful sacrifice for her, but one which she judged worthwhile.

By 1980, many RAWA supporters had been imprisoned, including three of its five founding members. Despite this, in 1981, Meena launched Payam-e-Zan (Women’s Message), a magazine in Dari and Pashtu. However difficulties in production meant that the publication was on hiatus between 1983-87; the original four issues remained in circulation throughout this period. By this time, members of RAWA asked Meena to take up residence in Pakistan, for her own safety. She settled in Peshawar at first, and then moved on to Quetta, believing it to be safer. She continued networking with the many Afghan refugees seeking sanctuary in Pakistan, including establishing schools.

In 1986, Faiz Ahmed was kidnapped and killed by the Hezb-e Islami faction, which was headed by Gulbudeen Hekmatyar. Meena carried on working, regardless of her own pain and fears, for a few months; however, in February 1987, she failed to attend a meeting. For six months, her fate was unknown until two men connected to Hekmatyar and KhAD confessed to her killing, and took authorities to her body. She had apparently been strangled.

With All Our Strength: The Revolutionary Association of the Women of Afghanistan

Remembering Meena Kamal: Hope Is The Thing With Feathers