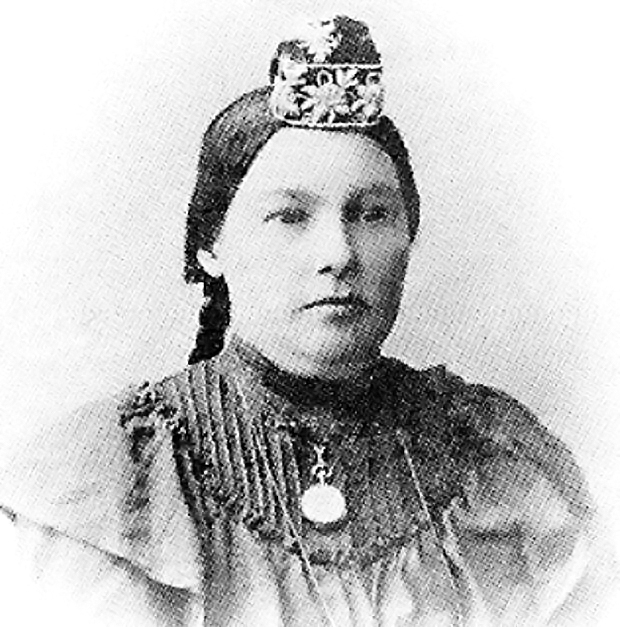 Mukhlisa Bubi was the first woman to be appointed a qadi (judge) in the modern Muslim world. She also founded the first modern girl’s school in Tatarstan.

Mukhlisa came from the Russian Republic of Tatarstan, which had a legacy of Islam dating back to 922. Its capital, Kazan, was conquered in Ivan the Terrible in 1552 and the population forced to adopt Roman Catholicism, although most only did so nominally. Under Catherine the Great, this policy was reversed and religious diversity permitted in the region, including permitting the use of shari’a law for adjudicating affairs between Muslims, with further relaxation under the rule of Tsar Alexander, her great-grandson.

Her father was a mullah serving the village of ij-Bubi, for which the family were named. Mukhlisa received her primary education at home with the Qur’an at the centre. Her mother and grandmother were both community teachers (abistays) who were often married to clerics. Abistays taught local children the basics of reading, writing, religion and good manners, as well as recruiting exceptional girls into further education. Mukhlisa showed curiosity and talent, and her father and brothers helped her to develop her skills. At 18 years of age, Mukhlisa was being groomed to become an abistay herself.

An arranged marriage to a local mulla proved unsatisfactory. They separated when she was 28, although he refused to grant her a divorce for a further 20 years. Mukhlisa and her brothers were attracted to the Jadid movement, which had become popular in Kazan by the 1890s.  It promoted educational reform for Muslims, shifting from traditional rote learning to usul al-Jadid, a form of education informed by modern pedagogical methods and the renewal of Islamic teachings. The education of women was an important aspect of their worldview and their publications featured exceptional women contributing to society as teachers and nurses. Mukhlisa’s brother Ghabdulla argued for the equality of women and men in Islam, and saw education as the route for achieving this.

Informed by these values, Mukhlisa and her brothers founded the first modern school for girls in Tatarstan, with the support of their parents. She taught literacy and household skills as well as religious teaching and Arabic calligraphy. Many of her students became teachers themselves, as the school granted them certificates qualifying them as teachers. Being the first of its kind, the school was popular with Muslim families, and attracted students from across Russia.

The Jadid movement in Tatarstan raised the suspicions of the Russian state, which was suspicious of Turkish influences, and concerned by rhetoric supporting pan-Islamism coming from the Jadid movement. Officials closed down the ij-Bubi school in 1911, identifying it as an epicentre for potential radicalisation. Several of the staff were arrested, including Mukhlisa’s brothers. Undaunted, Mukhlisa accepted an invitation to direct the Söyembikä school in Troitsk. The school was named for a 16th century Tatar heroine and funded by a wealthy Muslim family.

After the Russian Revolution in 1917, women gained the right to vote and many subsequently became involved in politics in their communities. In April of that year, Mukhlisa was part of a group of Muslim women that organised the All-Russian Muslim Women’s Congress. They outlined proposals to reform women’s social status, increase their rights in the family and promote equality between the sexes.

These proposals were then presented to the All-Russian Muslim Conference which was held in Moscow the following month. Approximately nine hundred delegates took part in the event; 112 Muslim women were delegates. Although they represented a wide range of social and intellectual backgrounds, the modernist factor formed a majority. Women’s rights in Islam became the most hotly debated topic during the event. The debate rolled on for two days. For the first time in the history of the Volga-Ural area, Muslim women were present at discussions that concerned them.

While the Conference balked at the women’s condemnation of polygyny, they did democratise the structures of Muslim organisations and made the unprecedented decision to appoint a female qazi – a unique decision in the modern Muslim world. Mukhlisa was selected out of three contenders for this role. She was not present at the conference, but her reputation spoke for itself. Rozaliya Garipova suggests she was selected as a moderate candidate, acceptable to conservatives and reformers alike, and not tarred by association with the contemporary feminist movement.

She left her career as an educator to dedicate herself to Islamic jurisprudence for the next twenty years of her life. She directed the Department of Family Affairs, addressing issues of marriage, divorce, dowry and inheritance and their impacts upon women. She continued to educate mullas and imams in their obligation to protect women’s rights – including refusing to allow men to marry more than one woman without the consent of the first wife. She insisted on the importance of women in their communities, urging for the importance of the roles of abistays and for the inclusion of women and children in mosques. She drafted a model marriage contract designed to maximise women’s rights within the framework of shari’a.

However, as Stalin succeeded Lenin as leader of the Communist party, the pressure on Muslims increased. Within just a few years of his repressive roule, the networks of Muslim civil society were devastated. Tatarstan was specifically targeted for a de-Islamicization programme. Muslims were accused of treachery, entire villages displaced and Muslim religious leaders exiled to the gulags. In 1937, Mukhlisa was targeted by Stalin’s security forces and executed under trumped up charges of collaboration with foreign intelligence agencies.

In 2014, the Tatar Museum of Islamic Culture of Kazan created an exhibition in her honour.